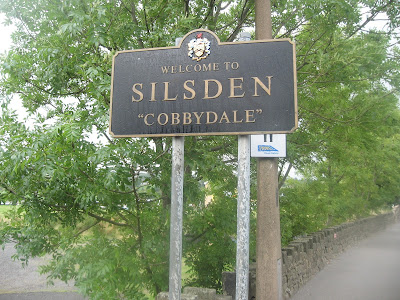 The draw for the extra preliminary round of the FA Cup failed to throw up any decent games involving my local clubs, as I was hoping to see the likes of Dunston get a good draw at a previously unexplored ground. So after careful consideration of over one hundred cup ties, I made an easy choice by choosing the Yorkshire derby between Silsden AFC and Bridlington Town with a Wetherspoons tour of Leeds added to my matchday experience.

I arrived in Leeds just before 11am and started the morning browsing the city’s record stores, namely Jumbo Records, Crash and my personal favourite Relic found at the top of New Briggate. Once the clock hit noon it was time for my ‘Spoons tour to start, beginning at the ‘Stick or Twist’ followed by ‘Hedley Verity’ ‘Cuthbert Brodrick’ and finally ‘Beckett’s Bank’ with the first pub providing the best pint of the day – Ilkley’ Summer’(4%) which I awarded 9/10. After a decent bevvy I caught the 1356 Skipton train, alighting at Steeton & Silsden station, which is about half a mile from the ground, found on the other side of the River Aire. 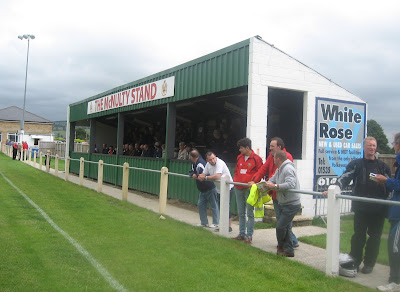 Silsden is mentioned in the Domesday Book as Siglesdene, where it was noted as the most important village in Craven. The town is a civil parish on the northern slope of the Aire Valley in West Yorkshire. The Leeds and Liverpool canal runs along the lower edge of the town, which provided trade during the Industrial Revolution, although generally Silsden is an agricultural area and a former mill town.

The original Silsden AFC formed in September 1904, playing on the same ground as the current team. There have been many sides that have used the club name, with a lot of stopping and starting over the years, although in general the town has seen a lot of local success in this particular area of Yorkshire.

The current set up have played since 1996 and have rapidly rising to the North West Counties League in just eight years. The club started life in the Craven & District League, progressing from Division Two to its Premier Division, which they won with an unbeaten record in 1998/99. They joined the West Riding County Amateur League 2nd Division the following season and progressed through the leagues, including another undefeated title winning season in 2002/2003. The following season they won the West Riding County Challenge Cup for the third years on the spin, one of only two teams to achieve this feat. The Cobbeydalers joined the North West Counties League in 2004 and won promotion to the top division in their debut season, finishing runners up to runaway winners Cammell Laird. 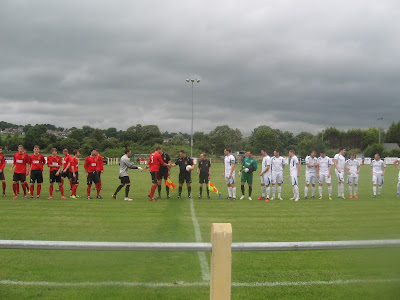 The club played their original North West Counties League home games at Cougar Park, home of the rugby league club Keighley Cougars, while the junior section continued to play at Keighley Road. I actually attempted to see the club play one of their last remaining fixtures at the ground in March 2010, but the game I was due to attend was hastily rearranged so I ended up redirected myself to Halifax instead.

The Keighley Road ground was upgraded during the 2009-10 season, made possible through the hard work of the club committee with the assistance of the Football Foundation, Sports England and the Asda Foundation, plus local businesses and sponsorship.
The ground is set in the heart of the Yorkshire countryside, with views of the hills of the Aire Valley, the sound of cattle in the distance and the distinct aroma of manure in the air. (Especially in the windy second half..Eddy)

You enter the ground next to the cricket pitch, where rain had stopped play with the home side on 36-3. At the paying entrance I sharply parted with ten and a half quid, for admission, programme, pin badge and a golden goal ticket. I’ve always liked these tickets and it’s a shame they’re a rarity nowadays, as I much prefer them to a raffle because at least it gives you an extra interest in the match.

On entering the ground, to your right is the £1.2m clubhouse which opened in May 2009. The building has a bar & function room and houses nine changing rooms for the football and cricket teams, as well as match officials and treatment staff.
The McNulty Stand is next to the admission entrance and has three rows of black benches with a green and white outer frame. The refreshment bar is in the centre, parallel to the halfway line next to a diminutive covered stand which has four rows of terrace steps. The other three sides are open standing with the team dugouts on the opposite side and six separate floodlight pylons. The work was completed and the ground officially opened in August 2010. The record attendance against non-league opposition is 242, however the ground has witnessed a four figure gate when 1,125 saw the pre-season friendly with Bradford City in July 2011.
From the start of this season the name of the ground has changed to Angel Telecom Stadium following a five-year sponsor package with the Bradford-based telecommunications company, although for traditional purposes I’ll stick to Keighley Road. 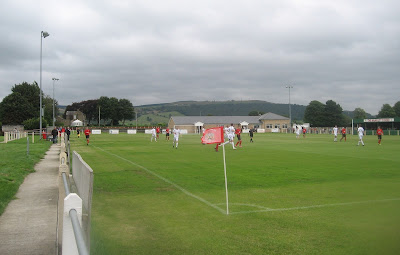 This FA Cup tie pitted clubs from opposite sides of Yorkshire both playing in their Premier Division of their respective league, and it was the club from the East Riding who progressed to the next round.

Brid were gifted an early lead when a routine back pass saw ‘keeper Ed Hall kick fresh air which allowed Scott Phillips to nip in and slide the ball into the empty net from a tight angle in the 14th minute (Bugger! I had 11 in the golden goal) The visitors first half superiority saw the lead doubled when a left wing cross picked out Joel Scott who fired home from the edge of the box, however the half may have had a different complexion if a strong penalty shout from the home side had gone in their favour.


Silsden made a decent fist of it in the second half, although the torrential rain and swirling wind didn’t help their cause. Several times they beat the offside trap but were unable to seriously test the goalie. When the goal did arrive it came out of the blue. A cross from the left saw Chris Wademan rise up above the defender and his header found the top corner of the net. The equaliser never looked likely and their misery was complete when Stephen Throup was sent off for a professional foul deep into injury time. 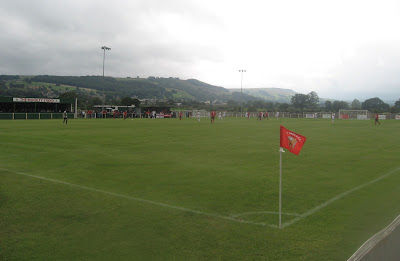 Before catching the 1727 to Leeds I called into the clubhouse to check on the full time scores, having a LOL moment after seeing one result which was quickly turned into a FFS seconds later with another poor result for one of my teams. I had a great day in Leeds and enjoyed the serene setting of Silsden, but after all this football and beer talk I know what my dozen loyal reading really want to find out about – what happened in the cricket? Well after 55 overs of play the home XI were all out for 101 with the visitors on 19 without loss, before rain stopped play again. The umpire was hopeful of going back out but the cricket players were found frightened in the changing rooms, afraid of a bit water and the bad light outside. 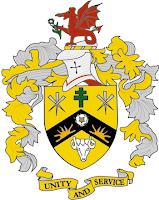