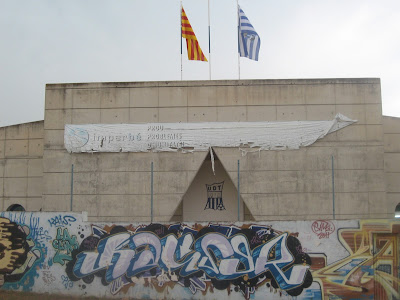 This years family summer holiday was in the Catalunya region of northern Spain, staying in the popular holiday resort of Salou in the Tarragona province.
When the holiday was booked, one of the grounds I was really hoping to visit was Nou Estadi, home of Gimnastic de Tarragona, but unfortunately their pre-season glamour friendlies against Villareal and Real Zaragoza took place on the previous Saturdays before I arrived.
Thankfully there we other options available, including seeing Nastic away in the neighbouring coastal town of Torredembarra. The municipality takes its name from the agglutination tower in Barra and is located on the Gold Coast in the west contrasts with Altafulla, the north to La Pobla de Montornès and the east Creixell. The town is located 13 miles north-east of Tarragona and approximately 60 miles south-west of Barcelona. 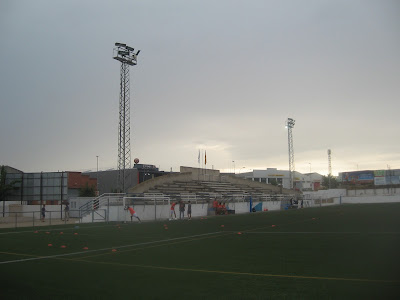 Union Deportiva Torredembarra formed in 1922 under the name of Union Sportiva Torredembarra by the club’s first president Stephen Huguet Borras. Initially the club focused on football only, becoming a sports club in the 1970’s. Nowadays the club runs a variety of community based sports, including tennis, swimming, martial arts and skating.
The football club play in the First Catalan league, which is the equivalent of the fifth level on Spanish football. The league is organised by the Catalan Football Federation split into two regional groups; Group 1 consists clubs from the provinces of Barcelona and Girona while UD Torredembarra play in Group 2 within the region of Lleida and Tarragona. 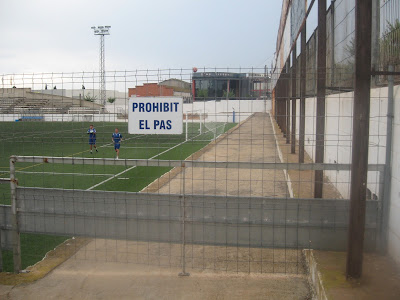 The Smudger family set off from Salou on the Regional Renfe train service which runs from Cambrils to Barcelona. The distance between the two coastal resorts was only five stops, which took approximately half an hour and cost only 6.50 euros return. Overall our 10 night stay in Catalan country was terrific apart from just the one piss poor night - this was it. Torredembarra may be a nice little Spanish town but there’s not much to do on a wet Wednesday night. As soon as we stepped of the train it began to rain, apart from the swimming pool and the Mediterranean Sea this was the only time we got soaked during the vacation. We had a brief walk around the town, the breadknife purchased an umbrella, then me and my son James went to the match, leaving Debra and my daughter Laura to discover the delights of an evening in Torre. 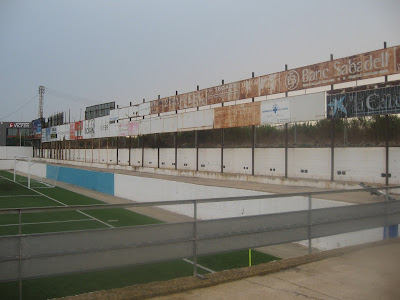 The Camp Municipal de Torredembarra is found on the edge of the town. The ground perimeter is covered in graffiti, but once inside the ground isn’t too bad. Admission is taking at a paying box at the main entrance where you purchase a 3 euro ticket, which is then hole punched by the man at the gate. The changing room and offices are underneath the one stand, which has 8 steps with plate seats fixed onto the terrace. The structure is a triangular type shape which gets narrower then levels off  towards the peak. The dugouts are in front of the stand with a pair of floodlight pylons at each side.
The far side is about four foot above pitch level, with a refreshment kiosk and seats provided by seven stone benches at the front on the walk way. There’s small standing pathways behind each goal with one end currently out of bounds.
Typically, with it pittiling down the ground is open with no cover, but I imagine it to be a nice venue on a warm night. 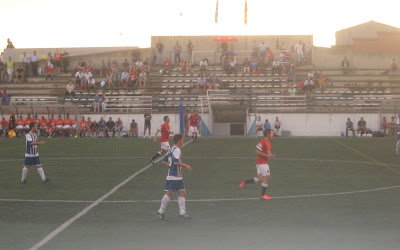 As you’d expect, me and my laddie were the only two “foreigners” at the game which included in attendance a section of teenage Nastic fans with flags and scarves, although I did see one bloke with an Everton away shirt who looked the spitting dabs of
Kenny ‘Fucking’ Powers, but when I heard him speak he spoke with local tongue.
The rain finally stopped just as the match began, but the first half of the game was best described as magnolia - plain, quite dull and lacking any colour.
In the second half it was as if Nastic decided to stop messing about and go and win the game, which they did with ease with four goals in the last 25 minutes. Aleix Coch got on the end of a right wing cross to open the scoring on 64 minutes, followed by a brace from Perera(72,85) either side of Marcos Jimenez de la Espada shot from 20 yards on 74 minutes.
After the game we walked back to the train station to find bread knife and daughter playing cards at the train platform, which they said had been the highlight of their night. We arrived back in Salou and had good drink, slap-up meal and a late night out to make up for a disappointing evening all round, when the rain in Spain fell mainly in Torredembarra.