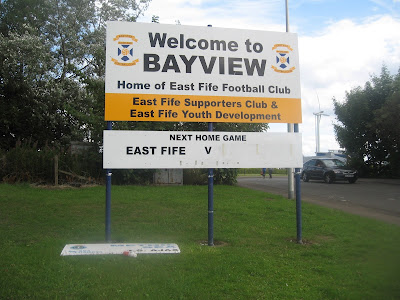 With huge thanks for the assistance of 100FgC Squad#155 James Little, it was possible to add another Scottish League ground to the list. I’m now starting to run short of grounds in this category that I can do on a solo day-trip, East Fife being a prime example as the nearest rail station to Bayview is eight miles away in Kirkcaldy.

East Fife play in the eastern coastal town of Methil in Fife, which was formerly part of the Burgh of Buckhaven & Methil, within the urban area of Levenmouth. James arranged to pick me up outside Waverley Station at 1.30pm, the car journey from Edinburgh takes about an hour to ninety minutes, so we arrived in good time to have a quick look around and take a few photographs before kick-off.


Methil lies between the bays of Largo and Wemyss. Methil Docks was the second largest coal port in the UK, such was its importance in transferring coal during the Second World War, that it became a target for German bombers. In 1942 there was a failed attempt to attack the port from Norway, with a bomb falling out of the target area at the Wellsley Coal Pit. This the only time Fife was attacked during the conflict. 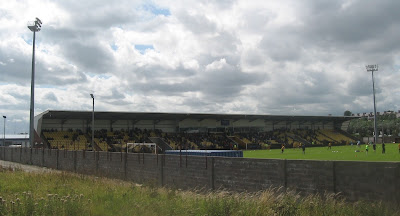 East Fife founded in January 1903 and played in various leagues in their formative years, namely the Fife League, Eastern League, Northern League, before joining the Central League in 1909. The Fifers remained in the Central League until its league members reformed to become part of the Scottish Second Division at the start of the 1921-22 season.

The club’s only season in the top flight before World War II was in the 1930-31, however the club appeared in two Scottish Cup finals either side of this, losing the 1927 final to Celtic and lifting the trophy in 1938 with a 4-2 replay win over Kilmarnock in front of a crowd of nearly 92,000. The first time a club from the Second Division had won this prestigious trophy.

The club won promotion in 1948 and during this period consistently finished in the upper echelons of the table, but their major success was in the Scottish League Cup becoming the first club the win this honour three times in 1947–48, 1949–50, and 1953–54. The club made a third Scottish Cup final appearance, losing out to Rangers in the 1950, but ended the decade out of the top division only reappearing in the top tier for three seasons in the early 1970s. The only honour added in recent times was winning the Third Division in the 2006-07, their first piece of silverware in over half a century. 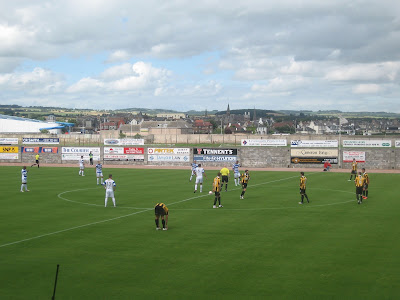 The Fifers played at the original Bayview from their formation, moving after 95 years to a new stadium in November 1998. The stadium still had a view of the bay so it was naturally named New Bayview, built in the shadow of the Methil Power Station, which has since been demolished in 2011.


The ground has just one open stand, which runs pitch length with a capacity of 2,000 yellow seats with boxes for stadium control, press and hospitality found centrally at the back of the stand. The other three sides are made up of a perimeter wall with views across to Leven, where once stood the old power station and to the right of the stand there’s Largo Bay and the choppy waters of the Firth o’ Forth. The new ground was officially renamed Bayview Stadium in 2007 with the record attendance being 1,980 against Raith Rovers in November 2008. 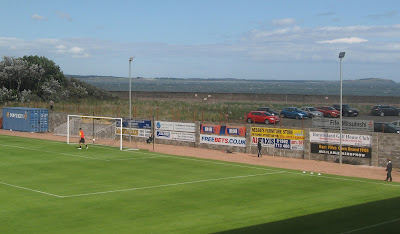 The Scottish League Cup tie with Greenock Morton was my first competitive game of the season. The opening half remained goalless, but both keepers were tested with Buchanan looking lively for the hosts and Campbell should have done better to give Morton the lead with the best effort of the first period.
The deadlock was broken on 53 minutes when a right wing corner was bundled home by McLaughlin from close range, then when a free kick from the left was nodded into the path of Habai to rifle home with twenty minutes remaining, the match looked done and dusted and as I said to James..  “There’s nee chance of extra time” as Morton looked to have booked their place in round two.
The match turned on its head as Fifers manager made some astute tactical changes and substitutions which produced a brace from danger man Buchanan, notching with a right foot drive from the edge of the box and with seconds remaining nodding home past the despairing ‘keeper which drove the Bayview crowd into raptures.

As I had a train to catch in Edinburgh, I didn’t want the game to go all the way to penalties, so after informing Morton boss of this via a telepathic message, he passed this info onto his players who responded in spades. After only two minutes of the additional thirty, McNeil ran on to a through ball to calmly pass the ball into the ‘keeper’s left hand post. The long ball worked a treat again, as Campbell stood on the half way line and latched onto the ball over the top before running in on goal to score five minutes later.
The tie was over as a contest just before the end of the first quarter after a handball from Craig Johnstone saw the defender shown a straight red. The resulted spot kick from Campbell was well saved by Andrews but Dougie Imrie was on hand to score number five from the rebound. I imagine East Fife wouldn't wanted to play the second period of extra time, but they battled on and the goal tally was rounded off to a half dozen in the last minute, with Campbell grabbing his second goal in what was an entertaining 2 hours of football.

This trip was a matchday rarity, with no bevvy, pubs or ‘Spoon visits just a brief encounter into the Kingdom of Fife. I left Newcastle just before noon and travelled back on the 1830, raiding the fridge for a bottle of ale on my return home at 8.20. This was a great start to my summer annual leave, no work for a fortnight and hopefully a couple of Spanish venues to visit over the next fortnight. 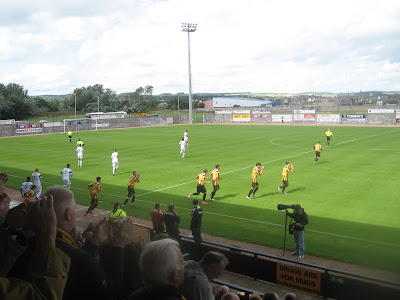 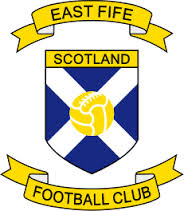