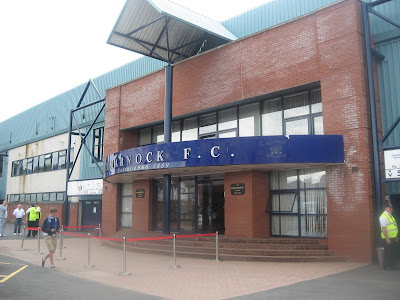 Probably for the only time this season, a chance to see Newcastle United on an unvisited ground as the club sent a development team up to Rugby Park to face a Kilmarnock XI. Also after the exploits in Europe last season, this is the closest I’ll get to see the club play in another country for quite a while, as I continue to slowly work my way through the Scottish 42.

Kilmarnock is a large burgh in East Ayrshire, being the second biggest town in Ayrshire and the 14th largest populated in Scotland. The name Kilmarnock comes from the Gaelic cill (cell) - and the name of Saint Marnoch or Mernoc who is said to have founded a church there in the 7th century. The town is renowned for its publications of Robert Burns’ first book, the very rare ‘The Kilmarnock Edition’ and the Johnnie Walker whiskey distillery, situated in Killie since the 19th century. John Walker was a local grocer, who had his own offy on the High Street in Kilmarnock. Although he was teetotal, Walker went on to produce his own whisky brand - Walker’s Kilmarnock Whisky. When his son Alexander took over the business he went on to create Old Highland Whisky which was later renamed Johnnie Walker Black Label - the spirit which made the Johnnie Walker brand world famous. 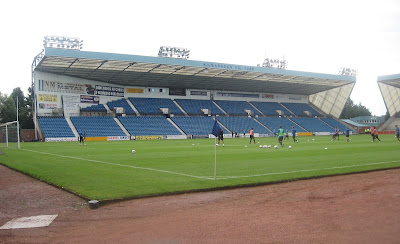 The football club's foundation dates back to that same old chestnut of local cricketers looking to keep themselves occupied in a sporting capacity during the long winter months. During this time football was in its infancy in Scotland, playing a game similar to rugby, hence the connection to the oval shaped game giving the club its eventual ground name. The cricket club formed to play the associated rules of football on the 5th January 1869 during a general meeting at Robertson's Temperance Hotel on Portland Street.
Kilmarnock joined the Scottish League in 1885, twice becoming the Second Division champions to gain election to the top flight. They had originally made their competitive bow in the Scottish Cup in 1873, a trophy they went onto lift in 1920 against Albion Rovers and a second success in 1929, beating the mighty Rangers 2-0 in front of a 114,708 Hampden crowd.

The club's greatest achievement came in the year of this author’s birth when under the management of Willie Waddell, the club were Scottish champions for the first and only time in 1965. Since then they’ve won a third Scottish Cup in 1997 and more recently the Scottish League Cup in 2012. 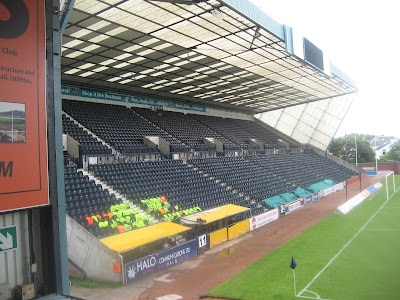 Kilmarnock played matches at The Grange, Holm Quarry and Ward's Park before the club moved to Rugby Park in 1877, a ground situated on South Hamilton Street which was shared by the local cricket and rugby teams. Kilmarnock moved a hundred yards to the present Rugby Park in 1899, kicking off in August with a 2-2 draw with the then-reigning champions Celtic. The club’s very first game in the top division was watched by a crowd of 11,000.
The ground was originally constructed with a running track, a pavilion and a barrel-roofed main stand along the west side. In 1935 a covered structure, later known as the Johnny Walker Stand (because of its roof advert) was added to part of the south terrace which brought the capacity up to 35,000.
Floodlights first came to light in 1953, before a roof was added to the east enclosure in 1959 and the opposite stand was renovated during the 1960–61 season. It was during this era that Rugby Park witnessed a record gate, as 35,995 fans saw Kilmarnock lose 4–2 to Rangers in the Scottish Cup in March 1962.

After the Taylor Report in 1990 the club’s trio of new directors discussed the possibility of relocation to a new 20,000 stadium elsewhere, but after three years of pursuing this possibility, the board decided to redevelop Rugby Park by replacing the three sides of terrace with seated stands, plus replacing the banking and surrounding track.
The new Rugby Park was rebuilt during the 1994–95 season, the capacity significantly reduced as the construction of three new stands gave the stadium a capacity of 18,128 on completion.
The Moffat Stand and the Chadwick Stand (away end) behind the goals are identical, split into two sections of dark blue seats with an electric scoreboard on the facia. The East Stand is fitted with light blue seats with the cream back walls filled with advertising boards. The four floodlights look to be encroaching from the rooftop and peeping into the stadium. Because of residential reasons the stand doesn’t run pitch length, running about 15 yards short at each side and the structure is nicely finished off with Kilmarnock 1869 on the façade.

For this game the only survivor from the old era was opened; the Main Stand on the west side of the ground, which also has a quartet of floodlights on the roof, which are more prominent in appearance. The stand is smaller than the rest with the blue seats split into three small sections. The team dugouts are on this side, changing rooms and the Sports Bar (opened 2004) towards the south side of the stand. The toilets and refreshment bars are tucked under the stand and I especially liked the memorabilia and programmes on display as I bought my Killie Pie and half-time cuppa. 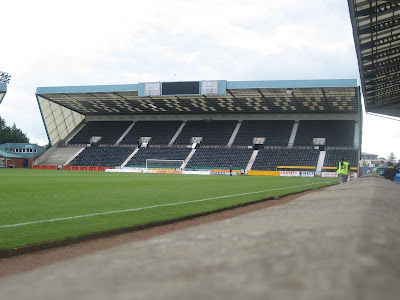 I left Newcastle on the 0926 Northern Rail rattler to Carlisle, then after a brief breakfast stop caught the First ScotRail service to Glasgow Central via Dumfries service, arriving at my destination at 1pm  Before match time I had a few drinks in the GBG listed Wheatsheaf Inn (another ‘Spoons) and the Brass & Granite, although the sign outside read ‘Bas & Gr’. When I travel away for games I'm always well organised, equipped with a printed map; plotting the pubs to visit and obviously directions to the ground. As far as this brand new season is concerned I'm just not in the groove yet, no thorough preparation made and just relying on Google Maps on my phone to get me through the afternoon. So as sods law would have it, I couldn't get a GPS signal or an internet connection, having to rely on a town centre info board map to find the B*a*s & Cr***** and Rugby Park.

Kilmarnock Rugby Football Club was clearly marked on the town map so I headed off in that direction, until it dawned on me that no floodlights had yet to come into view, plus I had an inkling that I was going the wrong way. I approached a lad and asked if I was heading on the right track and he told me it was in the opposite direction, but he would show me to way. As it turned out this canny lad was a Killie fan and he told me he’s one of many supporters to give up his season ticket until the removal of the current regime, only supporting the club away from home, with a trip to Aberdeen next week his first match of the season. I told him that I understood, as I too gave up my season ticket which I held for donkeys’ years, because of my own club’s inept and pathetic hierarchy. (I was heading towards a rugby ground by the way) 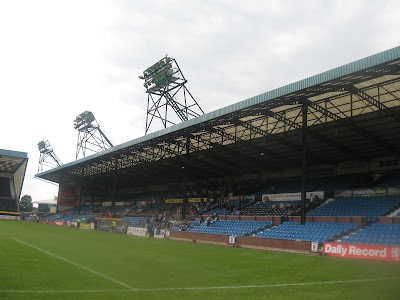 Rugby Park hosted its first game of the season the previous evening in a 2-2 draw with Carlisle United, so for their second fixture in the space of 24 hours a Kilmarnock U-20 team hosted the Newcastle U-21 side. The match itself definitely won’t rank as the greatest I’ll see this season as the game looked to be heading for a 0-0, as far as quality is concerned, a potential goalless draw in a pre-season friendly sums up how poor it was. Kilmarnock were the brighter side throughout and carved out the better chances, their efforts finally rewarded with 20 minutes remaining when Craig Slater capitalised on misplaced back pass to poke the ball home from close range, then in the final minutes Stewart ran on to a through ball and calmly lobbed to ball over Alnwick to seal the win.

Peter Beardsley’s young side looked out of sorts, with too many passes going astray and attacking play easily snuffed out by the young Kilmarnock side. The U-21 team aren't playing in the image of their manager, as one of the greatest players to wear the black and white shirt, more like the mirror image of the great man – not too pretty in the looks department! 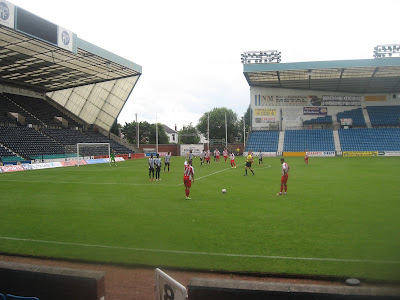 The return home was a long slog. I usually like to get back as quick as possible but I had to wait until 6.25pm to catch the train to Carlisle, where I then had an hour and a quarter to kill before catching the last train home. The 2126 to Newcastle is the train journey I hate the most, the terminated stop being the thirteen along the drunk and disorderly trek through the Tyne Valley. I only spoke to one other Geordie all day, a bloke who seemed lost and pissed up outside the ground asked me how to get to the turnstiles. I saw him again at all three train stations on the route home. It seems like we were the only two to make this trip as everyone else wearing Newcastle colours had Scottish accents, although the NUFC first time play at Blackpool today, so I imagine the Toon Army have invaded the north-west holiday capital instead of seeing the stiffs north of the border. I finally arrived back home at Gallowgate View at 1130 totally cattle-trucked but it was well worth the effort in achieving my 28th Scottish League tick and my 121st ground watching NUFC, at the splendid arena of Rugby Park. 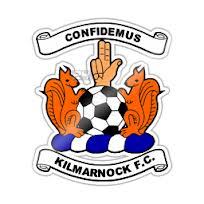 Dedication is not the word