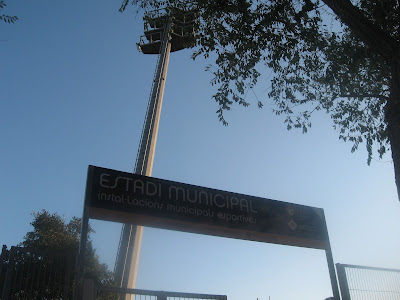 After a disappointing evening with the family in Torredembarra I decided on a solo trip for the second game of my holidays, with a game in Reus. I originally planned to travel by train, but it became apparent that it was easier to travel on the bus, as there’s a good regular service which departs from Cambrils and stops along the coast at Salou, Cap Salou and La Pineda before heading non-stop into Reus. The bus journey from Salou only took half an hour and was very cheap costing 2.90 euros to get there and 2.70 to return. 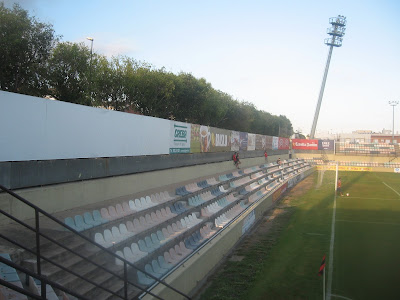 Reus is the capital of the of Baix Camp district in the Catalonia province of Tarragona. The area is renowned for producing wines and spirits, gaining major international importance at the time of the Phylloxera plague.
There are several theories to the origin of the Reus name. It’s believed to come
from the Latin word to describe convict prisoners (reus) so it could have originally been a Roman penitentiary, although the most likely theory is that the name has Celtic roots; reddis - which loosely translates as an inhabited place in a cross-road.

Club Deportiu Reus was founded on 23rd November 1909, out of the former Reus Sport Club playing football only. In September 1917 the club amalgamated with CF Reus Club Velocipedista and SC Olympia, becoming a sports club and renamed as Reus Deportiu .
They became members of the Catalan Football Federation in 1918 becoming second division champions in 1923-24, until the outbreak of the Spanish Civil War halted their progress.
Reus developed as a sports club from the 1950s and moved to their present stadium in October 1977. In 1981 they reached the highest rank in the Spanish pyramid when they won the Third Division, playing in the Segunda B for two seasons. The club achieved a second 3rd Division title in 2006-07 and are currently back playing in the third tier in Segunda division B - Group 3. 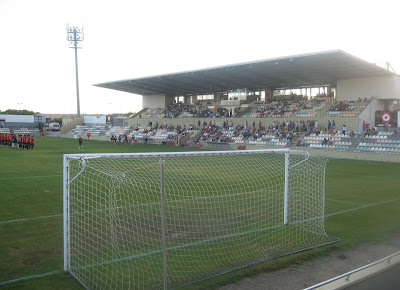 Before I headed out to Spain I printed out a map of Reus, showing the rail station and the stadium, but having changed my travel plan I arrived in Reus to find the bus depot miles from the ground, meaning my pre-prepared map was totally useless. There was a notice board map next to the bus stop and I managed to piece it together and work out a direct route to L’Estadi. It turned out to be a canny hike, taking a good 35 minutes and that was in postman walking mode(The ultimate rapid walking speed...Eddy)

I finally arrived at the 4,500 capacity ground and was pleasantly surprised to find a really attractive stadium, much better than I expected. There’s a sparkling fully covered main stand which is divided into two tiers. Access to the top section is at the back of the stand, which also has window boxes at the rear housing a TV gantry and press box. The stand is divided by a gangway with the bottom section of seats running pitch length. There are four rows of seating behind each goal and at the far side there’s an open second tier which has an extra five rows each side of the electric scoreboard. What makes this ground so pleasing on the eye is the mixture of seats, randomly picked out in cream, pale pink, yellow, turquoise and dark blue. Plus there’s some cracking floodlights which lean into the stadium, appearing as if they’re about to fall over, like myself on a Saturday night after ten pints! 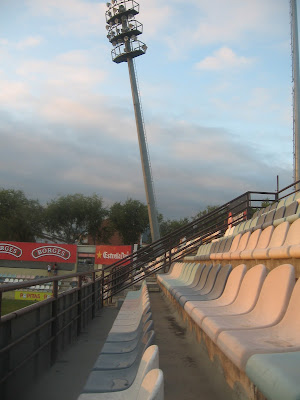 The pre-season game with FC Santboià was the presentation match, when each player within the whole squad is introduced to the supporters to welcome in the new season.
Initially the plan was to play against Lleida Sport, but with both teams being drawn in the same divisional group, Santboià were called upon as a late replacement.
The club gave free admission for the game and the red and blacks supporters were treated to a fine performance by their team with a handsome four goal victory.
The hosts opened the scoring after only 6 minutes when David Agudo ran onto a through ball then produced a delicate chip over the keeper from the edge of the box.
The lead was doubled early in the second half with a powerful header from Xavi Marquis, and he added his second from the penalty spot after a foul on Masque on 77 minutes. The victory was sealed with Alex Lopez getting on the score sheet in the final minute. 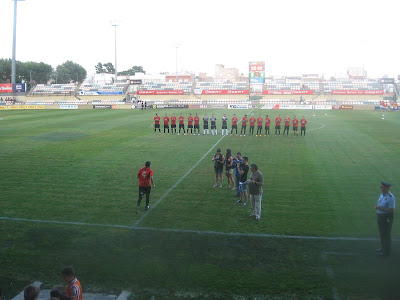 After the game I ran back to the depot for the last bus. When I got back to Salou the resort was busy with the British pubs choca-block, with everyone leaving the comfort of their all-inclusive hotels to watch a bit of football on the TV. Apparently an international fixture had taking place tonight between two British nations, but this didn’t appeal to me in the least as I would have hated to have missed out on visiting this bonny little stadium. 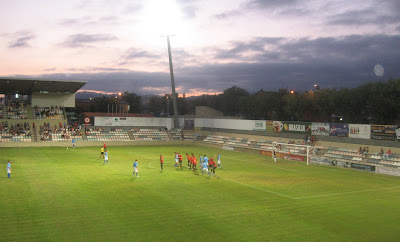 I'm a Reus Deportiu supporter and I've just read your article. I have found it amazing and i would like to congratulate you for this article. This year, we are doing a very good season and we have options to finish the season in 7 place, that would mean to play "La copa del Rey" and if you win 2 or 3 matches you could play against Barça Madrid or teams like that! Amazing!
I am also a member of a group of supporters called RedBlacks. Can you follow us on twitter and In Facebook? Thank you, for write this article and sorry for my english...I'm catalan...

That's great news. Good luck to the RedBlacks and hope you finish the season strongly.