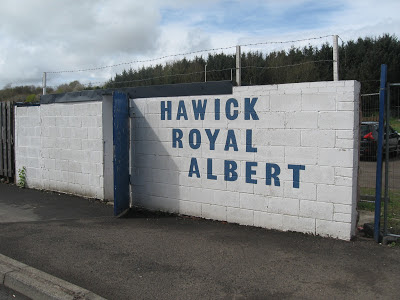 It was on this corresponding Saturday last season that I last took a leisurely drive over the border for an East of Scotland fixture. Last year my destination was Selkirk and today I headed over to Hawick (pronounced Hoy’k) in Teviotdale. The Scottish Border town is in the historical county of Roxburghshire, which is is one of the furthest settlements from the sea in Scotland, found at the confluence of the Slitrig Water with the River Teviot.

Hawick has distinctive architecture, with many sandstone buildings having slate roofs. The Common Riding is an annual event celebrated in Hawick, which commemorate past times when local men risked their lives to protect their town and people. The town is historically renowned for its knitwear industry, with the first knitting machine brought to Hawick in 1771 by John Hardie.
Hawick folk are known as "Teries", after a traditional song which includes the line "Teribus ye teri odin" which is believed to have been the war cry of the men of Hawick at the Battle of Flodden Field. 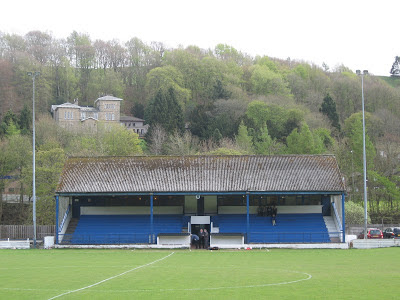 Hawick Royal Albert formed in 1947 by Harry Weir and William Bunton, originating out of Hawick Railway FC. The “Royal Albert” name derives from Larkhall Royal Albert, the hometown club of Bunton, a club founded in 1878 by a mine-owner who also owned a ship called “Royal Albert”.
Hawick won their first silverware as Border Amateur League Championship in 1947–48 and have won the East of Scotland Premier Division on three occasions in 1966-67, 1967-68 and 1973-74.The Royalists have also won the Kings Cup three times, the last time back in 1984, but over recent years they’ve been frequent strugglers at the foot of the EoS First Division.

The club’s original home was at Wilton Lodge Park, before moving to Albert Park in 1963, officially opening with a friendly against Hibernian. Shortly after their relocation, The Royalists became full members of the Scottish Football Association which offers automatic entry to the Scottish Cup. The club also applied to join the Scottish Football League in 1966 and 1975, losing out to Clydebank and Ferranti Thistle respectively. 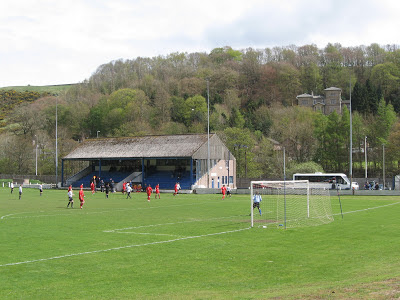 Down in the south, the one time showpiece of English football was taking place at Wembley and up here in the Borders was another final of sorts. To make Hawick’s end of season fixture with Burntisland Shipyard sound a bit more interesting I’ve giving it the handle of the ‘East of Scotland Wooden Spoon final’.
Going into this game The Royalists sat at the bottom of the table with 2 wins and 3 draws from their 23 fixtures with their opponents just above them, having gained one extra victory this season.
The match was played in bright sunshine but with gusty condition. At times the quality on show was poor, but overall the match was played in good spirit with both teams committed to avoid finishing bottom of the pile.
The Shipyard took the lead on 19 minutes when Gavin Bridges broke from midfield and stayed onside from Brendan Napier’s through ball. He showed great poise to calmly go around the ‘keeper and slot the ball into an empty net.
Just before half time the hosts were level. A corner kick from the right fell into the path of Peter Keenan, who with his back to goal managed to half turn and fire the ball into the roof of the net from close range.
In the second half the game was finely poised and could have gone either way, and with just minutes remaining it looked like we had a winner when Hawick were awarded a penalty. Declan Hogg picked up the ball in midfield and his positive run towards goal was halted with a trip in the penalty area. Keenan took the spot kick and his effort produced a fine save from Mikey Couser, to deny me seeing a rare Hawick win and save his team from taking the ignominy of the unwanted wooden spoon. 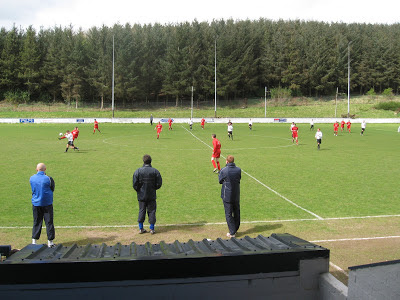 On the subject of spoons, me and my son James arrived in Hawick at 1.15pm and found the town a very tranquil place with too few people around. We then entered the local JDW ‘Spoons ‘The Bourtree’ and it was chocka, as if everyone out and about were sat in this pub. We had a splendid day out and really enjoyed Albert Park and would recommend it as one to visit, especially that splendid clubhouse at the top of the stand. I’m not a big fan of driving to matches (That’s because he likes a Bevvy…Eddy) but I do like that run up the A68 towards the Keilder Forest and the Carters Bar crossing, which has fantastic views of both sides of the border. I look forward to ticking off more EoS clubs in this vicinity and hopefully it won’t be a full calendar year before my return. 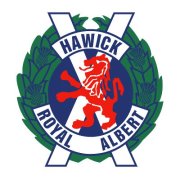 on May 12, 2013
Email ThisBlogThis!Share to TwitterShare to FacebookShare to Pinterest
Labels: Burntisland Shipyard, Hawick Royal Albert