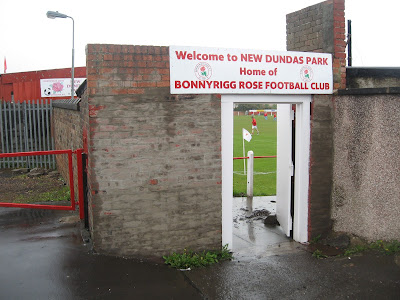 For my 100th match and my last trip of the season, I kept the tradition of my final new ground being a Scottish tick. The Junior fixtures are a closely guarded secret with details released on a weekly basis, so it wasn’t until last weekend that I could select which match to attend. After weighing up the options and consulting with Edinburgh based Squad #155 James Little, we decided to plump for Bonnyrigg Rose v Hill of Beath Hawthorn in the Fife and Lothians Cup.

Bonnyrigg is a town in Midlothian, found eight miles south-east of Edinburgh city centre. The town has been known as Bonnyrigg since the 1850s, but early maps show different spellings. In 1766 a village called "Bannockrigg" is shown in the locality, then the spelling changes to "Bannocrig" in 1815 which remained for almost 40 years, then for reasons unknown it changed again to the now familiar Bonnyrigg.
The town merged with the fellow burgh of Lasswade in 1929, becoming Bonnyrigg & Lasswade until the burgh was abolished in 1974. Bonnyrigg was a mining village until the 1920s, while its main industry was carpet making until the factory closed in 1978 after over 100 years in the business. 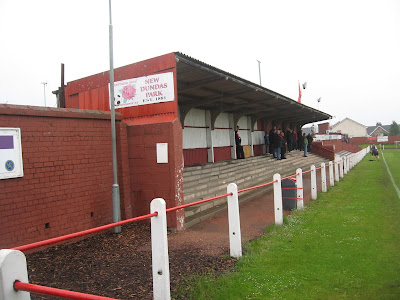 Bonnyrigg Rose Athletic F.C. was founded in 1881 from Bonnyrigg Swifts who trace their origins back to 1874. The Rose have a long proud history of winning honours within the Junior ranks, mostly notably winning the Scottish Junior Cup on two occasions in 1966 and 1978, including a joint record winning margin of 6–1 when they defeated Whitburn in the ‘66 final.
The club won their first league title in the Edinburgh & District League in 1937–38 and again in 1963–64, before going onto win the East Region Division One in 1975–76, 1976–77 and 1984–85. They currently play in the SJFA East Region Super League and are the current holders, winning their second league championship following on for their initial success in 2008-09.
The Rose have also added a stack of cup honours, winning their first piece of silverware in the East of Scotland Junior Cup in 1898, which they've achieved a further five times, the last of which in 2006. The club have also won the Brown Cup (8 times) East Junior League Cup (5 times) and the Dalmeny Cup in 1923.

Bonnyrigg Rose had a world famous star amongst their former players, a 6’ 2” right winger who wore the red and white hooped shirt at the beginning of the 1950s. The former number 7 was apparently good enough to earn a trial with East Fife and actually knocked back an offer from Sir Matt Busby at Man United to concentrate on acting, so "who ish thish famouish shtar?" – his name is Connery, Sean Connery.
Full detailed article can be read here; http://www.scottishfa.co.uk/sjfa/scottish_football.cfm?page=1711 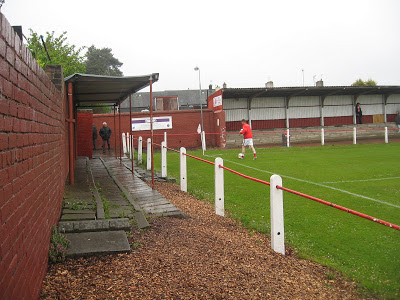 New Dundas Park was originally purchased by the Trustees of Bonnyrigg Rose Athletic F.C. from Sir Hendry Dundas and his mother Dame Jean Hood for £500 on the 10th June 1953. The main features are all found at the ground entrance side. The popular standing area has nine terrace steps fully covered running half pitch length, with a smaller open terrace in the centre facing the dugouts opposite. Behind the central terrace are four cabins; a hospitality room, refreshment bar, referees room/toilet block and a club shop. The changing rooms and a clubhouse for members & seasons tickets holders are to the left of the half-way line. The left side has terrace steps directly behind the goal and on the right hand side is a partial shelter in the corner next to the main admission entrance. The far side has grass banking with three red crash barriers on the steeper side of the dugouts. The ground also has a distinct slope running across the pitch towards the dugout side.
New Dundas Park is a neat little ground which has greatly improved in recent years since the old pavilion was burned down in September 2009, a really nice ground and a smashing club which is well worth a visit. Bonnyrigg were up against Hill of Beath Hawthorn in the quarter-finals of the Fife & Lothians Cup, another prize Rose have added to their honours list, having won the trophy in 1982, 2005 and 2007.
The hosts dominated throughout but as we reached the later stages of the game a penalty shoot-out looked on the cards as Rose continued to waste several gold glinted chances. The deadlock was finally broken in the 70th minute when Sean Grady headed home a lovely left wing cross from Gemmell, then a cracking chest and volley combo from Kris Renton on 82 minutes appeared to have booked a cup semi-final place. However two minutes later the visitors replied, when sub Ross Allum latched onto a loose ball in the box to fire home and put Hawthorn back in the tie. This proved to be a temporary relapse as the impressive Renton added his second, firing a deflected assisted shot from the edge of the box in injury time. The victory was giving added gloss when a clumsy trip on Gemmell in the box saw Paul Currie convert from the penalty-spot, the fifth goal in a hectic last quarter of the match.

I left home at 8am and got a thorough soaking in the torrential rain just walking to the bus stop. When I arrived in Edinburgh I couldn't believe that the downpour was just as bad, so all day I looked like a drowned rat, finally feeling warm and dry on my return home twelve hours later.
On arrival I did my usual route of breakfast on South Bridge and visiting a couple of record shops, my bad mood with the appalling weather was boosted after purchasing some much sought after vinyl at bargain prices.
I arranged to meet James outside Waverley Station at 1245, expecting to be greeted with news that our game was off, but apparently there was only one postponement in the area. It’s common knowledge that as well as collecting football grounds I also like to bag Weatherspoons pubs, so on our way to Bonnyrigg we stopped off in Dalkieth to visit the only ‘Spoons in Midlothian ‘The Blacksmiths Forge’ then after the game we returned to Edinburgh via Musselburgh to tick off the impressive ‘The David Macbeth Moir’ the only JDW in East Lothian.
Although it was a rotten day weather wise I can’t really complain, a new ground, two new ‘Spoons and some new additions to the vinyl vault, so all and all not a bad matchday trip to finish off yet another enjoyable season of groundhopping.