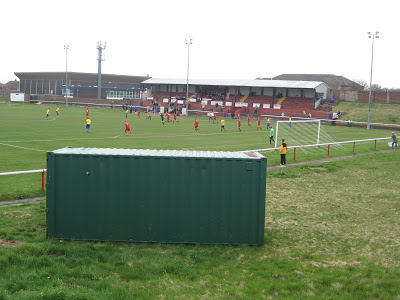 This morning I took the 40 minute bus journey on the X71 from Gateshead Metro to Consett(£6.60 return!!!)to pay a final visit to the Belle Vue ground, which is due to close within the next few weeks.
I arrived in the former steel town at 11am which gave me a good hour before kick-off to tick the local 'Spoons - 'The Company Row' before toddling along Medomsley Road for the game.
The match against Marske United was a typical end of season affair. The visitors took a two goal lead midway through the first half through Adam Wheatley and John Alexander, with the Steelmens grabbing an own goal consolation in injury time.
My main reason for travelling up to Consett, apart from obviously going to Wetherspoons, was to take a full set of pictures, which was something I didn't do on my original blog post - so here are 35 pictures from my final visit to Belle Vue;

My first visit Ground no.111 (v Newcastle United XI 17/7/06)
on May 06, 2013
Email ThisBlogThis!Share to TwitterShare to FacebookShare to Pinterest
Labels: Consett, Marske United