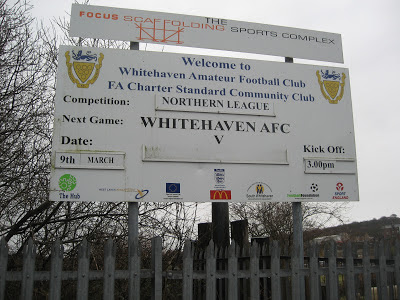 When I began blogging on this site in 2006 my first football ground task was to complete the Northern League set. Over two seasons I bagged the remaining twenty odd needed before eventually completing this mission at Esh Winning in April 2008. The following season Whitehaven Amateurs became the league’s newest members, meaning it’s taking me a mere five years to finally head across to the west coast to re-complete the set.

Thanks to a friend of a friend, my mate Jimmy Jimmy got me some £5 Friends & Family Northern Rail tickets, so I could travel all the way from Newcastle to Whitehaven and back for approximately the same price of a pint of shandy on the Diamond Strip* in Newcastle.
I caught the 0926 service to Carlisle, when on arrival I hotfooted through the heavy rain and straight to the Market Hall, which probably serves the best cooked breakfast in the whole of Cumbria. Because of the downpour I tried to find out whether the match was on, but after ringing the Northern League postponed line, Whitehaven AFC and checking the clubs twitter feed I was none the wiser, but still gambled by boarding the 1139 for my onward journey. Just as the train pulled away from the platform I received a twitter text replying to my tweet for help from @knockernorton1 and @whitehavenafc telling me it was match on.
Whitehaven is a small town and port on the coast of Cumbria, situated between the county's two largest settlements of Carlisle and Barrow-in-Furness. The town is the administrative centre of the Borough of Copeland, located on the west coast just outside the Lake District National Park.
The area name of Copeland was settled by Irish-Norse Vikings in the tenth century. The Copeland name also includes indicates that the land was obtained from the Kingdom of Strathclyde. The Lowther family were principal pioneers of the town in 1630. Sir Christopher Lowther purchased the estate, using Whitehaven as a port to export coal from the Cumberland Coalfields to Ireland, before building a stone pier for cargo ships four years later. Whitehaven grew into a major mining town during the 18th and 19th centuries and became an important commercial coal port.

Whitehaven Amateurs formed from the disbanded Marchon AFC works side, joining the old Wearside League Division Two in 1994. The club won the title the following term as the league became a single division and by the mid-noughties were the best side in the league, winning the title in 2005-06 as well as appearing in various cup finals, one of which was an astounding victory in the Monkwearmouth Charity Cup, which I attended at Teesside Athletic in 2007.
Although the club finished 3rd in the 2007-08 season, their application to step up to the Northern League was successful,  finishing 11th followed by two seventh place finishes, then 13th in Division Two last season. The club also lifted their first piece of Northern League silverware in the Ernest Armstrong Memorial Trophy in 2010. A new £6 million sports ground for the club has been in pipeline for some time. The 8,000 capacity stadium would be shared with their Rugby League neighbours as part of the redevelopment of both grounds. The sports village would be the centrepiece of the £20 million Pow Beck regeneration by Copeland Council and West Lakes Renaissance. The original plan was for the football club to ground share with the rugby club at The Recreation Ground with the current football ground the site for the new stadium, with The Rec then being used for training and parking. At the moment the proposed scheme has come to a grinding halt and it’s believed the investors and both clubs are looking at possible alternatives to the plan, which has faced delays over problems securing access to the Pow Beck site.

I arrived at 1250pm, calling into the JDW Bransty Arch which is across the road from the station, then after a few quality pints I took a stroll through the town centre towards the ground. The Focus Scaffold Sports Complex is in the southern end of Whitehaven off Coach Lane next to Corkickle station. Once you locate the welcome sign there’s still a longish walk along a footpath to the ground, where at the end is a young lad ready to take your £4, as there isn't a proper designated admission entrance.
The ground had two separate meccanno type stands with yellow and blue flip seats, sitting each side of the halfway line behind the dugouts. One of the stands has a small standing section and behind this side is the rugby club’s Recreation Ground which you can look directly into from the football ground.
The clubhouse (where I had time for another bevvy and read of the programme before kick-off) and changing rooms are at the top end of the ground beside the main car park. The other three sides are open with hard standing and there are two floodlight poles at each side. 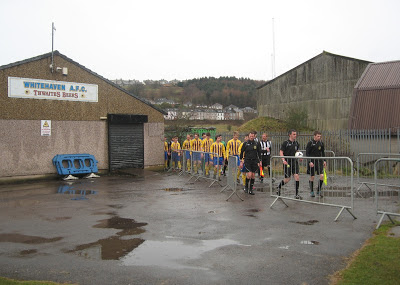 It wasn't just me who was appearing here for the first time, it was also Whitehaven Amateurs opponents Tow Law Town's debut having been relegated to Division Two last season. If  The Lawyers live to play a hundred more fixtures in Whitehaven they’ll never make a worse start to a game than this, going a goal behind after only 33 seconds, when Hodgson ran onto a through ball down the left side before dinking the ball over the keeper, to give the home team a dream start.

Both teams then took it in turns to give away clumsy penalties. Ryder equalising on 15 minutes before Sam Smith also succeeded from the spot to regain the advantage twenty minutes later. Just before half time Tow Law were reduced to ten men after a wild challenge from the big centre half saw a straight red. This gave the hosts a big advantage going into the second half and they extended their lead when a shot from Hodgson produced a great save from Robinson, however the number 9 was quick off the mark to net the rebound.
Sam Smith was on hand to make it 4-1 after capitalising on a loose ball to slot home before a cracking goal from substitute Harrison gave Town a glimmer of hope, but it turned out to be too little too late as sub David Dustin made it 5-2 with five minutes remaining.

After the match I ran around to Corkickle station to catch the 1651 back to Carlisle. I had time for a pint in the William Rufus before heading back east along the Tyne Valley. It was good to finally get across to Whitehaven and re-complete the second oldest league in the world in this its 125th year and overall it was a canny day out in Cumbria, not bad for a fiver! 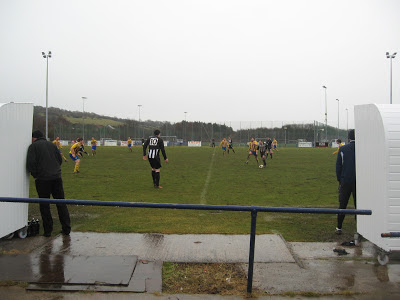 Did they not run out to "The (Derek) Birdy Song?"