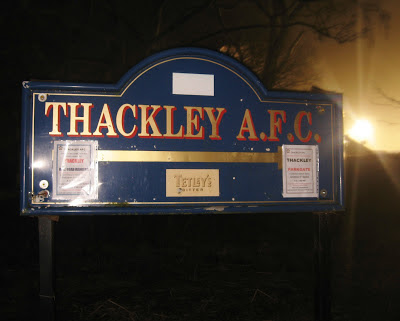 I took this specific week’s leave from work, in the hope of having another escapade on foreign shores, courtesy of Newcastle United’s progress in the Europa League. Even though we advanced into the last 16 of the tournament, our next round opponents weren’t the club I asked for, as Hannover 96 lost out to Anzhi Makhachkala, meaning a £619 round trip to Moscow (including visa) instead of a cheap excursion to Germany. To make up for missing out on a new ground this week I decided I would drive down to the closest uncharted club who had a Tuesday night fixture, and the lucky winner of having the honour of my presence was Thackley AFC, their Dennyfield ground being 93.4 miles door-to-door from 100FgC HQ. 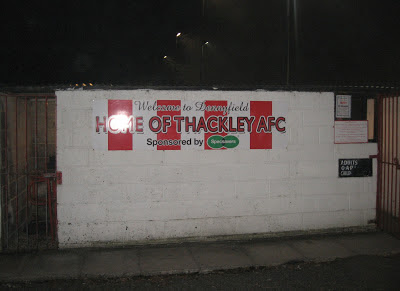 Real Madrid manager Jose Mourinho declared that tonight the world would STOP to watch the big Champions League clash with Man Yoo and that’s just what I did. I jumped in the car and drove down the A1 and STOPPED once I arrived in a small West Yorkshire village to watch some proper football.

Thackley is a small suburban area south of the River Aire in the northernmost part of Bradford, which borders the village of Idle, the West Royd area of Shipley and the Leeds and Liverpool Canal. The canal was built through the top end of Thackley in the 1770s and historically the area formed part of the Lordship of Idle. In the 17th century a tanning industry developed and in the 19th century sandstone was quarried, with mills built for a local cotton industry. Recent development on Weavers Croft occupies part of the location of the former Bowling Green Mills. 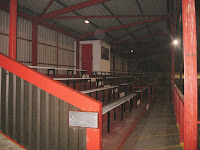 Thackley Wesleyians formed in 1930, plying their trade in local football before joining the West Riding County Amateur League in 1939, when they also dropped the suffix from their name. The club progressed to the West Riding County Amateur League and over a quarter of a century won the league title five times, before a brief spell in the West Yorkshire League. Thackley joined the Yorkshire League in 1967 before becoming founder members of the Northern Counties East League's Premier Division in 1982.Since then the club have stayed in the same division without being relegated or promoted, with their best season coming in 1993–94 when they finished second with 74 points to Stocksbridge Park Steels, who amassed the same points tally but were champions on goal difference. The Dennyboys have enjoyed success in the West Riding County Cup, lifting the trophy on four occasions during the 1960s and ‘70s. 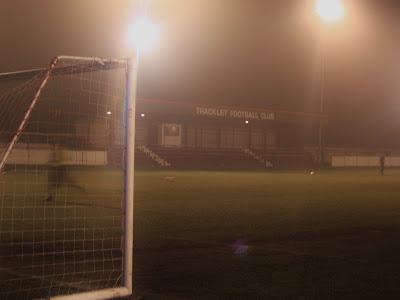 Dennyfield is found on Ainesbury Avenue which is along a long dark lane which reminds me of the approach to Esh Winning. The entrance brings you straight into the car park where there’s the clubhouse and turnstile entrance.  Once I arrived in the outskirts of Thackley I was greeted with fog which wasn't too heavy and without pending danger of the game being in doubt.

After parking up I bought a programme from the turnstile which was priced as a quid but was giving free because it was a smaller issue due to printing problems. I then checked out the clubhouse before deciding to move the car after a couple of stray balls just narrowly missed bouncing off my bonnet, as the players did their pre-match warm up.

You enter the turnstile at the corner of the ground behind the goal. After parting with a five spot I asked the bloke on the turnstile about pin badges and he said they've got some and he’ll get them for me. I attempted to take some pictures but due to the combination of fog and bright lights from the eight floodlight pylons I failed to capture any decent images. As I was taking the photos the club official caught up with me with the pin badges, offering me the latest badge for £3 or a boxed limited edition of the 1964 crest for £5, or both for a fiver! So logically I bought both, so a good start to the evening, having bagged a free programme and badge.

The main stand sits central to the pitch, having 4 rows of bench seats painted white on red concrete blocks. The stand also has a small PA box and is fully covered with the club name proudly displayed on its façade. The changing rooms and refreshment bar are also on this side and opposite are the dugouts in front of three steps of built up terracing. There is also a similar standing area directly behind the far goal and the nearside goal has pathway standing.
Dennyfield is a tidy little ground and looks lovingly maintained. The overall capacity is 3,000 with the biggest gate recorded when the ground was half full for a friendly with Leeds United in 1983.
The Thackley home kit is akin to Arsenal’s while their opponents tonight Hall Road Rangers, wear the QPR style blue and white hoops so the players had a look of two clubs from London not east and west Yorkshire. The first half was quite an open affair with the lively Thackley number 10 having a similar stature and running style of Theo Walcott, although my vision may have been wavered by the fog.

Hall Road Rangers are anchored at the bottom of the NCEL Premier League with five wins from a possible 31 fixtures, while the host sat in 9th spot, hoping for a strong run in towards the season’s end. I was expecting a comfortable win for the Dennyboys but it was the basement club who held off the early pressure and took a two goal lead before half time.
The breakthrough came in the 35th minute when Darren Rookes pinched the ball off the defender on the left and with a quick turn of pace ran towards goal and then from a tight angle managed to squeeze his left foot shot in at the far post. I thought the goal scorer looked like a young Alan Biley (one for the older readers…Eddy) but as I've said it was foggy and he was playing over on the left wing.
A minute before the break another defensive lapse made it 2-0, when a Titus Bramblesque back pass was seized by Jamie Reeson who poked the ball past the keeper into the right hand corner of the net.
Thackley dominated the possession in the second period but didn't really look like making the breakthrough as Rangers deserved this much needed victory which gives them at least a glimmer of hope of avoiding the drop. 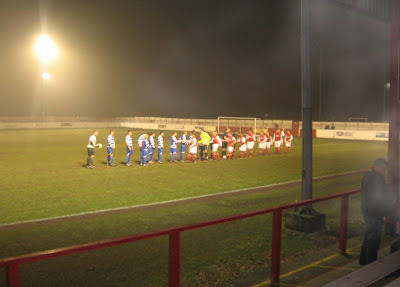 Afterwards I bravely managed to work my way home with a stressful drive through thick fog along the A59 and the Yorkshire part of the A1, eventually pulling up outside Gallowgate View at 1120pm.
Apart from the fog and the disappointment of not being able to get some decent ground photographs I still had a pleasant evening at Thackley. The drive down to Yorkshire was well worth it just to get out of the house for the night, because what’s the point of STOPPING in, when there isn't the attraction of anything good to watch on the tele!