Dartford 3v0 Gateshead
Blue Sq.Bet Premier
23rd March 2013
Dartford is situated in the northwest corner of Kent, 16 miles east south-east of central London and situated in the River Darent valley. The old ford road from London to Dover crossed the river which gives the settlement its name, and the town was established as a river crossing-point in Romans times.
The medieval market town lies within the area known as the London Basin and today is chiefly a commuter town for Greater London, with a long history of religious, industrial and cultural importance. Dartford is also the birthplace of wrinkly rockers Mick Jagger and Keith Richards, who both crawled out from under a stone in this corner of Kent back in 1943.

Dartford Football Club was formed in 1888 by members of the Dartford Working Men's Club and Institute. The club came to prominence in 1894, reaching the final of the Kent Senior Cup, before becoming founder members of the Kent League and participating in the FA Cup for the first time.

Dartford became founder members of the Southern League Division Two in 1896, winning the Championship at the first attempt and moved between the Southern and Kent Leagues several times over the following seasons.
The club originally played at Dartford Brent, before brief spells on a field behind Westgate House and then on a variety of pitches on Lowfield Street. In 1894 they settled at Summers Meadow, but financial problems at the end of the decade saw a brief move to Engley’s Meadow before the club folded in 1900.
A new club Dartford United formed but only lasted one season, however Dartford Rangers who ground shared at Summers Meadow took over the ground and became plain Dartford FC. After the First World War the club reformed in due course in 1921 and purchased five acres of land on Watling Road, becoming their home for the next 70 years.

The Darts settled in the Southern League from 1926, winning the East Section two years running at the turn of the 1930s.The club continued playing within the league structure until winning promotion to the Alliance Premier League in 1981, the first of two brief spells in the non-league top division during the 1980s.
On the eve of the 1988-89 season, the club agreed to Maidstone United ground sharing at Watling Street. The rent from the new tenants was needed to upgrade facilities in the wake of the Bradford fire, plus United had sold their London Road ground and harboured ambitions to reach the Football League.
Maidstone were Conference champions at the end of that season, so Watling Street briefly joined ‘The 92’ before United went bankrupt and had to resign from the league in August 1992. The cash which bankrolled ground improvements were sold on to Dartford at a cost of around half a million pounds, which meant Maidstone had virtually dragged Dartford into the gutter with them, as unmanageable debts meant Watling Street was sold to pay off creditors.
Dartford started the 1992-93 season playing at Welling FC but withdrew from the Southern League after only four games. The club thankfully survived through the Supporters' Association, which set up a private limited liability company in November 1992 and on the field kept the Youth team functional.

The club were offered a ground share at Cray Wanderers and made a successful application to the Kent League for the 1993-94. After three seasons The Darts won promotion to the Southern League and the road back to the Conference saw championship winning sides in the Isthmian North (2007-08) Isthmian Premier (2009-10) and last season they finished runner-up in Conference South before beating Welling United in the play-off final.
The clubs nomadic years included bunking-up with Erith & Belvedere (1994-1998) Purfleet (1998-2000) Gravesend & Northfleet (2000-2006) In April 2004 Dartford Borough Council announced it would provide a site and funding for a new stadium in time for the 2006–07 season. The ground was designed by Alexander Sedgley Architects at a cost of around £7m, with construction work commencing on 14th November 2005. The stadium opened nearly one year later when Dartford beat Horsham YMCA 4-2 in an Isthmian League Division One South league fixture, in front of a crowd just three short of its official capacity of 4,100. 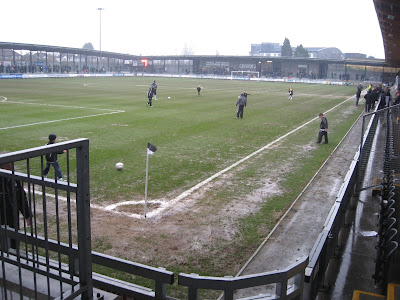 Princes Park and has been described as one of the most ecologically sound and environmentally friendly ever built, which should provide a blueprint for 21st century stadia.

The many green features of the stadium include a sedum roof blanket, which provides a natural air filtration system. There’s solar panels on the roof which generates electricity, with the roof supported by treated Glulam timber. Rain water is collected in the two large ponds at the north end and is recycled, with also excavated earth reused for landscaping the exterior courtyard areas around the stadium. 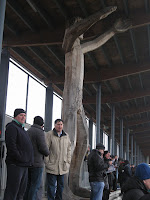 Inside the stadium the pitch is sunk two meters below the external ground level to reduce noise and light pollution. The ground is fully covered with terracing on three sides. The Main Stand is quite shallow having four rows of black flip seats that runs pitch length with a 642 capacity. The dugouts are in front of the stand and directly above the tunnel is a separate seating area for club officials and guests, with the large windows of the two spacious clubhouse rooms at the top. The four stands are equal in height and design with matching sloping roofs which peak centrally. There’s a club shop at one end and the Defluo bar behind the opposite goal, with plenty of disabled space in the corners and also an electric scoreboard.
A unique feature of the ground is the oak man which stands on the side terrace. From the Main Stand is looks as if the large wooden carving is holding the roof up with his hands. I made the comment “He’s a big strong lad” to a few Dartford fans who were watching me photograph his impressive structure. 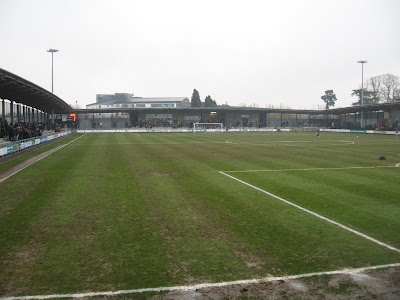 I caught my first glimpse of the heavy snow from the previous 24 hours just after Darlington, with a large white blanket covering the country all the way to London. Due to the weather my train arrived 15 minutes behind schedule at 1010, but I still had enough time to tick off a couple of ‘Spoons in Holborn (Penderel’s Oak and The Knights Templar) and visit record stores off Oxford Street before heading to London Bridge to catch the connection to Dartford.

I originally planned to arrive at 1pm, as I was meeting Squad #108 John Robertson(from Somerset) and #194 Keith Arthur(from York) for a pub crawl, but after reading on Twitter about a 1230 pitch inspection, I waited to see if the match was definitely on before continuing on what could become a fruitless journey.
I tried in vain to contact three different people to find out the latest beef, but their phones were either engaged or switched off, plus I also had a crap 3G connection so was unable to check for twitter updates. I couldn’t hang around much longer so I decided to head for Dartford anyway and hope I would see some football at the end of it. I needn’t have worried as I began to see more green land and snow turned to sleet the closer I got to Kent, so I finally arrived at 1.45pm. I made time for a couple of swift pints in the two Dartford ‘Spoons and eventually caught up with everyone I was supposed to meet earlier, down at the stadium. 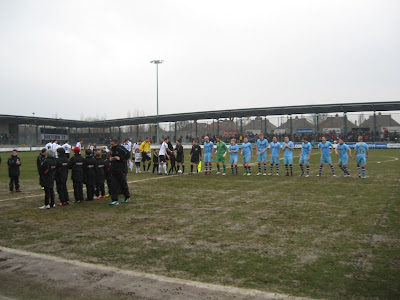 The pitch was a bit heavy in places so the match lacked that bit of quality and looked a certain nil-niler after an uneventful first half.

After the interval Gateshead became more positive, having a lot of possession but lacked that final quality pass to break through The Darts defence. There was an optimistic mood amongst the Heed Army of at least a point in the bag and hopefully three if they could break the deadlock.
Then in the 63rd minute Ryan Hayes replaced Lee Noble which totally changed the game and turned the match on its Heed. Within three minutes he capitalised on a goalmouth scramble to fire home, then in the 72nd minute he picked up the ball on the right before curling a peach of a left foot shot inside the keeper’s right hand post.
Hayes then turned provider for loanee Charlie Sheringham (Teddy’s bairn) who scored a copy-cat goal but from the opposite side of the pitch with a precise right foot effort inside Bartlett’s left hand post.
So after looking as if The Tynesiders would come away with a positive result, it was suddenly game over. Bang! Bang! Bang! – 3 Darts in the Heed!
This victory puts Dartford in the top half of the table, with any remote fears of getting dragged into the relegation scrap now officially over, meaning they can enjoy the remainder of the season and try to gain a respectable league position. On the other hand Gateshead are still involved in the dogfight at the bottom and with all remaining fixture virtually away from home, it will be a massive achievement if they can maintain their Conference status for next season.

on March 24, 2013
Email ThisBlogThis!Share to TwitterShare to FacebookShare to Pinterest
Labels: Dartford, Gateshead

Well done for all your hard work in providing this high quality blog.Thanks for great information you write it very clean.

Better than a match day programme and post match report in the local rag.... what a great idea this is and very well executed

Awesome job on the blog and all the hard work you are putting into this venture. I wish my local football club had a stadium like Princes Park. Keep up the great work...all the best from Victoria, BC, Canada.

How did I make an error like that and how has nobody else mentioned it? Thanks for putting it right.