My Matchday - 338 The Bet Butler Stadium 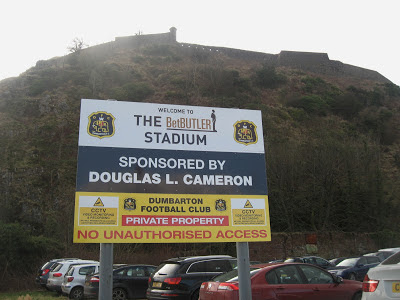 My gradual progress of completing the senior grounds of Scotland continued with a day trip to the West Central Lowlands for the Scottish Division One clash between Dumbarton and Falkirk.

Dumbarton is a town and burgh in West Dunbartonshire and the former capital of the ancient kingdom of Strathclyde, which lies on the north bank of the River Clyde where the River Leven flows into the Clyde estuary. The town was a Royal burgh between 1222 and 1975 and is dominated by its castle which sits on top of Dumbarton Rock.
Dumbarton came to prominence in the 19th century as a centre for shipbuilding, whisky distilleries and glassmaking, but nowadays its seen more as a commuter town, being 13 miles east-southeast of the city of Glasgow 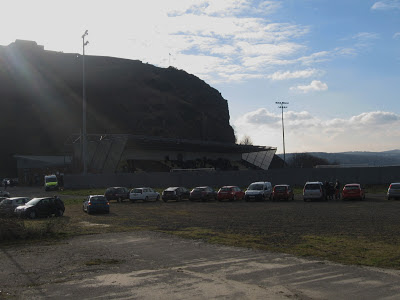 Dumbarton FC formed in 1872 and are the 4th oldest football club in Scotland following Queen's Park (1867) Kilmarnock (1869) and Stranraer (1870). The club are nicknamed 'The Sons' which derived from the phrase for those born in the town - 'Sons of The Rock' and have the historic honour of being the first Scottish champions, winning the league in the competition’s first two seasons from 1890.  Their first piece of silverware came in the Scottish Cup in 1883, beating Vale of Leven 2-1 in the final after a replay and they’ve also been losing finalists on five occasions, all in the late 19th century.

After the Scottish League was split into two divisions the club won the Second Division title twice in 1910-11 and 1971-72, but haven’t played in the top tier since 1985 spending the subsequent years jumping between the three SFL divisions.

Dumbarton played at Boghead Park from 1879 until relocating in 2000, their home for 121 years was the longest continuously used senior ground in Scotland before its closure. The new stadium was built by Barr Construction and originally named the Strathclyde Homes Stadium, before several sponsorship changes to the current rebrand of The Bet Butler Stadium before the start of this season.

The stadium was built on the former site of Denny’s shipyard and is commonly known by supporters as "The Rock" The ground is easy to describe, having just the one stand which has a 2,025 capacity which sits on the river bank overshadowed by Dumbarton Rock. The one tier stand is decked out in black and yellow plastic flip seats with the dugouts and another pair of floodlight pylons on the opposite side. The three unused ends are closed in with a medal fence without any cheeky free viewing gaps in between.
Dumbarton ground shared with Albion Rovers at Cliftonhill before the stadium was officially opened on the 2nd December 2000 prior to a 3-0 win over Elgin City, with the biggest gate so far being 1,959 against Queens Park on the 27th April 2002. 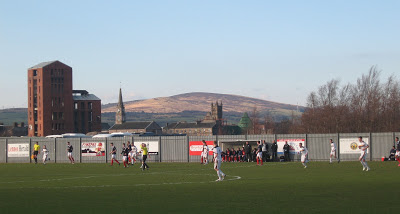 I jumped out of bed at 730am to be greeted to the sight of the cold white stuff after a heavy overnight snowfall, which I wasn’t too bothered about, as according to the weather forecast todays destination was bathing in sunshine and clear blue skies. The journey to Dumbarton is a three train trip via Edinburgh and then Glasgow, where I spent a few hours record store shopping and obviously stopping off for a pint before catching the 1341 west bound train to Dumbarton East.

The stadium is a 5-10 minute stroll around the corner from the rail station, so I had plenty of time to do a lap of the outer perimeter of the ground and try and capture a decent photography of the stand with the rock behind it. After doing a lap I found it was impossible to achieve this snapshot, the best I could muster was risking life and limb by climbing a wall at the far end of the car park and only capturing the rock with the top end of the stand, the bottom blocked off by the fence(see second pic.)

The game matched up “The Sons” against “The Bairns” so this fixture sounded more like a kiddies crèche than a clash between two of the in form teams in the Scottish First Division. Dumbarton have been in a rich vein of form since Christmas winning six out of the last 9, with narrow defeats in their other three fixtures. However there was nothing marginal about this game as the visitors produced a comfortable victory where the game should have been out of sight by half time, as they fluffed a series of excellent chances. The Bairns first half dominance produced two goals, opening with Thomas Grant slotting home after a through ball by Taylor found Alston who picked out his team mate with a neat cross on 25 minutes. They doubled the lead five minutes later, a precision pass from Taylor  found David Weatherstone on the right wing who stayed onside before running through to fire under the keepers body, although Grindlay should have done better in stopping his effort. 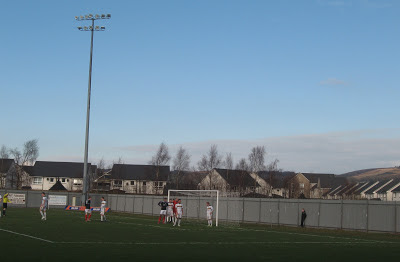 Dumbarton improved in the second half, but only a slight improvement, the early goal didn't arrive which was badly needed to give them hope of salvaging at least a point. As the game progressed it looked more likely that Falkirk would add to their tally as they continued to frustrate the hosts and they saw the game out with ease to pick up the three points.

Prior to the kick-off I spoke to the head steward and asked if it was possible to take a picture of the stand from the opposite side of the pitch. He was very cooperative and said it wasn't possible with the players currently warming up on the pitch, but insisted he would happily escorted me over at half time. Come the interval my new friend in the hi-vis wasn't visible at all until the players reappeared for the second half, as he had forgotten all about me, offering his sincere apologies and requested if I could possible wait until full time. As I had to catch the 1704 train back to Glasgow I was pushed for time but the game finished without too much stoppage time, so as soon as the referee saw off the players and exited down the tunnel he immediately honoured my requested.
I had another pleasant day ticking off another Scottish League ground. The journey was stress free as the six trains I boarded ran like clockwork and of course my afternoon was made more complete by attaining that vital money shot! (see below) 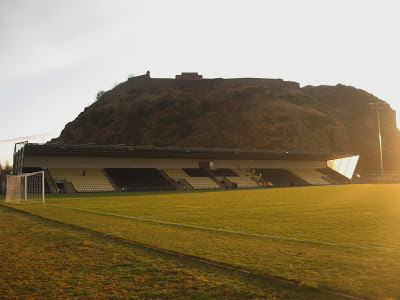