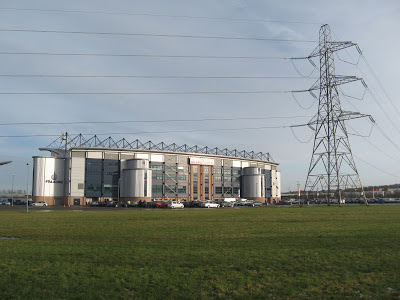 Due to the inclement weather at this time of the year, I generally don’t pre-book trains and make definite plans, particularly when it comes to heading off in a northern direction. However I wasn't going to waste a work free Saturday, so I managed to line up a 3G plan B and C in case plan A didn't come off, plus there’s always Plan D of course – no football but a day in Edinburgh on the lash!

As it turned out the B and C plans weren't necessary as my initial plan of a trip to Falkirk Stadium was a definite goer, apart from an early morning plea for volunteers to help take the covers off the pitch, there weren't any problems whatsoever of the match being in doubt.

Falkirk is a town in the Central Lowlands of Scotland, which lies in the Forth Valley, almost halfway between the major cities of Edinburgh and Glasgow.
Its locality at the junction of the Forth and Clyde and the Union Canals, made the town an ideal location as a centre of heavy industry during the Industrial Revolution. The town was the hub of the iron and steel industries during the 18th and 19th centuries, especially the Carron Works (also the name of the town’s JDW pub I visited) in the nearby village of Carron, responsible for making Carronades for the Royal Navy and pillar post boxes throughout the UK.
Attractions in and around Falkirk include the Falkirk Wheel(which I've been on and it’s not exactly Alton Towers!) Callendar House and remnants of the Antonine Wall, the northern frontier of the Roman Empire which stretches across the centre of Scotland, passing through the town with its remnants seen at Callendar Park. 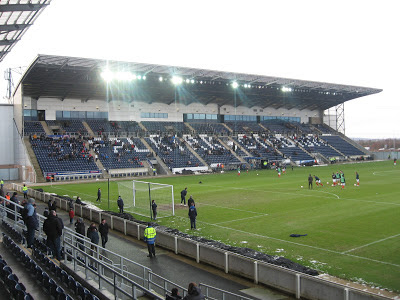 The town folk of Falkirk are known as "The Bairns", which is replicated in the Falkirk Burgh motto: "Better meddle wi' the de'il than the Bairns o' Fa'kirk” This is also the nickname of Falkirk Football Club, who were founded around 1876. The club were elected to the Second Division of the Scottish Football League in 1902–03, and after two seasons won promotion to the top division, going on to twice finish league runners-up to Celtic in 1907-08 and 1909-10 the highest league finishes in their history.
The Scottish Cup first appeared in the Brockville trophy cabinet in 1913, beating Raith Rovers 2-0 in the final, although they had to wait another 44 years to lift the trophy again after beating Kilmarnock in a replay in 1957. The bairns also reached the final of the League Cup in 1947 and in recent times have won the Scottish Challenge Cup on four occasions in 1993, 1997, 2004 and last season with a 1-0 win over Hamilton Accies.

Falkirk played home matches at three different grounds during their primary years at Hope Street, Randyford Park and Blinkbonny Park. In 1884 they returned to Hope Street which became Brockville Park, remaining the club's home ground for the next 118 years.
In 2003 Brockville was sold by the club to the Morrison supermarket chain for £9 million, of which £2.8 million went towards the construction of the imaginatively named Falkirk Stadium, with a further £200,000 coming from sportscotland.
The stadium project was a partnership between the Football Club and Falkirk Council who set up the Falkirk Community Stadium Ltd which provided the funds to construct and run the stadium. Falkirk Council initially funded just over half of the £6.1m for the first stage of the building work, while the football team ground shared at Ochilview Park during the 2003-04.
The stadium has been built in stages, with the main west stand constructed first and completed in time for the 2004–05 season. Falkirk hosted their first game at the stadium in July 2004 with a friendly against Dundee, which they lost 2–1, followed by the first league game a month later against Hamilton which finished in a 1-1 draw. The stand has a large single tier of royal blue seats split into two sections, the bottom has the stadium name picked out in white with a smaller section fenced off at the top in front of the executive boxes. The stand also houses the changing rooms and club offices and naturally the tunnel and dugouts.
Work began on the second stand in October 2004 on the north side of the stadium. The stand cost £1.58m with a capacity of 2,000. The stand is a basic one tier structure broken up into six sections of blue seats, which is now used as the away end.
The south stand construction began in December 2008 by contractors Ogilvie, supported by a £2m pledge from Schuh founder and Falkirk fan Sandy Alexander. The stand is identical to the north stand and was officially opened in August 2009 in a friendly game against Royal Antwerp. Just prior to the stand opened the joint venture between the club and the council ended, with the football club taking full control of the ground facilities, whilst the council retained most of the sites development rights and manages and receives rent from businesses set up the stadium's main stand. The stand has a unique feature of murals of past players displayed against the wind shields at each side.
The stadium has used a temporary stand on the empty east side in the past which takes the capacity from the current 8,000 to around 9,200. 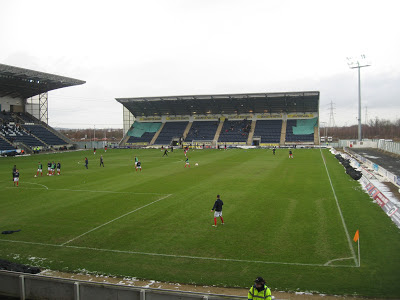 It was good to see green land and sunshine again, instead of grey days and the white shite which we’ve put up with over the last few weeks. I arrived in Edinburgh nice and early at 0930, which gave plenty of time to do my usual thing of going vinyl hunting and exploring a few pubs.
I headed across to Falkirk at 1pm, the Dunblane service takes about half an hour, so sufficient time to check in to the local ‘Spoons and walk along to the ground. As you arrive towards Falkirk Grahamston you can clearly see the stadium and it seems miles away from the station, but the walk only takes around 20 minutes, straight along the A904 road towards Grangemouth.
I requested a press pass for this match but my email was greeted with suspicious. The responsive line of ‘who are you doing the match report for’ a imprudent response to my usual blueprint email I send, which is generally answered with a ‘yes no problem, see you Saturday’ (The info was in the email!?!…Eddy)
Similar to a lot of new stadia, electronic scanning tickets for matches have to be bought separately at the ticket office instead of paying at the turnstile which can be a bit of a clart on. The club shop sell tickets, so after buying a pin badge I purchased my seat, asking for behind the goal. The lady responded with “an adult ticket…yeah?” meaning she either thought I was an OAP or a juvenile, I hope she was thinking the latter as that’s no way to address the Handsome Groundhopper! 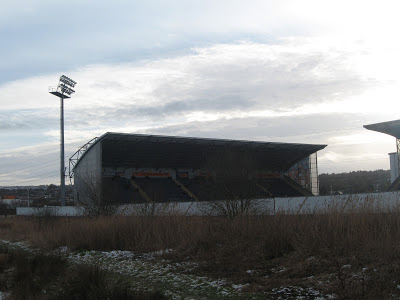 Falkirk faced Airdrie United, a club the Bairns have never lost to since Airdrieonians reformed as United in 2002. That long run looked set to continue as the hosts took a fifth minute lead. A lovely interchange of passing around the box released Lyle Taylor who stayed onside before firing a left foot angled shot past Kenny Arthur.
Airdrie had made an encouraging start to the game but fell further behind on 23 minutes, when a cross from the right fell nicely into Stewart Murdoch’s path, the ball sat up just right allowing him to rifle an unstoppable drive from 20 yards into the keepers right hand post. Falkirk went into the half time break three goals to the good as Taylor headed home from a right wing cross, which rounded off a great first half performance.
Airdrie pulled a goal back just before the hour mark through substitute Di Giacomo. Defender Darren Dods was adjudged to have fouled Buchanan in the box and the penalty kick was successfully converted.
Arthur made a string of fine saves to keep the Diamonds in the game but the three goal cushion was finally restored on 73 minutes when Fulton’s corner kick was headed home at the far post by Dods.
With a quarter of an hour remaining it looked a case of how many more the Bairns would score but the visitors produced a late flurry. On 88 minutes McClaren curled home a delightful free kick from 25 yards then minutes later Kieran Duffie fired home, but it was too much too late as Falkirk comfortably seen out the last few minutes to claim victory.
My visit to the Falkirk Stadium produced a terrific game with some cracking goals. The three points puts Falkirk at the half way position while Airdrie have now slumped to the bottom of the table.

Those of you who follow me on twatter or on Friendface will already be aware my pending changes at my workplace and my big transfer window move from the biggest industrial estate in Europe to the largest indoor shopping complex in the north of England. Part of the transfer deal was a weekend off every 4 weeks instead of the current six, so now I only have to wait a month in between groundbagging days out. So this means I haven’t long to wait for my next return to the Scottish First Division with a trip to Dumbarton on the 23rd February, when their opponents are coincidently Falkirk, so hopefully I can look forward to another thrilling encounter from the Bairns alike to which I witnessed this afternoon.

Squad #123 Ian Cusack and #173 Andy Hudson were also in attendance.You can read Ian's account of the day on his blog Payaso del Mierda
on January 27, 2013
Email ThisBlogThis!Share to TwitterShare to FacebookShare to Pinterest
Labels: Airdrie United, Falkirk

Nice article, glad you enjoyed your day north of the border. It's actually really interesting to hear you talk about where the nickname 'The Bairns' came from - the motto of the town - I never knew that.

I've been a fair few times to the Falkirk stadium and have seen it transform as you have mentioned from one stand to two. The football itself was always indifferent, but there was one thing you could rely on - it would be absolutely freezing!

The stadium is actually in grangemouth