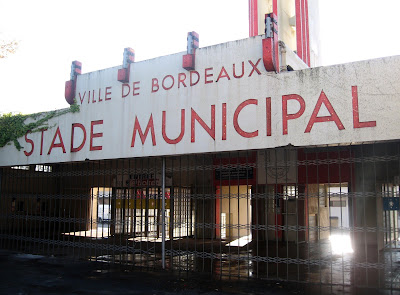 After the events in Brugge last month I decided on a more straightforward and hassle free trip for Newcastle’s final group game in this season’s Europa League. The destination for matchday six was the port city of Bordeaux, found on the Garonne River in the Gironde area of south-western France.
Due to work commitments I was a day tripper for this one, doing the round trip on my day off, meaning an early start for the 0630 flight from Newcastle International Airport.
On this occasion I didn’t have the company of my usual NUFC travel companions; Mr Patrick senior and junior, however I was chaperoned by Honest Paul, who regular readers will remember as the chap who was falsely arrested and left behind in Belgium on our last Euro jaunt.
The flights were booked through Newcastle United’s official travel partner Thomas Cook, so all our travel needs were taking care of, such as transfers from the airport into Bordeaux and later onto the match, as well as inflight meals plus our match ticket was guaranteed.

As I’ve mentioned, this was thought to be a stress free excursion, but the heavy snowfall in the north-east on the eve of the game saw the United players and staff unable to take their scheduled flight to Bordeaux. The team were stranded on the runway at Newcastle airport, stuck in the snow for several hours until it was safe to depart, which delayed their arrival and disrupted preparations for the match.
I heard this news on Radio Newcastle, whilst working on Wednesday evening, driving back to the Team Valley from Newcastle city centre. This drive normally would take about 15 minutes in teatime traffic but because we live in Britain and have a major problem when cold white stuff falls from the sky, this short journey took the length of time it would take to watch a full football match, including stoppages and “Fergie time” 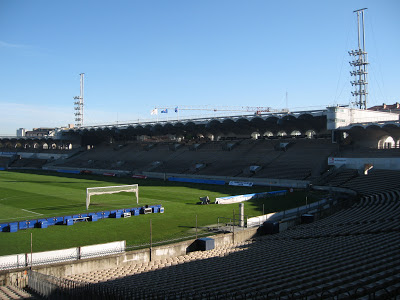 We booked a taxi for 4.45am, so I crawled out of bed thirty minutes earlier and was relieved to find there hadn’t been any overnight snowfall. We arrived at the airport to find my pre-travel concerns laid to rest as there were no problems and our flight was on time.
The flight took just under two hours and it was great to arrive in sunny Bordeaux with just a quick passport check and no luggage to wait for. The coach was already waiting or arrival, the transfer into the city centre took half an hour and we were accompanied by a French lady who gave us a potted history of this fine city on route to our drop-off point.

The Bordeaux metropolitan area lies in the north of the Aquitaine region, being the sixth largest populated urban area in the country with over 1.1m "Bordelais" and "Bordelaise" citizens.
The city is known as "La perle d'Aquitaine", "La Belle Endormie" (Sleeping Beauty) in reference to the old centre which because of pollution had blackened walls, although some parts of the city have been restored to their original state. The historical part of the city is on the UNESCO World Heritage List as "an outstanding urban and architectural ensemble" of the 18th century.
Bordeaux is most famed as the world's capital of the wine industry, producing vino within the region since the 8th century and plays host to Vinexpo; the International Wine & Spirits Exhibition.

FC Girondins des Bordeaux was founded on 1 October 1881 initially as a gymnastics and shooting club, before later adding other sports such as rowing, equestrian, and swimming. It wasn’t until 1910 that football was officially introduced, the trial lasting only a year before returning almost a decade later in 1919, so it wasn’t until 1920 that the club contested its first official match defeating Section Burdigalienne 12–0.
The club is one of the most successful clubs in French football, winning six Ligue 1 titles, three Coupe de France titles, three Coupe de la Ligue titles, and Trophée des champions three times. In 1995-96 they reached the final of the UEFA Cup, but lost the two-legged final to Bayern Munich. 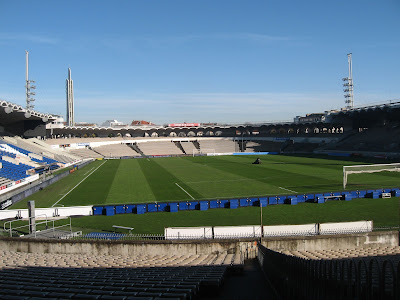 The coach dropped us off next to the Monument Aux Giorondins with an arranged 5pm return to take us to the match, so we had seven hours free to explore the city and of course this also meant we had time for a pint!
We decided to start the day with a walk to the stadium, so I could take some daylight pictures with refreshment stops on the way to break up the walk. When we arrived at the ground I was disappointed to find the entrance gate locked, but we found the main entrance around the other side by walking along a terraced street.  I noticed a couple of hardhat workman at the stadium, coming in and out of a small gateway, so we brazenly followed them and walked into the impressive empty arena, where I was able to snap away at my heart’s content.

The Stade du Parc Lescure was first built in 1930 as a cycle-racing track, and then in 1935 it was restyled to accommodate football in preparation for France hosting the 1938 World Cup. It was the first stadium in the world to be completed with concrete and covered stands without any pillars obstructing the view of the pitch. The record attendance was 40,211 on the 24th April 1985 as Girondins de Bordeaux hosted Juventus in the semi-final of the European Cup.
The stadium was expanded to 34,462, as Bordeaux was selected as a host city for the 1998 FIFA World Cup, staging 6 matches as well as playing host to four games in the 2007 Rugby World Cup.
All four sides are mainly open, decked out with beige bucket seats with cover for a smaller section of seats at the rear. The cover is a rolling concrete semi-circle structure which gives the stadium a classic look. The main stand seats differ with a blue and white central section above the team dugouts and tunnel, inside the connection between the changing rooms and the pitch entrance is the longest in Europe at nearly 120 meters. There is also two video screens pinned to the inside wall at the side stands.
In 2001 the stadium was renamed Stade Chaban-Delmas in honour of politician Jacques Chaban-Delmas, who was the mayor of Bordeaux from 1947 to 1995.
In July 2011, the club announced plans to construct a 43,500 capacity new stadium, located in Bordeaux-Lac, as yet again France has won the right to host another football tournament, staging Euro 2016. 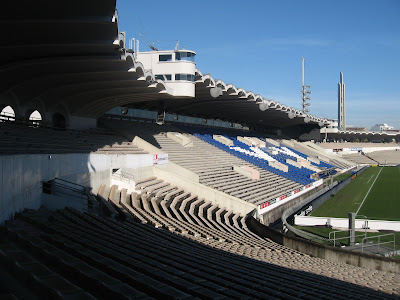 We spent an enjoyable day strolling around this historic city and frequently stopping for a drink, calling at a couple of café bars and a few British and Irish pubs, namely the Blarney Stone, the HMS Victory and the Sherlock Holmes. Apart from having a few bevvys we also went for a meal, enjoying a delicious pizza with Honest Paul footing the bill with his Brugge compensation money. We did ask the waitress if she had frogs legs, when she said “Qui” we told her to hop to the kitchen and bring us two pizzas!
We looked around a few shops as Paul was determined to buy a beret. After asking in several stores but he wasn’t having much luck, mainly because the locals had no idea what we were asking for. We eventually found a specialist hat store where they had a selection of berets in a variety of colours. Paul was chuffed to purchase a black one for 10 euros, while I tried on the red number in honour of Captain Sensible, the bass player with The Damned. However it was a look I couldn’t pull off, so I decided not to bother but my travel companion was cock-a-hoop with his purchase. 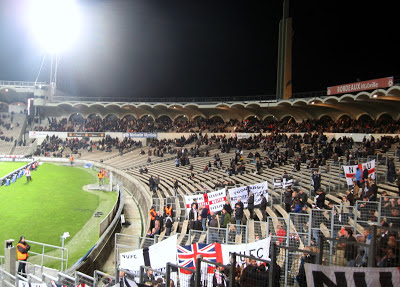 The final Group D match was a dead rubber with both clubs guaranteed their place in the knockout phase in February. Considering the Magpies present injury list and current poor run of form I was expecting “Nul points” from this game, never mind the required victory which would see United win the group.
The match went exactly as I had anticipated with a goal in each half from striker Cheick Diabate settling the tie. The big Mali striker’s glancing header on 29 minutes put the hosts in a buoyant mood with some fine saves from Rob Elliott on a rare United start, limited the goal tally to just one at half time.
Bordeaux sealed victory on 73 minutes when Diabate latched on to a through ball before easily out-muscling and outpacing Williamson and firing past Elliott.  The win guarantees the French side a seeded spot in the knockout draw, while United will face one of the group winners or Champions League drop outs.

I thoroughly enjoyed this European trip, what made it so great was it was well organised and everything ran like clockwork. The city was very welcoming and the local resident’s friendly, although I did have a wee confrontation with a workie-ticket poliss outside the stadium, which meant it could have been my turn to be left behind in custody on foreign shores. Call me a snob if you like, but I do prefer this kind of foreign trip when there is a smaller support (1,200 attended) to when the Toon Army take a place over, as if you’re back hyem in the Bigg Market. I was home and tucked up in bed at twenty past midnight and up again for work at 5am, which meant I got home quicker from France than I did the night before when I was stuck in traffic.
I'm looking forward to the draw for the next round and hopefully I can do another Euro jaunt in the new year, however on the pitch United need to drastically improve and strengthen the squad in January or the Round of 32 could be the Magpies last fixture in Europe for a while.