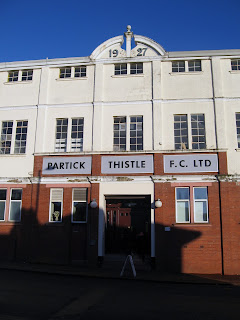 Similar to my matchday at Albion Rovers last month, I had pre-booked trains to Edinburgh unaware of which Scottish Cup fixture I would be attended until the draw was made. After scrutinising the fixtures I decided to head west from Edinburgh and have a day out in Glasgow.

Partick Thistle Football Club are based in the Maryhill area of Glasgow. The former burgh takes its name from Hew Hill, the Lord of Gairbraid, who left his estate to his daughter Mary Hill, who married Robert Graham of Dawsholm in 1763. They used the land on the estate to form coalmines which turned out to be non-profitable, but much needed finances were provided when Parliament approved the cutting of the Forth and Clyde Canal through the estate in 1768.


Maryhill has also featured on both the small and big screen, as Maryhill Police Station is the home of internationally famous TV Glaswegian detective Taggart and in the movies a café and a pub supplied scenes in the film Trainspotting. 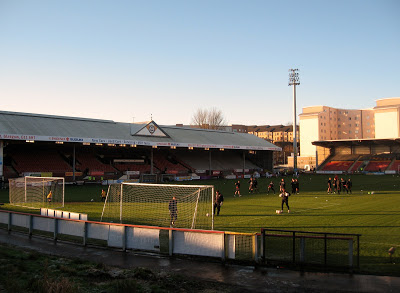 The club formed in the burgh of Partick in 1876 and played at various grounds including Kelvingrove, Jordanvale Park and Muir Park. In 1891 the club settled next to the River Clyde at Meadowside, but were forced into another move to make way for a shipyard in 1908.
The club played all their home games during the 1908-09 season at various grounds in Glasgow until securing a site owned by the Caledonian Railway in Maryhill for £5,500, which finally became their  settled  home, which means they haven’t played in their birthplace for over 100 years.

Thistle became founder members of the Scottish League Second Division in 1893 and have won silverware in major cup competitions, beaten Rangers 1–0 in the 1921 Scottish Cup final and also winning the League Cup in 1971–72, the Jags hammering hot favourites Celtic 4-1 in the final.  As far as the League competition is concerned, Thistle achieved third place finishes in the top division in 1948, 1954 and 1963.
Firhill Park got off to a bit of a false start, as it was due to open on the 21st August 1909. The first match was postponed because it had not been declared safe for public use and without planning consent, so the ground opened a month later.
Major ground work commenced during the 1920s with the main stand constructed in 1927. It was during this decade that the record attendance was set for a Thistle game when 49,838 saw The Jags take on Rangers in 1922. Then the stadium record attendance was set a year after the main stand was opened for a British Home Championship game between Scotland and Ireland, when 54,728 people attended the international fixture.
Extra income was raised when the ground hosted greyhound racing in the 1930s, but further improvements weren’t made until the early 1950s, with cover added to parts of the terracing and floodlights installed, which were first switched on for a friendly match against Tottenham Hotspur in November 1955.


Firhill’s capacity was cut in half following the Safety of Sports Grounds Act in 1977, reduced down to 20,500. In 1986, Firhill became the first Scottish ground in the modern era to allow a ground share, when Clyde moved in for 5 years after being evicted from Shawfield. Hamilton Academical also shared Firhill in two different spells from 1994. 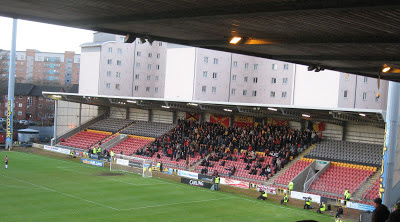 The original Main Stand is still standing but is no longer in use due to maintenance costs. The stand was original built with a 6,000 capacity, but now houses about 2,900 seats with a small terraced enclosure at the front. The stand now has an office block at one side and its here where the players enter the park. The team dugouts are still situated at the front and the stand is only used by club officials, unless there’s a big game, such as a clash with the old firm when the stand opens to increase capacity.
The Jackie Husband Stand named after the former Thistle player, opened in December 1994. The impressive large cantilever stand replaced the huge section of enclosed terracing on the east side. The stand is decked out with mostly grey and silver seats amongst the 6,263 capacity which includes the press area at the rear.

The North Stand was built in 2002 to meet the SPL criteria on stadium capacity which stated at the time that clubs must have a minimum of 10,000 seats. The 2,014 capacity stand originally ran two thirds the length of the pitch, but was extended in 2003 after the sale of some land to allow the construction of student flats behind the stand. This is also decked out in silver with a band of seats in the club colours.
There are plans for a new 1,000 seated family stand at the disused south end, although planning permission still hasn’t been granted on the grass bank, which is known as “The Bing” to Thistle fans. Now that Firhill is an all seated ground, its turned from a park to a stadium with a current capacity of 10,887. 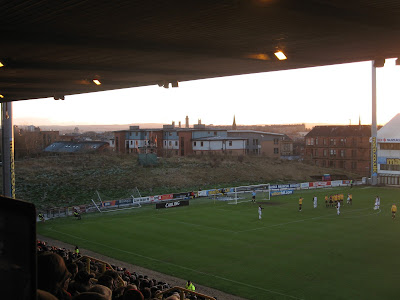 Dunfermline gained revenge for their 5-1 gubbing by The Jags just three weeks ago, to knock the First Division leaders out of the Scottish Cup in an eventful tie at Firhill.
The decisive goal came after 35 minutes when Andy Barrowman got on the end of a right wing cross to nod home at the far post. This came after the home side were reduced to ten men when Thistle defender Aaron Muirhead was adjudged to have been the last man, given a straight red card for a foul on Craig Dargo in the 28th minute.
Up until this point the game was an even contest, but The Pars made good use of the extra man and should have finished the game off on the hour mark, but were denied by fantastic double save from Graeme Smith, saving a Husband effort from eight yards and the follow up shot from substitute Cardle, to keep his team in the tie.


Thistle were awarded a penalty on 72 minutes when Chris Erskine was felled in the box by Andy Geggan. From the resulting spot kick Dunfermline ‘keeper Gallacher tipped Ross Forbes’ effort onto the post, then the ball agonisingly rolled along the goal line before being cleared by the visitors defence.
From this moment you knew it wasn’t going to be Thistle’s day, and even the sending off of Barrowman, who received a second yellow card on 90 minutes for a late challenge on Sinclair, didn’t make any difference to the outcome as Dunfermline secured their place in the 5th round draw. 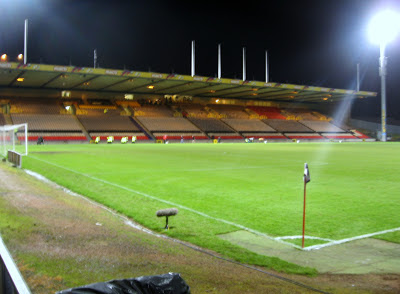 As this is probably my last visit to Glasgow for a while, I made the most of my time in this great city by adding more fuel to the fire regarding my OCD problem of drinking in Wetherspoons pubs wherever I may be. I visited five previously unchartered JDW pubs; Camperdown Place, The Edward Wylie, The Hanglers Circus, Crystal Palace, with the pint of the day going to Cairngora‘Wildcat’ (5.1%) in The Society Rooms. I headed up to Firhill at around 2pm catching the subway from Buchanan Street to St Georges Cross. The Glasgow tube service is shit-hot, so fast it knocks the London Underground into a cocked-hat, from boarding the train I was on Maryhill Road after only three minutes; from there it was a 15 minute walk up the hill to the stadium.
Outside the ground I bumped into Steve McCann – Travelling Fan, who turned up at this game after his original plan of going to Cowdenbeath became a victim of the frosty weather. We arranged to meet up for a pint in Edinburgh afterwards, but in the end this wasn’t possible as we both missed the 1715 train, so I had insufficient time for a bevvy.
I requested a press pass for this game and on arrival the lovely Stacey was on hand to welcome me to Firhill, after forgiven her for spelling my name wrong, she pointed me in the direction of the press room and told me to help myself to hot drinks and sandwiches, which I gratefully devoured after working up quite an appetite following my JDW Glasgow tour. There was also scotch pies to be had at half time, which wasn’t a surprise, as your always well looked after, making sure you’re properly feed and watered on this side of the border.
It was great to finally catch up with Partick Thistle on their own patch. I’ve always had a fascination with The Jags as their red and yellow strip is the closest attire to the mighty Melchester Rovers, although I’m not too impressed with this season’s fashion range of yellow shirt with red pin stripes. Partick Thistle may not have had that amount of over the top success or never had a prolific blonde haired record breaking striker (What about Mo Johnston?…Eddy) but they are a smashing little outfit and a proper community based club and I wish them all the best in their pursuit of the First Division title this season and a return to the SPL. 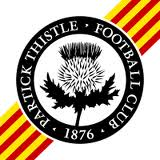