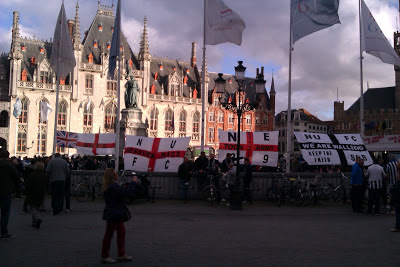 In the hundreds of matches travelling with NUFC I’ve never known an away game cause so much anxiety, concerning if I would actually be going. Following the draw for the Europa League Group Stage, I booked four tickets on the Eurostar that evening for myself, the Patrick’s (Squad #2 and #79) and my mate from work Honest Paul. We were pleased with the £81 return fare, which left us with just our travel arrangements to London and our accommodation to sort out.
The next hurdle was a match tickets, but initially this wasn’t a problem as my nominated ticket buyer has top loyalty points, but when the news broke from the Belgium tourist board that 16,000* people had booked travel from the UK around that matchday, I became a little concerned.(* That estimate was OTT as around 7,000 travelled)
The real pre-match angst kicked in when Club Brugge announced that the Toon Army would receive the minimum allocation of 1,470. Last season Birmingham City were giving 6,000 tickets, but the club stated their reason was simply that Newcastle are a bigger club with a greater demand from the Brugge public to see the match, although at the time tickets sales were going slowly with at least half the stadium remaining unsold.
Despite Newcastle United’s request for more tickets, Brugge refused to budge, which put a big doubt on tickets for my travel companions, plus there was talk that names would go on tickets to match passports, so we resigned ourselves that we may not be going to Belgium after all, with the added blow that 540 tickets were already bagged with the official travel party.
The fact that your reading is tells you that we got tickets, but successful applicants were giving heavy handed warnings regarding drinking, the none use of public transport and most important of all, anyone found anywhere near the stadium without a ticket would be arrested.
After receiving our tickets and reading the anti-English press release from the Brugge authorities, one week on their attitude completely changed, taking a kind of best pal, arm around the shoulder, welcome to our beautiful city, get yer’sel a pint, an overall renewed approach to our pending invasion. The fact Newcastle beat Brugge at St James Park was probably the reason our Flemish hosts became more accommodating, as maybe their supporters’ enthusiasm for the return match had somewhat diminished.
The next piece of news to come from Brugge was when; as if by a magic wand, an additional 900 tickets appeared and the previous threats to ticketless Newcastle fans in the vicinity of the stadium changed from “your nicked” to a lot less threatening; “you’ll be sent away" And so after booking up, not being sure if I was going, then not looking forward to it, I headed to Belgium in good heart on another European adventure. 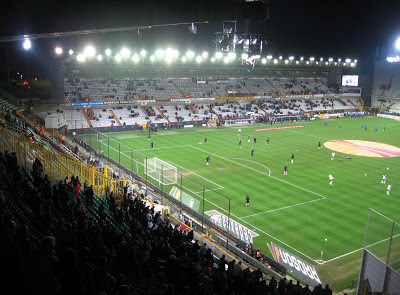 Bruges Frenchch: Bruges, [ˈbrpre-trave is the capital city of the province of West Flanders in the Flemish Region of north-west Belgium, occasionally known as "The Venice of the North" and once one of the richest ports in the world.
The oval shaped historic city centre is a prominent World Heritage Site of UNESCO, with most of its medieval architecture still intact. The major sights includes the Church of Our Lady, whose brick spire reaches 401.25 feet, making it one of the world's highest brick towers buildings, and the sculpture Madonna and Child, which can be seen in the transept by Michelangelo. The most famous monument is the 13th-century belfry, housing a municipal carillon comprising 48 bells, which still employs a full-time carillonneur, who regularly gives free concerts.

Club Brugge Koninklijke Voetbalvereniging (Flemish pronunciation) was founded in 1891, created by old students of two schools; Broeders Xaverianen and Koninklijk Atheneum. The Blauw-Zwart is one of Belgium’s most successful clubs, winning a total of 36 domestic honours including 13 league titles. They are the only Belgian club to have played in the European Cup final, beaten by Liverpool at Wembley in the 1978 following on from also losing to the scousers in the UEFA Cup final two years earlier. 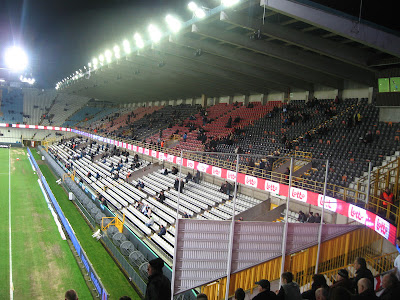 Jan Breydel Stadium is a multi-purpose stadium in the Sint-Andries area of Brugge, The city-owned structure was built in 1974 and opened the following year, built as a replacement stadium for the city’s two professional clubs - Club Brugge and Cercle Brugge,
The stadium was initially called Olympiastadion with an estimated 30,000 capacity, which was cut down to 18,000 in the 1990s when the terraces were converted into seating areas.
The stadium was revamped after it had been selected as venue for the Euro 2000 championships, which saw the main stands refurbished and the stands behind each goal extended which brought the capacity up to a 29,472 seated arena.

The main stand has two tiers decked out in silver seats with executive boxes along the back. Behind both goals there is a large top tier and small bottom section. The end where the main vocal support gathers has the stadium name picked out in cream amongst sky blue seats and the stand wraps around to meet the side stand. The away end has the same design as the opposite goal with sections of green and white seats and also a small standing terrace in the corner. There are two video screens in the corners and an electric scoreboard behind the home goal.

In order to qualify for grants from the Flanders government a more Flemish name was required, which led to the name change to Jan Breydel Stadion, a folk hero from the 14th century, a leader of the Bruges Matins in the revolt that led to the Battle of the Golden Spurs. During the Euro 2000 tournament the stadium hosted three group matches and the quarter-final between France and Spain. 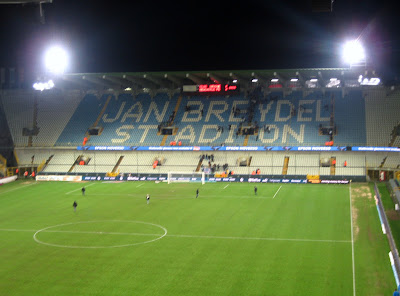 Brugge definitely wasn’t one of my better Euro trips, but as is always the case with NUFC on foreign shores, it will certainly go down as a memorable one.
The trip started at 5.15 on Wednesday evening, when Ian picked me up to drive us to my mate Decka’s in the east end of London, who was good enough to let us crash out at his flat in Woodford Green.
An early start on Thursday allowed us plenty of time to drive through to Cockfosters to park up the car, before taking the tube to Kings Cross/St Pancras for the 0857 Eurostar service to Brussels. We arrived in the Belgium capital around noon and didn’t have long to wait for our connection train to Brugge, so after leaving Decka’s at 6am, we reached our final destination by 1.30pm local time.

On arrival we took the long walk down to our pre-booked hotel, south of the city in Sint-Michiels, where we dropped off our gear, necked a couple of beers then took a taxi to the market square to savour the pre-match atmosphere.
Nowadays, the thing about travelling away amongst the Toon Army is almost everyone gets totally pissed, well maybe not all and sundry, but at least a good 95% do. This occasion was worse than ever, by the early evening there were people staggering around Brugge like extras from the TV series The Walking Dead. This was because of the high quality Belgium beer which is high in alcohol content, a subject which I discussed with the barman at our hotel, who described beers at 4 and 5% as “children’s drinks”

We stayed in and around the market square savouring more bevvys, especially liking the Leffe beers, enjoying the blonde, brunette and dark varieties. When it came to match time, ticketless Honest Paul left us to go to a bar to watch the game, while the three of us tried in vain to catch a taxi or bus, neither of which were readily available, so this meant a hell of a long walk to the Jan Breydelstadion.
This wasn't a problem for a fit athlete like myself, but for Ian, who has trouble with his legs, hip and back, this was a nightmare. I can’t see why the local authorities couldn't put on transport from the city centre to the stadium, instead of an on foot police escort. The traffic was halted at certain points on the route, so surely a dozen or so buses would have been an easier and safer option.
Half way along the route I took haste ahead of Ian and Lee to allow time to take some photographs before the game, while Ian soldiered on and did well to get to the ground just before kick-off, plus he also had to suffer the walk back to the hotel afterwards as there were still no taxis allowed anywhere in the vicinity. 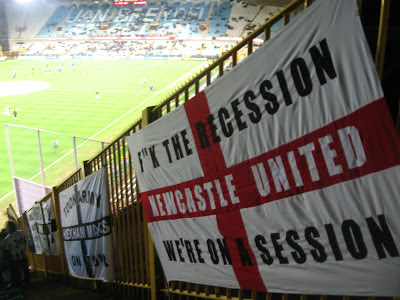 Newcastle came back from a disastrous start to earn a point in a thrilling Group D Matchday 4 fixture. Brugge burst into a two goal lead in the opening 20 minutes courtesy of a 14th minute strike from Trickovski, followed by a 20 yard daisy cutter from Jorgenson five minutes later which sneaked in at Krul’s right hand post.
United finished the first half strongly and halved the deficit on 41 minutes with a tremendous volley by Vernon Anita from the edge of the box, then just before the interval Shola Ameobi grabbed his 14th European goal, latching on to a pass from his young ‘un to poke the ball home.
The second half was more entertaining as both teams continued to carve out chances, but neither side managed to add to their tally and overall the draw was the correct result which puts United in a healthy position in Group D.
After the full time whistle the Brugge players did a lap of honour and also showed their appreciation to the Toon Army, likewise the Brugge fans who saluted our support which was a nice touch and a tremendous gesture. 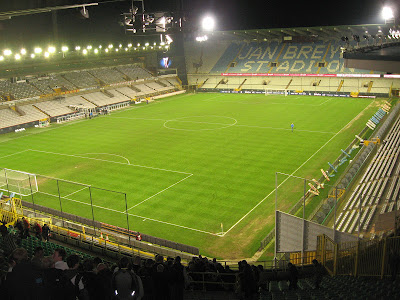 Amongst the few things I’ll take away from my time in Brugge is the friendliness of the locals, the wonderful medieval architecture, the quality ale, the numerous chocolate shops and the large number of cyclists. (Especially the “bike fanny…Eddy)”
We departed this fine city on the 0535 train to Brussels, the reverse journey saw me sitting with my feet up with a cuppa in Gallowgate View at 2.30 on Friday afternoon. Overall it was an eventful few days and there’s so much more I could have reported on, which I've had to leave on the cutting room floor - There’s the incident when we met Papiss Cisse incognito in a café bar, the vibrator and slippers story, the snoring whodunit at Decka’s, but most important of all whatever happened to Honest Paul? Well he did eventually get a ticket for the game but unluckily didn't see any football. Ian bought a large amount of tobacco in the market place and gave it to Paul for safekeeping, so he ended up taking it with him to the match and it was there on one of the four ticket checks, that he was lifted on suspicion of selling contraband to supporters.
There is two key points to success, the first of which is to not reveal everything and there’s so much more I could report on this matchday, but I’m afraid I’ll have to keep back the finer details to be revealed at a later date, some decent material for a future book perhaps. 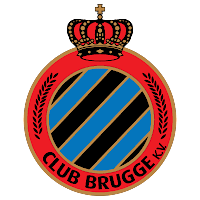 Honest Paul update;
Released without charge 10am Friday morning.
Caught a train to Amsterdam, where he eventually caught a flight returning home at midnight on Saturday night, some 34 hours later than we did.