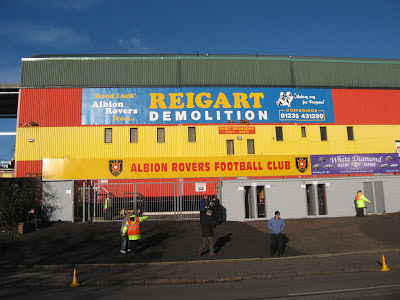 Albion Rovers’ Cliftonhill Stadium is one I’ve had an eye on for this season. I pre-booked trains to Edinburgh for this date back in September, knowing it was the third round of the Scottish Cup, but unaware where my match destination would be, but luckily the balls rolled kindly pairing Wee Rovers at home to Greenock Morton.

Albion Rovers play in Coatbridge, a town set in the central Lowlands in North Lanarkshire, situated 10 miles east of Glasgow city centre. The area’s earliest known settlement dates back to the Stone Age, however the town can be traced to the 12th century, when a Royal Charter was granted to the Monks of Newbattle Abbey by King Malcolm IV. Coatbridge, along with the neighbouring town of Airdrie, forms the area known as the Monklands.
The area developed from a loose collection of hamlets during the late 18th century and came to prominence during the industrial revolution, and in particular with the hot blast process. Coatbridge was a major Scottish centre for iron works and coal mining during the 19th century and in this period was described as 'the industrial heartland of Scotland' and the 'Iron Burgh'. 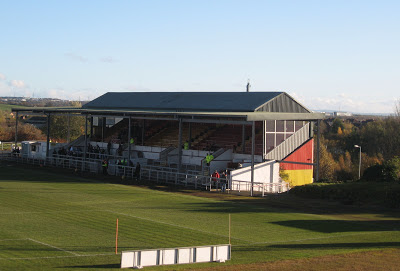 Albion Rovers formed in 1882 after the merger of the two Coatbridge sides Albion FC and Rovers FC. The club joined the Scottish Football League Second Division in 1903, but were forced to move to the Western Football League in 1915 after the Scottish Football League merged into a single division structure, with the second division scrapped.
Rovers returned to the single division Scottish League for the 1919–20 season, and in the same year reached the Scottish Cup Final. Although they lost 3-2 to Kilmarnock in the final in front of 95,600 at Hampden, the club’s finest hour came when they knocked out champions Glasgow Rangers in the semi-final.
Rovers remained a top division club until their relegation in 1923. They won the Second Division title in 1933–34 and played in the first tier of Scottish football both sides of the war, until they were relegated in 1948-49.The club have added more honours in winning the Scottish Second Division (third tier) in 1988-89 and the Lanarkshire Cup on eight occasions stretching from 1900 to 1987. 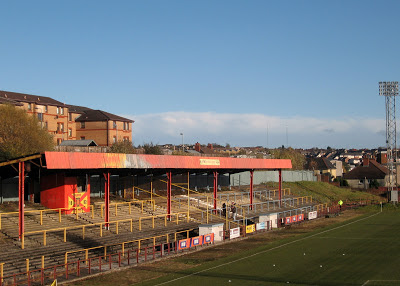 The only player to represent Scotland while on Rovers’ books was Jock White in 1922, however there is one celebrated player who started his career at Cliftonhill, before winning 6 caps for his country and achieving legendary status with two clubs in England. (It’s not Bernie Slaven is it?...Eddy)

Tony Green made 64 appearance for Rovers, scoring 21 goals between 1964 and 1966 before moving to Bloomfield Road for a total fee of £15,500, playing 121 games for Blackpool and scoring 13 times.
In 1971, Green put in a transfer request and Newcastle United secured his services with an offer of £150,000, in a part-exchange deal involving Keith Dyson.

Tony’s career was cruelly cut short when on the 2nd September 1972, a "horrendous” tackle by Crystal Palace's Mel Blyth ended his career aged only 25. Although Green only played 33 games and notched three goals during his Magpies career; he is widely regarded as a Toon great. Newcastle manager Joe Harvey said: "After they made Tony Green, they threw away the mould. I couldn't hope to buy a similar player, not even for twice the amount."
Tony Green has also played a significant part in my own little football world, as his testimonial match in 1974 was the first game I ever attended. Tony made his last appearance in a black and white shirt in a benefit match against Middlesbrough, with United winning 5-3 on a memorable night. 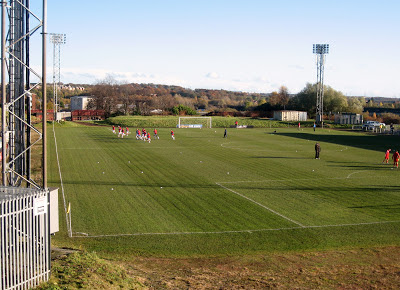 Cliftonhill opened on 25th December 1919. The Main Stand sits high on a rise above the aptly named Main Street. The stand was built in the same year as their only Scottish Cup Final appearance and this along with the front paddock is the only part of the stadium now used on matchdays. The stand has 489 red and yellow wooden flip seats with the peak roof having a flat extension over the standing area which was added in 1994. The club shop and refreshment bar are found underneath the stand.
Opposite is the large covered terrace, which sits empty behind the team dugouts. Behind the goals are barren grass banks with large floodlight pylons in each corner which came from Cardiff Arms Park, when it was demolished to make way for the Millennium Stadium. The current capacity is set as 1,238.
The record attendance was achieved on the 8th February 1936 when 27,381 witnessed the visit of Rangers. Local rivals Airdrie provided the opposition for the first floodlit game in October 1968 and since then the lights at have shined on speedway, greyhounds and stock car racing on its surrounding cinder track.
In 1995 it looked likely that Albion Rovers would leave Cliftonhill and ground share with neighbours Airdrieonians, however opposition from Rovers fans and the local community saw the move fall through.

A new project was recently launched to redevelop Cliftonhill as a multi-purpose sports hub.
The estimated £3.5million scheme, with finances raised from various funding sources, could see the pitch turned around to make more space, with the extra land used to add another full size pitch and further five-a-side pitches. The main stadium would have a capacity of 1500, which would be suitable for the club’s needs.
The ambitious scheme would give huge benefits to the Coatbridge community and Albion Rovers as a whole, you can support the proposed redevelopment by signing the online petition and sending messages of support at ; -
http://www.ipetitions.com/petition/i-support-the-redevelopment-of-cliftonhill-and-the/ 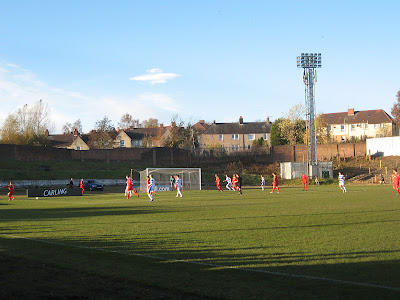 The programme notes for the third round tie with Greenock Morton read; It’s cold, damp dreary, windy and generally miserable. Folks, that can only mean one thing … that the William Hill Scottish Cup is upon us.
For a change the day presented none of the above, instead we had a bright sunny afternoon but a typical cup tie, being the favourite and superior outfit from a higher league dominating possession, with the underdogs battling away in the hope of getting a lucky break, which was exactly how the first half panned out.
Neither keeper was seriously tested in the opening period but the hosts grabbed the lead on the stroke of half time when a left wing cross was nodded clear and fell nicely to Stevenson who kept his composure to fire home a controlled volley from 12 yards.
Morton fought back and equalised, when Michael Tidser's teasing free-kick from the left picked out the unmarked Weatherson, who found the back of the net from just inside the box on 58 minutes.
The final half hour saw the game take a similar path as the first half with Morton unable to break through the Wee Rovers, who earned a well-deserved replay against a side who are unbeaten since August. 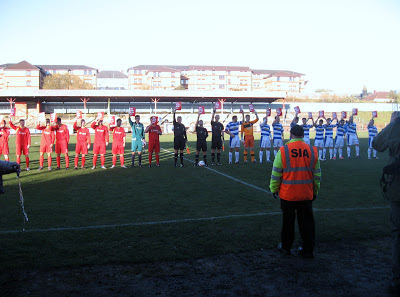 A work free Saturday allowed an earlier than usual train north, so I arrived in Edinburgh just before 1030am. The morning arrival meant I could take a stroll down to Leith and check out a couple of record stores on Leith Walk before a refreshment stop at the JDW Foot of the Walk, another pub which forms part of my ‘Never Ending UK ‘Spoons Tour’.
I then had a noon meeting with the Edinburgh branch of 100FgC; Squad#83 Jamie McQueen and #155 James Little at The Playfair pub, as we originally intended to go to a match together, but the Edinburgh City v Queen of the South tie was more appealing as both these guys have allegiances to the Doonhamers.
I then heading back up to Waverley at 1pm to catch the train to Coatsdyke, the journey west takes about 55 minutes, so I arrived with time to spare to take some Cliftonhill pictures and walk along to Coatbridge to tick off another ‘Spoons; The Vulcan on the corner of Main Street.
I enjoyed my matchday at the unique Cliftonhill and had another splendid day which was rounded off with a pint in the ‘Jinglin’ Geordie’ with Jamie, before catching the 1830 back home. Regular readers of the blog will know that I favour my trips to Northern Britain above all else, and I’m already looking forward to adding another ground tick and watching hopefully more Scottish Cup action in four weeks’ time.

rI am an exiled Rovers supporter, living in Morpeth, Northumberland and don't get to many games but follow every match on "final score" if I'm at home! I thoroughly enjoyed your account of your visit to Cliftonhill and think you would find it welcoming - I always have on my all too rare visits.
It was so refreshing to read, with none of the usual jibes. Of course the ground desperately needs repair but the Club has always been run on a shoestring, living in the shadow of Celtic & Rangers. I think their latest efforts to provide sports facilities are typical of the club - they are football at the grass roots and genuinely want to do something for local youngsters.
I remember Tony Green well & would say without a doubt, he was the best all round Albion Rovers player I've seen. I saw him first away to Ayr United in 1965 - he was full of beans, running rings round his opponents, had a habit of clapping his hands to rouse the other players - unfortunately, he was so fast & skilful they couldn't keep up with him! I knew that day he would not be long with The Rovers but he was very loyal, stayed 2 seasons and honestly won the hearts of all the supporters, nobody grudged him moving - he did go to the very top & we were proud that he had played for us and stayed long enough to let us enjoy his skills. It says it all that he came back occasionally and never forgot his time at Cliftonhill.
Would love to accompany you some time, either to The Rovers, or Morpeth Town or Blyth Spartans - Morpeth has a Wetherspoons!
Yours aye, Alasdair Turnbull

Cheers for this post Alasdair.
I'll be happy to accompany you as well, as look as football and a 'Spoons pub is involved.