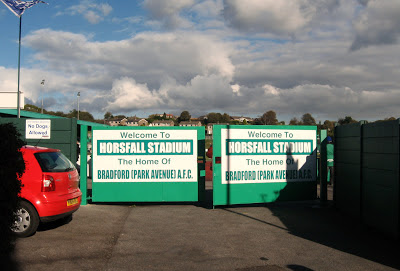 The destination for this year’s Non League Day was West Yorkshire, and a much delayed visit to a famous old name of English soccer; former Football League club Bradford Park Avenue.


Non League Day now takes place on international weekend every year in October, when there’s no top level fixtures taking place. The simple concept is to give football supporters an alternative football experience and encourage fans to lend their support to local clubs at grassroots level, which is something  more rewarding and enjoyable than being obsessively engrossed with Premier League/Championship clubs.

Bradford is situated in the foothills of the Pennines, which became a municipal borough in 1847, before receiving its charter as a city in 1897. The name derived from the Old English “brad” and “ford” - the broad ford referring to a Saxon settlement at the crossing of the Bradford Beck at Church Bank, below the site of Bradford Cathedral, which was recorded as "Bradeford" in the Domesday Book.
Bradford rose to prominence in the 19th century as an international centre of textile manufacturing, flourishing during the Industrial Revolution becoming the "wool capital of the world"
The textile sector in Bradford fell into decline from the mid-20th century. Since then it’s became a popular tourist destination, becoming the first UNESCO City of Film with attractions such as the National Media Museum, Bradford City Park, Cartwright Hall and the Alhambra theatre. Plus I must mention it’s a great city for a decent “Ruby Murray” – crowned “Curry Capital of Britain” last year. 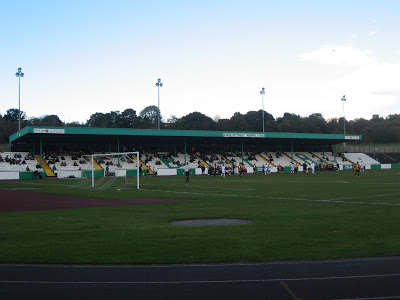 The original Bradford Park Avenue formed in 1907, out of the Bradford FC rugby club (founded 1863) in what is known as "The Great Betrayal" after abandoning the oval ball game for Association Football. The club took their surname from the Park Avenue ground, immediately joining the Southern League replacing Fulham, who had been successful in joining the Football League after Avenue’s FL application failed.

In 1908 they were elected to the Football League Second Division and won promoted to the First Division in 1914. They finished ninth in their debut season in the top flight, the club’s highest ever league position.
From 1921 Bradford suffered consecutive relegations down to Third Division North, but won promotion back to the Second Division as champions in 1928. The club were relegated again in 1950, and then placed in the Fourth Division after the re-construction of the Football League in 1958. There was more promotion and relegation campaigns in the 1960’s, but after several years of struggle, they were voted out of the Football League and replaced by Cambridge United in 1970.
The club ended up in the Northern Premier League, their financial plight resulted in the sale of the Park Avenue ground and having to share with Bradford City at Valley Parade in 1973. The club went into liquidation in May 1974 with heavy debts, but immediately re-formed as a Sunday league club playing in the former club colours.

The Sunday league side played at Bingley Road and Hope Avenue in 1974, before shifting to Avenue Road from 1975. Meanwhile all the stands and other buildings at Park Avenue were demolished in 1980, with only the playing field and terraces remaining. The rundown stadium was made available for amateur football in the mid-1980s, with the Sunday team playing a full season at their spiritual home in 1987–88, before being forced out to allow an indoor cricket school to be built on part of the land. 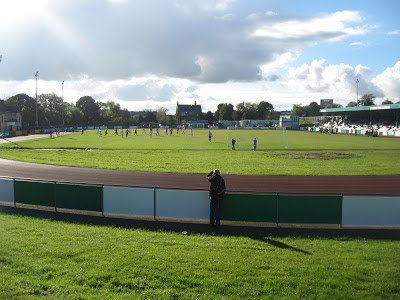 The new Bradford Park Avenue FC formed for the 1988–89 season, when they joined the West Riding County Amateur Football League. The club progressed to the Central Midlands League, then the North West Counties, playing matches at various rugby league grounds in the area until moving to the Horsfall Athletics Stadium in 1995, when they won the North West Counties League.
The club took the Northern Premier League Division One title in 2000-01 and became founder members of the Conference North in 2004. Since then they’ve been relegated twice, but have returned after achieving a second promotion last season after beating F.C. United of Manchester 1–0 in the playoff final.

I spend the afternoon with Squad#155 James Little who had travelled down from Edinburgh for the game. As well as bagging new football grounds, James also collects football clubs and he is currently in pursuit of viewing all post-war clubs that have ever appeared in the Football League. He told me last season that he would try and catch Bradford Park Avenue at Blyth Spartans, but I put him off that idea and encouraged him to join me on a day out at the Horsfall Stadium.

I arrived in Bradford Interchange at 1.30pm and met James for a couple of pre-match bevvys in the JDW Turls Green pub in the Centenary Square. I was quite impressed with Bradford as a city but I have to say that the local transport is crap. The club website advertises a free bus to drop you off near the ground, but no such thing arrived in the half an hour we stood at the bus concourse. Instead we intended to catch the 2.20pm 681 service, which arrived over a quarter of an hour late, meaning we got to the ground just in time to hear the referee blow his whistle to start proceedings. 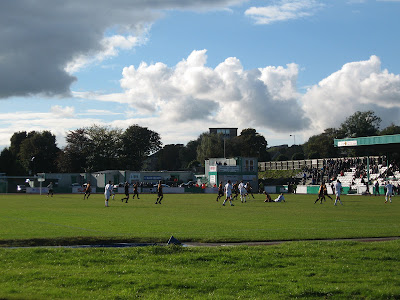 The ground is approximately 2.5 miles south-west of the city centre (15 minutes on the bus) and is also currently home to Bradford Airedale Athletics Club and Albion Sports. It was originally built as a running track in 1931, before being upgraded for football with Park Avenue’s arrival, with major improvements and building work in 2007.

The 5,000 capacity stadium is found at the bottom of Cemetery Road, where on entering the ground you find all the amenities; clubhouse, toilets, snack bar and an excellent club shop. If you haven’t visited the Horsfall try and arrive early, as the club shop has a huge range of programmes and football memorabilia for sale.
The main stand is named the Ronnie Bottomley Stand, having 1,247 white seats with the club initials picked out in green which came courtesy of the Lord's Cricket Ground. Although the ground has a running track, the view from the stand isn’t too far from the action, as there are only six lanes which are tight between the pitch and stand. The stand has a green roof and supporting pillars with terraces flanking both sides. The team dugouts are in front of the stand with the changing room building at the opposite side, which also has an upstairs press room.
The rest of the ground is hard standing with binocular views behind each goal and is nicely finished off with a perimeter wall in the club colours, which adds that extra bit polish to the stadium. The record gate is 2,100 for an FA Cup first round tie against Bristol City in 2003. 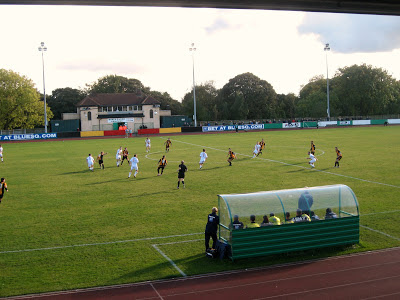 Bradford were up against Gloucester City (The Tigers in Conference NORTH – ridiculous!...Eddy) looking to make it four wins in a row. After making a positive start, they deservedly took the lead in the ninth minute. Paul Walker, looking suspiciously offside, ran on to a sublime through ball from Alex Davidson, who kept his cool to fire home under the ‘keeper’s body.
The visitors could have been dead and buried, but showed great spirit to get back into the game. On the half hour mark they equalised after a mad scramble and a comedy of errors in the goalmouth, allowed Darren Edwards to poke the ball home, and then a minute later they should have been ahead. The Avenue failed to deal with a long punt up field, resulting in a clumsy challenge just inside the box from Hotte, and from the spot-kick former Heed goalie Tim Deasy got down to deny Edwards a quickie brace.
The match was an open entertaining affair which could have gone either way in the second half, but it was the hosts who clinched the three points on 71 minutes, when a through ball from Holland found Richard Marshall, who should some neat play to turn the defender and fire home from the edge of the box.

After the match we jogged up the hill to catch the 681 bus back to the town, which was only five minutes late this time, but much quicker on its return, back in the city centre for ten past the hour. This gave us ample time to visit the other ‘Spoons pub, the strikingly impressive Sir Titus Salt before I caught the 1750 to Leeds on route home.
This season I’ve managed to attend a game every Saturday at a new ground, stretching back 14 weeks from the 14th July, sadly this run had to come to an end sometime and this enjoyable day out in west Yorkshire is my last new’un for a couple of weeks, giving me plentiful time to charge up the laptop and the camera batteries before I’m on my travels again.