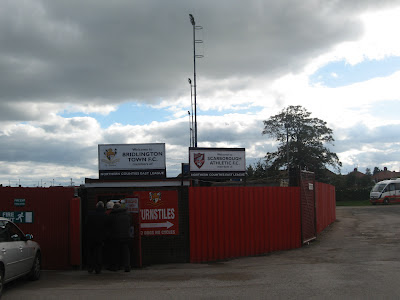 A weekend family break in Filey included a pleasant Saturday afternoon in Bridlington; a seaside resort and minor sea fishing port in east Yorkshire on the Holderness Coast of the North Sea.


The town’s origins can be traced back to ancient times. The nearby Dane's Dyke dates back to the Bronze Age and it’s believed that Bridlington was the site of a Roman station in around 400AD.
Bridlington is recorded in the Domesday Book as Brellington, Britlington and Bretlington and the name Burlington was used up until the 19th Century. Back in its heyday Brid was a top entertainment resort, being the home of the famous dance venue ‘The Spa’ where many famous entertainers have appeared throughout the years. 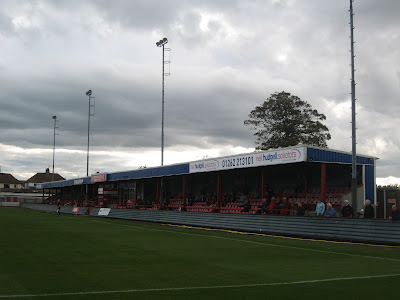 The original Bridlington club was founded in 1918 as Bridlington Central United, joining the Driffield and District Minor League, before progressing to the East Riding Amateur League. The club were league championships five seasons running during the 1950s before moving to the Yorkshire League Division Two in 1959-60 and also changing their name to Bridlington Town.
The club gained promotion in their debut season and won the Division One title in 1966-67, piping derby rivals Bridlington Trinity in the process, although their fellow Bridlington club gained revenge the following season.
In 1982 they were founder members of the Northern Counties East League after the merger of the Yorkshire and Midland Leagues, placed in Division One, then after four seasons they were handed promotion to the NCEL Premier Division after several clubs resigned.

The 1989–90 season was a memorable one; league champions and a Wembley trip in the FA Vase, but unfortunately they couldn’t achieve the double, the final tie with Yeading ended goalless with Brid losing out 1-0 in the replay at Elland Road.
Town progressed to the Northern Premier League Division One, winning the title in the 1992–93 and finally achieved success in the FA Vase. I remember this Vase victory well, as at the time I worked with Graeme Jones, who proudly brought his winners medal into work, being part of the team that beat Tiverton Town 1–0 at Wembley. 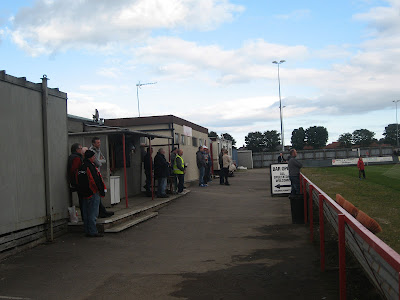 The Vase triumph turned out to be the club’s swansong as within two years they were no more.  A dispute involving the ground leaseholder and the council saw the team playing home matches 60 miles away at Doncaster Rovers' Belle Vue.  In 1993-94 they finished 21st in the Unibond Premier Division and were also deducted three points, instead of taking relegation the club decided to call it a day.
The club were reborn in September 1994, thanks to a pub team. The Greyhound were looking for a home pitch and approached the lease-holders at Queensgate. An agreement was made for the team to use the ground on the condition that the team change their name to Bridlington Town AFC, in effect bringing the old club back to the town.
History repeated itself as the new club started life in the Driffield and District League, and as before, progressed to the Northern Counties East League Division One. Town won promotion in 2001–02 and won the Premier Division the following season, also achieving a second championship in 2009-10. 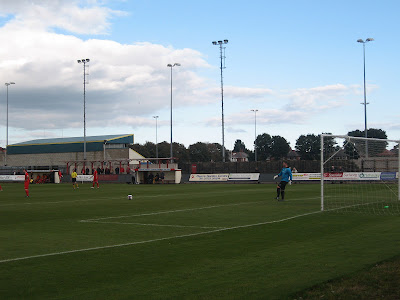 Queensgate has been in use since before the Second World War, originally having a wooden stand which stood until the 1980’s, condemned in wake of the Bradford fire. The ground was shared with Bridlington Trinity until a dispute over unpaid rent saw the club banned from playing at home, with the club eventually folding in 1990.
The ground had a major overhaul when Ken Richardson joined the club as President, helping finance the redevelopment in 1986 which saw a new stand, clubhouse, turnstiles and floodlights.
The Main Stand runs nearly pitch length, housing the changing rooms, PA box and six rows of 500 red seats with a standing section at one side. The stand also has specific seating for both home and away directors with their own private boxes each side of the tunnel.
The turnstiles are in the corner of the ground beside The Seasiders clubhouse, behind this goal is a club shop hut, snack bar and further access to the clubhouse. The far end goal is an open terrace with cover at one side between the six yard line and the corner flag. The terrace has a large banner directly behind the goal with the club name and crest.
The dugouts are opposite the Main Stand which is largely open apart from a covered two step terrace in between the dugouts known as The Bus Shelter. Duke Park the home of the local rugby club is directly next door and during the game a giant egg-type-thing appeared on the pitch in the second half.
Queensgate is currently shared with Scarborough Athletic and has a capacity of 3,000, with a record gate of 2,102 for an FA Cup tie with neighbours Scarborough in the 1960’s. 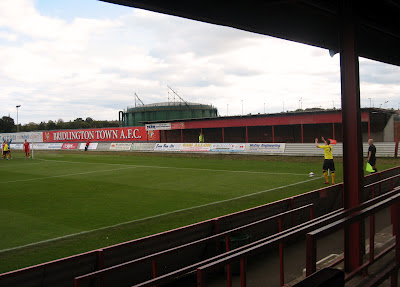 Bridlington made it ten wins on the bonk and maintained top spot in the NCEL Premier Division with a narrow win over Maltby Main. After scoring 16 goals in the last three games I was expecting a Seasiders goal fest, but the visitors more than matched the leaders throughout, as both teams created numerous chances in an enjoyable game played in good spirit.

The game was settled in the 75th minute when Chris Bachelor got on the end of a left wing cross to head home from ten yards, and the hosts deserved it on the balance of play, as I nominated Maltby ‘keeper Liam Copley as my man of the match after pulling off a selection of cracking saves.
The match was made more entertaining as throughout the whole ninety minutes there weren't any injuries; both physios remaining on the bench with no need for the cold buckets of water, which is something I can’t recollect ever seeing throughout my long football observing career. 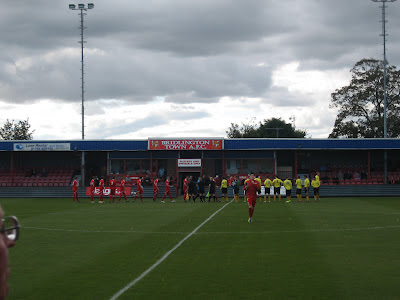 As I've mentioned this matchday was part of a weekend break in nearby Filey, staying at the Blue Dolphin caravan park, situated on the coast just off the A165 Scarborough to Bridlington road.
The weekend turned out to be quite a bizarre affair, for starters a straightforward Friday evening 93 mile drive turned out to be (without boring you with the details) three and a half hours of hell and one of the most stressful I’ve experienced behind the wheel of a car.
When we finally arrived, I found the resort swarmed with rockers and teddy boys, as the park was hosting a rock ‘n’ roll convention over the whole weekend. There were hundreds of men and women dolled up in 50’s gear, having travelled from all four corners of the UK to a caravan park just outside Filey, put it this way - there was more ducks arses on show than Saltwell Park lake!
Things went from one extreme to the other, when in the other showbar we were presented with a special treat; doing the gig on the main stage was bubbly 80’s scouse pop sensation and product of those Stock, Aitken and Waterman bastards (spit!!!....Eddy) – the one and only Sonia! She did an hour of other peoples hits before the much anticipated “You’ll Never Stop Me Loving You” (her number 1 hit in June 1989) towards the end of her set. Good job there was a supply of Wychwood Hobgoblin to be had, which I supped plenty of, mainly for medicinal purposes to soothe the pain in my eardrums.
Also on the following night I witnessed a surreal experience and a new phenomenon called ‘The Silent Disco’ which is dancing to music played via headphones. The sight of people dancing to silence isn’t a pretty sight and made doubly worse with everyone singing along way out of tune.
So a weekend complete with greasers, Showaddywaddy lookalikes, wee ginger pop stars and a drafty caravan, made up an enjoyable break in a lovely part of the world. The usual 90 minutes of football and visiting a couple of Wetherspoons pubs, being the only shread of normality over the whole holiday.