Around The Alliance - part seven 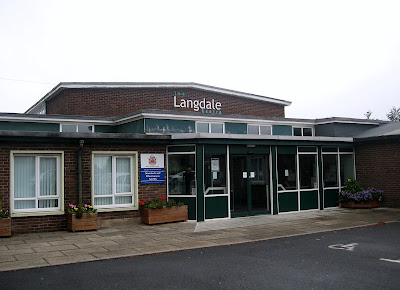 The first game in this series took me over to Wallsend in North Tyneside, situated 3.5 miles east of Newcastle City Centre. The area takes its name as the location at the end of Hadrian's Wall, where the Segedunum fort protected the eastern end of the wall.
Wallsend’s main history is in shipbuilding and was the home of the Wigham Richardson shipyard, which later amalgamated to form Swan Hunter & Wigham Richardson, probably best known for building the RMS Mauretania. 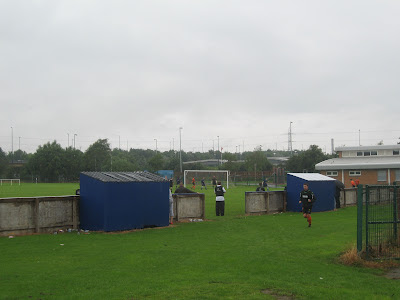 Wallsend first played competitively in the Wearside League from 1973, winning the league title in 1978-79, before joining the Northern Alliance for five years from 1981.
They re-joined the Wearside League in the newly reformed Division Two in 1998-99, before again return to the Alliance two years later. Over the last two seasons the club has achieved back-to-back promotions from Division Two up to the Premier Division 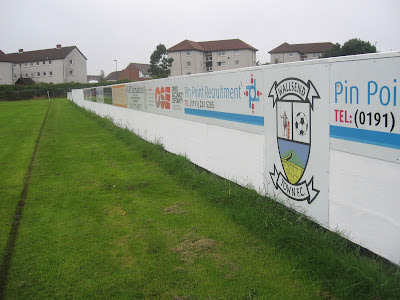 The Langdale Centre is found just off the Coast Road, the ground fully railed off with dugouts and the changing rooms inside the main building.
The first piece of action of the day came off the pitch, when a couple turned up to support Wallsend’s opponents Stocksfield. Having just missed the kick off, the two of them walked behind me to take their position along from the dugouts when suddenly the gentleman disappeared! There was a manhole with a dodgy cover, so he collapsed and fell through the gap. I helped him back onto his feet and apart from a clarty pair of jeans he was ok. I then got some training cones off the Wallsend bench to put around the potential death trap. 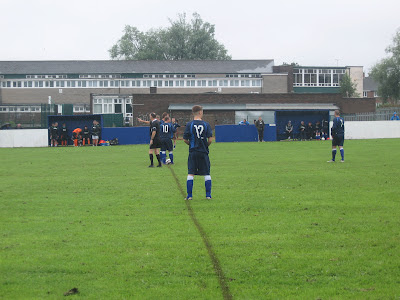 Stocksfield made an energetic start to the game, taking an eighth minute lead with a lovely edge of the box chip from Ben Dibb-Fueller. The visitors missed a host of good chances until eventually doubled their advantage on 34 minutes, when a corner kick fell to Declan Stokle, who picked his spot with a side footed effort from the edge of the box.
The visitors should have been home and dry by half time but Wallsend got back into the game just before the break with a nice finish from Steve Matthews, firing his shot into the roof of the net.

Wallsend’s effort to get an equaliser was more by bully boy technique rather than hard work and skill. The card shy referee seemed to let them get away with murder, with the Stocksfield cockney-gaffer insisting on bringing video equipment in future matches to be used as evidence against discourteous foul play. Stocksfield finally sealed the win which their overall display deserved with a glanced header from Chris Hall, as the frustration from Wallsend festered; with at last the sight of a card from the refs pocket. Five minutes from time Matthews saw red for abusive language towards the linesman for disallowing which would have been his second goal, after a foul in the build-up to the goal. On the final whistle the Wallsend players trooped off the pitch as if they’d been robbed but they had no right to feel aggrieved, they were simply beating by a better side. 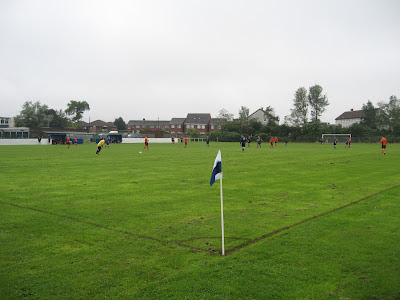 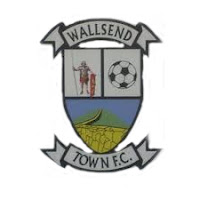 
For a better quality piece on football in Wallsend read Squad#119 Michael Hudson's report on his visit to Langdale the previous week, on his blog - The Accidental Groundhopper 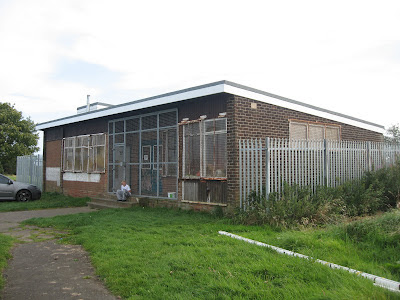 The second match took me up the Northumberland coast to the seaport town of Amble. The town lies at the mouth of the River Coquet and is known as ‘The Friendliest Port'. This derives from the 1930s when upon the last voyage of RMS Mauretania to the breaker's yard at Rosyth, the ship replied to a telegram from the Amble town council with the greeting "to the last and friendliest port in England". 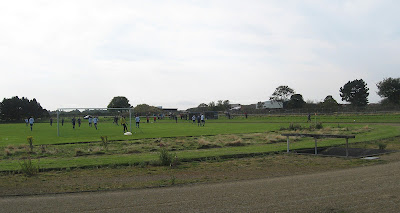 Amble United formed after the merger of Amble Town and Amble Vikings in 2001. The club played in the Northern Alliance for two seasons, switching to the North Northumberland League until returning in 2007-08. The following season they were Division Two champions and the Division One trophy now resides in the trophy cabinet, after clinching the title ahead of Wallsend last season. 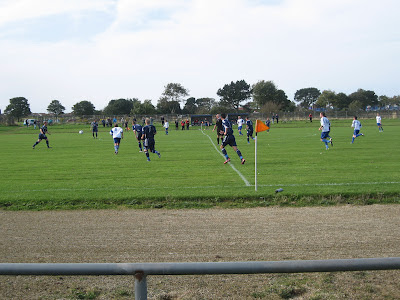 Amble Welfare is found on the edge of the town centre on Acklington Road, in the grounds of Coquet High School. The ground itself isn’t sign posted, at the entrance off the main road there’s a skateboard park, with the pitch and dressing rooms set further back down a dirt track roadway. The pitch is fenced off around an old running track with brick team dugouts at the nearside. The rough looking changing rooms are about 100 yards away from the pitch. 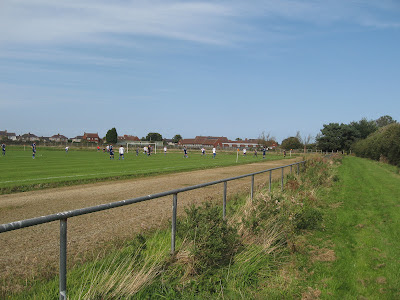 The game between Amble United and Seaton Deleval Amateurs was close to becoming a personal football first, as for long periods it looked as if I was about to witness my first ever goalless draw in the Northern Alliance.
Both teams huffed and puffed in search of breaking the deadlock but it wasn’t until the dismissal of Amble’s Matthew Graham after 54 minutes that the game sprung into life. The offender was slide tackled by the Deleval number 7 and whilst both players we lying on the ground, he appeared to punch his opponent in the back of the head. The linesman was close enough to see the incident and alerted the referee as to what happened, who in turn didn’t hesitate in producing a red card.
Amble seemed to get a spurt on once they went down to ten men, pushing men forward as if they were the ones with the numerical advantage. On 74 minutes their bravado was rewarded, when Sean Taylor got on the end of a fine left wing cross to nod home from ten yards.
Deleval pushed for an equaliser, with Amble soaking up the late pressure and trying to catch the visitors on the break, then deep into injury time Adam Shanks took advantage of a mix up between the keeper and defender to nip in between both and lob the keeper into the empty net, to round off a good shift by United’s ten men. 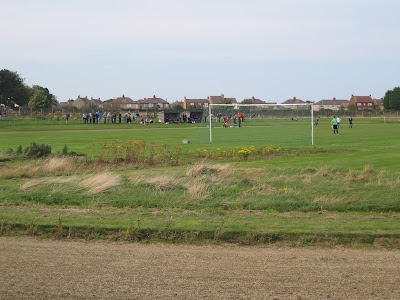 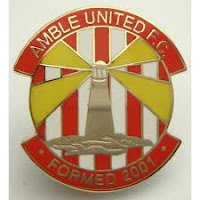 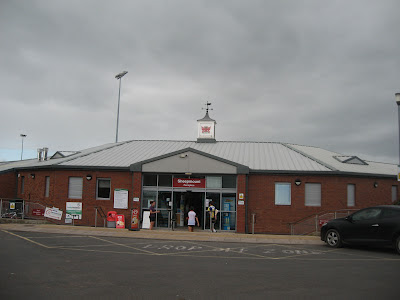 For the final game in this episode of ‘Around the Alliance’ I boarded the Northern Rail rattler and headed west through the Tyne Valley to the Border City of Carlisle.
Carlisle is the largest settlement in Cumbria, located at the confluence of the rivers Eden, Caldew and Petteril, 10 miles south of the Scottish border. The town is historically part of Cumberland and is the place where I famously met Ed Tenpole from the band Tenpole Tudor outside the rail station, after he had played a gig in Glasgow and I was out on the lash! 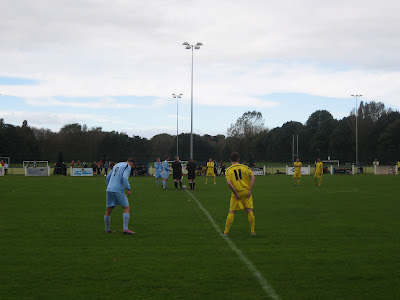 Carlisle City played at The Sheepmount which is a nice scenic 20 minute stroll from the town centre, along the West Wall next to the Cathedral, then through Devonshire Walk by the castle.


The Sheepmount Athletics Stadium was redeveloped in 2006 after a £3.6 million project funded by Sport England and the Football Foundation. The complex is home to a variety of sports organisations including 17 football clubs, 2 athletics clubs, with hockey and indoor rifle shooting, and also plays host to a variety of major sporting events and school activities
The athletics stadium has an 8-lane track and within the Sheepmount there’s junior and mini grass football pitches, an astro surface, gym and function room and of course full size football pitches, one of which is used by Carlisle City, being fully fenced off with brick dugouts and separate changing rooms. 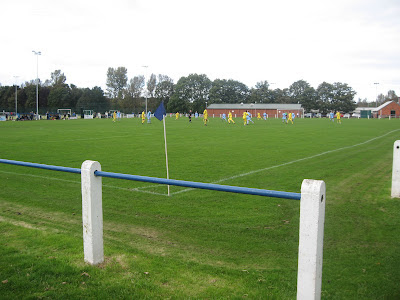 The club formed in 1975 by two ex-Carlisle United players; George Walker and Ron ‘Ginger’ Thompson. In 1976 a reserve side was formed, followed by a third senior team in 1977. The Club maintained three teams before setting up a junior section in 1990.
The Sky Blues have played in the Northern Alliance since their formation and within the Premier Division since winning the Division One title in 1991-92. In 2002-03 they finished runners-up to Newcastle Benfield Saints and have won the Challenge Cup on six occasions. 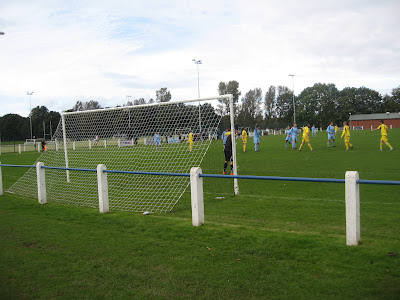 Carlisle City fresh from a 17-0 home win over Penrith Saints last week in the County Cup, were back on Alliance duty against Whitley Bay A, showing great spirit to come back from a two goal deficit to win 3-2.
Whitley took a strong foothold in the game early on with two goals in the space of a few minutes from Andy Robinson. The first arrived on 13 minutes when the number nine got on the end of a free kick from the right to nod home from close range, then minutes later a cross shot looked to be going wide until he appeared at the far post to fire home.
City found themselves two down even though on the overall balance of play they were the better side, but somehow got themselves back into the game with a 30 yard daisy cutter from Greenslide, his effort somehow evading everyone and ended up in the back of the net.
The hosts built on that goal in the second half with a sweet 20 yard strike from Seggie, drawing them level on 55 minutes and wrapped up a great come back in the 82nd minute when a cross from the left found the goalkeeper flapping, allowing Sean Bannon to steer the ball into the net from a tight angle.

Another cracking Alliance game and a good day out, the usual 2.30pm kick off gave me an hour to visit some of my favourite pubs in the town centre before catching the 1728 back to Newcastle - a smashing way to wrap up episode seven of ‘Around the Alliance’. 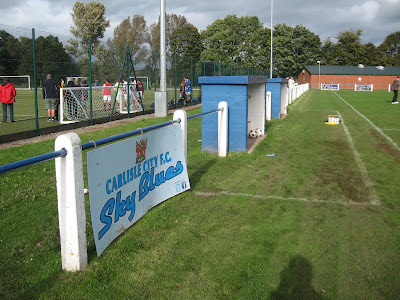