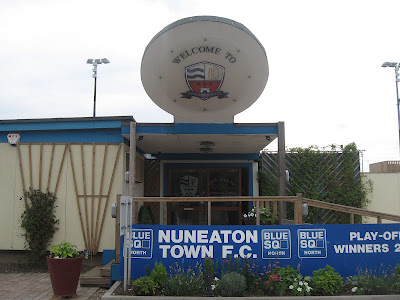 Last season I was left just one short of completing the Blue Sq. Bet Premier League grounds. This term there’s also three promoted sides to visit, the first of which is Conference North play off winners Nuneaton Town.

Nuneaton is the largest town in the Borough of Nuneaton & Bedworth in Warwickshire, most famed for its associations with the author George Eliot, who was born just outside the town in 1819.
The name Nuneaton comes from a 12th century Benedictine nunnery, prior to this it was a settlement known as 'Etone', which translates literally as 'water-town'.
Nuneaton was listed in the Domesday Book as a small hamlet and a market was established in 1233. The first recorded use of the town name was in 1247 when a document recorded it as 'Nonne Eton'.
After Henry VIII's Dissolution of the Monasteries, the Nunnery fell into disrepair and from 1552 the remains were incorporated into an Anglican Church building.
The town came to prominence from the 17th century due to its central position amongst the Warwickshire coal mines and by the turn of the 19th century became one of the largest towns in the county with a population of 5,000. During the Industrial Revolution, Nuneaton developed a large textile industry, plus advances in brick, tile making and brewing. 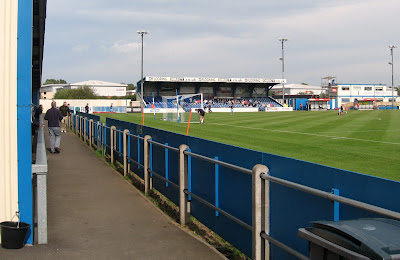 Nuneaton St. Nicholas formed out of a parish church in 1889, changing their name to Nuneaton Town five years later. The club played in the Leicestershire League and from 1919 in the Birmingham & District League, before disbanded in 1937.
Nuneaton Borough formed in 1939 and later became an established Southern League club, plus one of the founder members of the Alliance Premier League (Conference) in 1979. The Boro finished league runners-up in the Alliance over two successive years from 1983, but were relegated back to the Southern League in 1987. After a second successive relegation, financial troubles saw a new board of directors take over, becoming Nuneaton Borough A.F.C in 1991.

The club had a second spell in the Conference after winning the Southern League Premier Division in 1998-99, but again suffered relegation and whilst in the Conference North Division, financial irregularities forced the club into administration in May 2008.
On 2nd June Nuneaton Borough A.F.C went in to liquidation and reformed as Nuneaton Town F.C., with the FA insisted that as well as the club being renamed, they must also be relegated two divisions to the Southern League Division One Midlands.
The Boro are back in the Conference only four seasons since their reformation, completing a hat-trick of promotions all achieved via the play-offs. 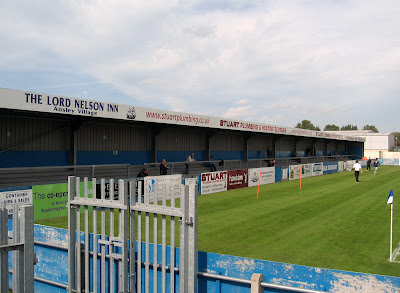 Nuneaton moved from Manor Park in 2007, having played at their former home since the end of World War I, the ground recording a record gate of 22,114 for an FA Cup tie against Rotherham United in 1967.
The club share the stadium with original residence Nuneaton Rugby F.C., the first footy match played on 17th July 2007 against Coventry City in a 2–2 draw.
The Flooring Direct Main Stand opened for the 2010-11 season. The stand sits at one side of the half-way line, fully covered with 514 seats with a floodlight pylon at either side. This side of the ground also has the team dugouts, changing rooms block, club offices, hospitality area, TV gantry and most important of all the impressive Boro Bar.
Opposite is an open terrace in front of the Rugby Clubhouse, which is split into separate sections with four floodlight pylons situated in front and refreshment bars in each corner, one of which has a connecting wall clock.
There are covered terraces behind each goal. The Britannia Tyres Stand has a capacity of 1,800 which is larger than the Stuarts Plumbing Stand opposite.
Liberty Way is currently known as the Triton Showers Community Arena and has an overall capacity of 4,314. 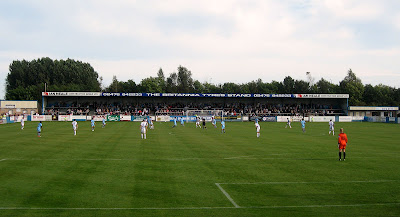 Gateshead maintained their unbeaten start to the season with a well-earned three points at Liberty Way.
The decisive goal came on 63 minutes through Yemi Odubade, who latched onto Phil Turnbull's pass before firing home from six yards.
The Heed looked to have taken a first half lead when a Gillies free kick was nodded in by Hatch, only to be chalked off by the referee, then just before the break, good work by Chandler set up a golden chance for Gillies, who fired just wide.
Gateshead’s nasty habit of conceding late goals almost struck again when Andy Brown’s close-range effort struck the top of the crossbar, but the Tynesiders managed to see out the seven minutes of stoppage time for a well-deserved victory. 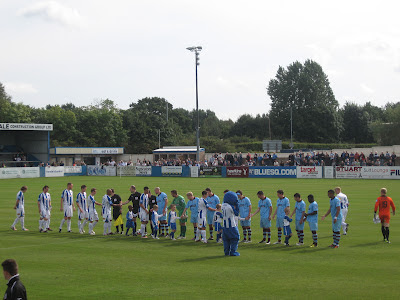 I enjoyed my visit to Liberty Way and found Nuneaton a very friendly club and I’m pleased to report that the feeling was mutual. Gateshead chairman Graham Wood posted on Heedforums last night to let the supporters know that the Nuneaton Town Safety Officer made a special point of coming into the board room after the game to compliment the club’s supporters. The officer said that whilst we were very loud, we were also the friendliest and best behaved away fans they'd EVER had at their stadium and I echo Graham’s summation; A very nice gesture and pleasing to hear. Well done to all concerned. 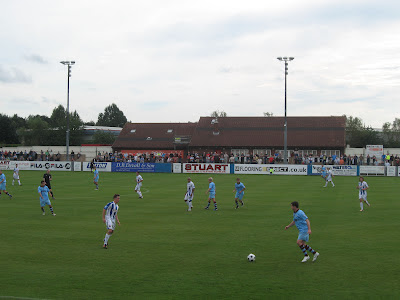