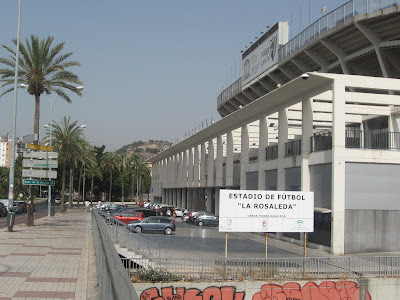 The second part of My Match Holidays was in Málaga, which  is a city and a municipality in the Autonomous Community of Andalusia on the Costa del Sol and the southernmost largest city in Europe.
The Costa del Sol (Coast of the Sun) is found in southern Spain on the northern side of the Mediterranean Sea, the southernmost point of continental Europe and approximately 130km north of Africa.
Málaga's is one of the world’s oldest cities with a history spanning over 2,800 years, originally founded by the Phoenicians as Malaka in 770 BC, then from the 6th century BC under the dominion of Ancient Carthage. From 218 BC it was ruled by the Roman Republic and later the Roman Empire as Malaca (Latin), then after the fall of the empire came under Islamic Arab control as Mālaqah for 800 years.
In 1487 the city finally came under the realm of the Spaniards in the Reconquista. The archaeological remains and monuments from the Phoenician, Roman, Arabic and Christian eras make this historic city centre an "open museum", displaying its rich history of more than 3,000 years.

As much as I like to explore previously uncharted cities, the artistic heritage of the birthplace of Pablo Picasso wasn’t the purpose for my visit. The only reason me and my son James took the 35 minute train ride along the coast from Arroyo de la Miel was for the XXIX Trofeo Costa del Sol. 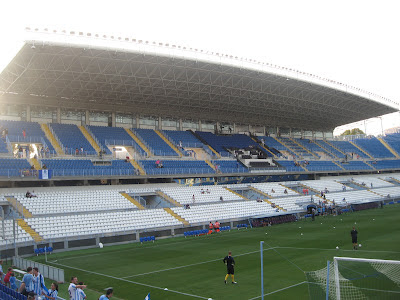 Málaga organised its own summer tournament between 1961 and 1983, the former CD Málaga won this competition on three occasions, beating Real Madrid, Red Star Belgrade and Derby County in the finals. After a long time of inactivity from 1983 the competition was revived after a twenty years gap. Since then Málaga CF has won the competition on three times, beating Newcastle United, Real Betis and Parma FC. The six trophies are currently placed together in the Málaga CF display cabinet.

Although there was an original Málaga football club in 1904, it wasn’t until the merger of the areas two biggest clubs; Malagueño FC and Málaga Sport Club that football came to prominence in the city. The clubs formed Club Deportivo Malacitano in 1933 and were elected to the Spanish Second Division from the 1934-35 season
The club was renamed Club Deportivo Málaga in September 1941 and formed a reserve club in 1948, taking over junior side CD Santo Tomás, who were renamed Club Atlético Malagueño, reviving the club’s original name. Throughout their history they were the definitive yo-yo club, involved in a record eleven relegation and promotion campaigns, spending a total of 20 years in La Liga. The clubs most successful period came in the early 1970s with two seventh place finishes in a 5 year stint in the top division. 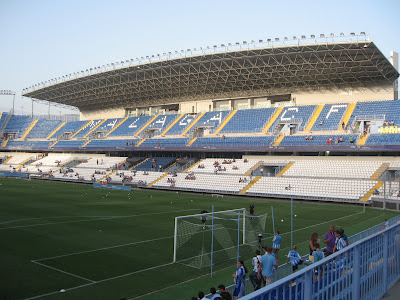 In 1992 after financial troubles CD Málaga went into liquidation, although the reserve side continued, playing the 1992-93 season in Tercera División Group 9. Two years later after winning promotion followed by another relegation campaign, they too faced financial problems and looked set to seal the same fate as their parent club.
A referendum by the club's members in December 1993 resulted in favour of a name change and so in June 1994 CA Malagueño were renamed Málaga Club de Fútbol S.A.D., becoming the official heir to what was previously called Club Deportivo Málaga

The club moved to Stadio La Rosaleda (The Rose Garden) from the Baños del Carmen, used for the first time on 13th April 1941 for a fixture between the CD Malacitano and AD Ferroviaria. The official opening took place on 14th September 1941, with a friendly match against Sevilla, when the club premiered their new name of CD Malaga.


The Rosaleda was one of the seventeen host stadiums for the 1982 FIFA World Cup, hosting three matches and is currently owned in three equal shares by the municipality of Málaga, the Málaga Provincial Council and the Government of Andalusia.
The 28,963 capacity stadium was revamped over a six-year period from 2000, designed in a joint venture by architects José Segui Pérez and Sando-Vera. The stadium reflects on itself at each end, at each side is a two tier grandstand decked out in blue and white flip seats. One of the stands has Malaga CF lettering picked out in white opposite the main stand which has the tunnel and dugouts. Both stands are partially covered with the roof rising, so if the rain in Spain doesn’t fall mainly on the plane, the supporters in the bottom tier will more than likely get drenched! Behind each goal there’s open two tier stands which wrap ‘round to meet the grandstands, both have electric scoreboards at the top, parallel with the goal. There is also a medical centre and clinic underneath the goal stand. 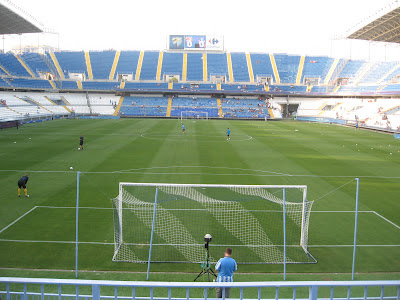 The current club progressed through the Spanish leagues and have played nine seasons in La Liga reaching their peak last season when finishing fourth and winning a crack at this season’s Champions League qualifiers. The club was sold in June 2010 to Qatari investor (*deep breathe*) Abdullah bin Nasser bin Abdullah Al Ahmed Al Thani, who bought the club shares from Lorenzo Sanz.

After spending over 150m euros on big money players, it now appears that Al Thani basically can’t be arsed with the club anymore. Over the last few months no club payments or players wages were paid and the sale of star players Rondón and Cazorla, sees the club perilously looking in the opposite direction unless new financial investment can be found, undoing the great progress made in recent years.

Although we both enjoyed the occasion and loved the stadium the match itself against Everton was a poor affair, as both defences bossed the game with numerous offside decisions, typified when Jelavic had a header ruled off which would have put the Toffeemen a goal up on the hour mark.
Malaga had most of the attacking flair but there was too much tippy-toe style football around the box, with no one wanting to take the responsibility of having a dig at goal. However the decisive goal duly arrived on 73 minutes. Joachim received the ball wide on the right and made a pacey run towards the penalty area before being tripped on the edge of the box. From the resulting free kick Weligton was unmarked with plenty of room for the big Brazilian to head the ball past Howard into the top corner of the net. 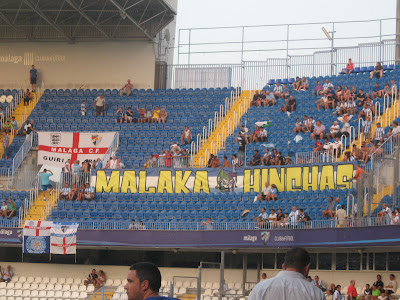 I wasn’t looking forward to the long slog towards the city centre in search of a taxi after the game, so we were chuffed to find taxis lined up outside the main entrance to the stadium. We headed to the Benalmadena costa to meet the breadknife and my favourite daughter in the Bus Stop pub, which became our favourite boozer in this resort. Due to the large amount of Brits living on the Costa del Sol, Malaga has a sizeable British following known as the Guiri Army and I spoke the a proud member of this organisation in the bar afterwards. The word “Guiri” is actually a Spanish slang word for tourists and a stereotypical guiri is; a sunburned, fair-haired and skinned English-speaking white person wearing shorts, socks, sandals, sunglasses and with a camera in full view and as much as I would like to give Malaga my full support, I’m afraid I  only have five of those nine traits so I don’t qualify as a member of this fine body of soldiers. 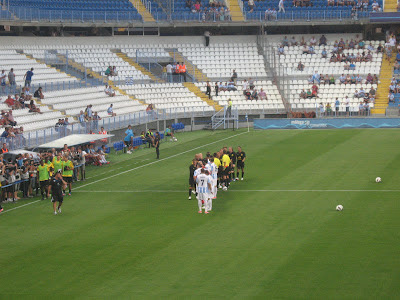 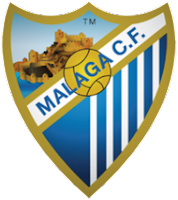