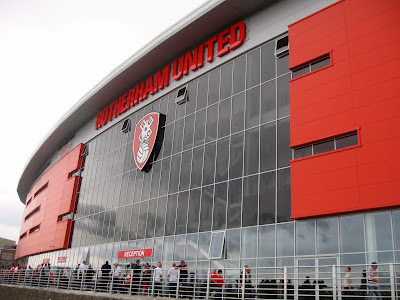 When the obsessive and lifetime pursuit of visiting the grounds of the top 92 ranked clubs in England and Wales was finally achieved last season, there was no way I was going to allow the “I’ve done the 92” bragging crown slip off so soon.
So with one new addition to the collection to add this season, I made sure I got it ticked off as quickly as possible, attending the first competitive fixture at Rotherham United’s New York Stadium.
I’ve been to Rotherham a few times in the past, watching NUFC at Millmoor in the 1980s, but this occasion was my first “proper” visit to the South Yorkshire town i.e. on the lash/pub crawl.

Rotherham was historically part of the West Riding of Yorkshire which lies on the River Don, at its confluence with the River Rother between Sheffield and Doncaster.
There was an Iron Age and Roman settlement in the area, but it wasn’t until the early Middle Ages that Rotherham was founded; establishing itself as a key Saxon market town and later in this period became the centre of a large parish on both sides of the River Don 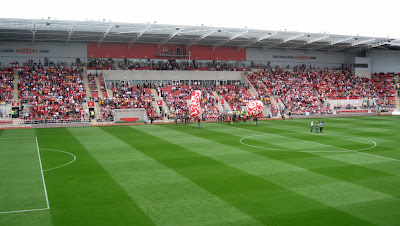 Rotherham United originally planned to move away from Millmoor and build a new stadium in May 2008, after a disagreement with ground owner Ken Booth. The Millers took up temporary lodgings at the Don Valley Stadium in Sheffield and purchased land for a new community based stadium in January 2010.
The club chose the site of the former Guest and Chrimes Foundry, the steelworks made water taps which they improved and adapted to use on fire extinguishers.
The ground was named 'New York Stadium' as this area of the town is locally referred to as 'New York' and was chosen ahead of 'The Foundry' and 'The Waterfront Stadium'. The club hope that this unique name could bring potential investment from New York, New York in the U.S. of A.
Planning permission was granted in November 2010 with construction starting in June the following year, designed by S & P Architect’s and built by Gleeds and GMI Construction at a cost of £20m. 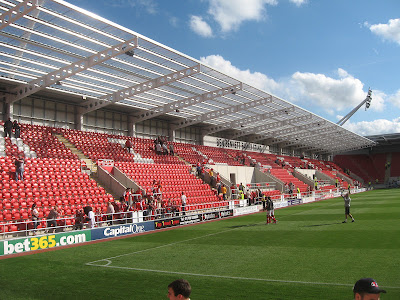 The stadium is built in the shadows of Millmoor, located on the opposite side of the rail line. I was really impressed with the NY Stadium, steep banks of seating and no empty space in the corners; give the ground a nice compact homely vibe. The stadium has a capacity of 12,009 decked out in club colours of red seats with The Millers and RUFC picked out in white.
The main stand on the west side of the stadium is known as the Eric Twigg Foods. The stand has a central shelf with executive boxes, and houses the TV gantry with large dugouts at each side of the tunnel.
Behind the north goal is the KCM Recycling Stand which is the new kop style singing end holding 2000 home fans and opposite the away end known as the Morrison Stand. The only difference between the two ends is the electric scoreboard on the south side with both sides having a staggered step style roof.
I sat on the east side of the stadium in the family stand, named the Ben Bennett Stand with a capacity of 4000 which also has specialised disabled access.
The Millers have played three warm up games prior to this first competitive match. The first game was against Barnsley on 21th July, Barnsley’s Jacob Mellis scored the first ever goal at the stadium but United came back to win 2-1. This was followed by friendly fixtures with Sheffield United and Hearts.

Rotherham United maintained their billing as promotion favourites by christened the new ground with a comfortable win over Burton Albion.
The Millers were 2-0 up after only 11 minutes, boosted by the carnival atmosphere generated by the home support. Nardiello scored from the spot after a trip on Zander Diamond before strike partner Odejayi nodded home to double the advantage.
Burton looked dangerous on the break but blew their chance of getting back into the game when Lee Bell was sent off after two quick yellow cards, the second a reckless tackle which reduced the visitors to ten men.
Ben Pringle’s crisp shot took a wicked deflection to loop over keeper Ross Atkins which made it 3-0, to but the gloss on an excellent start to the Millers life at their swanky new home 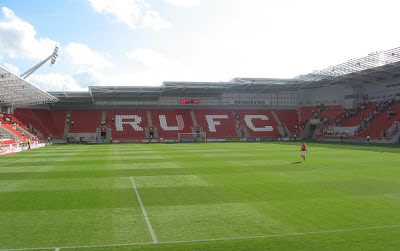 In my previous blog entry I championed East Coast trains on their quality service, but I must have spoken too soon, as on this occasion I was let down on both outward and return journeys. I left Newcastle at the correct time of 959, but a delayed train in front halted my arrival in York meaning I missed the direct train to Rotherham, although I managed to rescue the situation by going via Doncaster, so overall I arrived at my destination only 10 minutes later than the scheduled 1225. My return home was delayed by an hour after someone jumped in front of a train at Alexandra Palace, but overall these hiccups didn’t spoil another excellent day out.

Prior to the match I met up with Squad#88 Graham Precious for a ‘Spoons tour, the Rotherham JDW treble of The Rhinoceros, The Corn Law Rhymer and The Bluecoat. I was also due to do this pub crawl with #108 John Robertson and #194 Keith Arthur, but John rang to let me know they didn’t have tickets and the game was a sell-out, so they were looking for an alternative game elsewhere, although things worked out ok as they got tickets for the away end and I bumped into Keith in Donny station later on.
After the game we had a couple of pints across from the rail station in The Bridge Inn where I had my best pint of the day - Old Mill ‘Bullion’(4.7%)**** and of course a couple of bevvy’s in Doncaster to kill time as I waited for the much delayed 1910 to Newcastle Central.

When I visited the Don Valley in 2008 I mentioned in my report that I hoped Rotherham would resolve their differences with the landlord and return to Millmoor, but in the end things have worked out for the best as The Millers now have a their very own stadium and one to be proud of, the 4-year exile in Sheffield a small sacrifice for such a big reward. 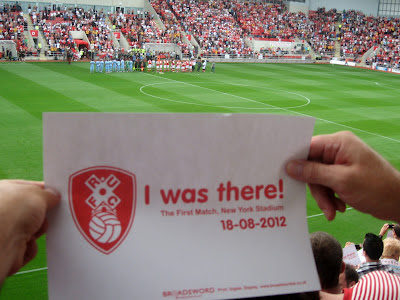 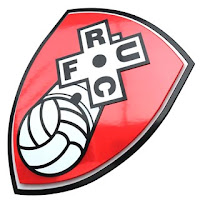