As a regular user of the network formerly known as British Rail, I must say I can’t fault East Coast Trains. So far they’ve never let me down (touch wood) having found their service very reliable as I’ve travelled the length of this isle bagging football grounds. My particular favourite rattler is the 1144 Saturday morning service from Newcastle to Edinburgh. The reason I love this particular too-too, is that it runs non-stop, missing out Morpeth, Berwick and Dunbar, so after going to graft early I can have a nice kip in the quite carriage before arriving in the Scottish capital nicely refreshed by 1.15pm.

On my arrival today I caught the connection train to Dunblane at 1332, where I alighted at Larbert before taking a ten minute stroll along to Ochilview Park for Stenhousemuir’s League Cup first round tie with Brechin City. Stenhousemuir is a town in the Central Lowlands, which lies in the Forth Valley within the Falkirk council area of Scotland. The town is 2 miles north-west of Falkirk and directly borders Larbert in the west.
The village takes its name from "stone house" which was a Roman building on the north of the Carron River Valley known in later centuries as Arthur's O'on (King Arthur's oven) The building was demolished in 1743 so the stone could be used to rebuild a dam on the River Carron. The stones were swept away in a flood but a replica was made in 1763 to serve as a dovecote on the roof of the stable block of Penicuik House in Midlothian and the replacement stone still remains on the site of the original building.
Andrew McCowan arrived in the town as a young lad and established his confectionary business in 1924, manufacturing toffee, fudge, sweets and chews which included the Penny Dainty, Highland Toffee, Bonbons and in the 1980’s the Wham Bar. 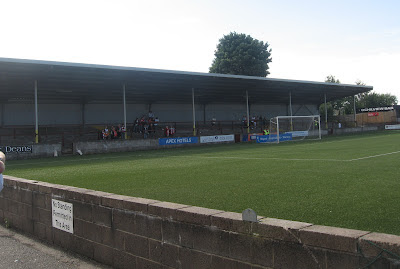 Stenhousemuir FC was founded in 1884 following a break away from local side Heather Rangers, originally playing in the Midland Central League, before moving to the Central Combination League and the Central League. The club enjoyed brief success winning consecutive Scottish Qualifying Cup’s in 1901 and 1902 and the following year reached the Scottish Cup semi-final, losing 4-1 at home to Rangers.

Stenhousemuir moved to Ochilview Park when it opened in 1890 following spells at Tryst Park and Goschen Park. The ground is currently shared with local rivals East Stirlingshire and has also been the temporary home of both Stirling Albion and Falkirk whilst their own stadiums were under construction.
The Ochilview name stems from the nearby Ochil Hills, which can be visibly seen south of the stadium. The Warriors joined the Scottish Football League in 1921 and built a new main stand in 1928 which replaced the original wooden structure which was gutted in a fire. The maroon and white stand was made up of 310 bench seats and was known as the "Doll's House" by the fans.
The biggest gate came in March 1950, when 12,500 fans attended the club's Scottish Cup quarter-final tie against East Fife and the following year Ochilview had the honour of staging the first ever floodlit match in Scotland for a friendly fixture with Hibernian in November.


In the summer of 1964 a certain well known Scottish club revealed plans to get rid of the poorest supported teams within the Scottish Football League. Stenhousemuir, Albion Rovers, Berwick Rangers, Brechin City and Stranraer defeated this proposal with support from a number of clubs which including Celtic, Hamilton and Airdrieonians. So who was this immoral organisation which devised this selfish evil plan? Well it was the former football club known as Glasgow Rangers – and whatever happened to that lot? (oh the irony!...Eddy) 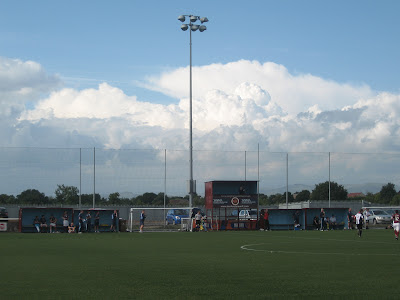 Ochilview was ungraded after a failed relocation scheme in 1994, which involved the sale of the stadium to a supermarket chain for £2.5 million.

The entrance to the ground is off Tryst Road on Gladstone Road which has the McGowans factory on the corner of the street. There is only two parts of the ground open to spectators, which is split by a refreshment bar which serves both sides. The Norway Stand replaced the covered terracing on the south side in 1994-95. The stand has a capacity of 629 and sits on the half way line, decked out in the club colours with two tripod like floodlight structures mounted on top of the roof.
The Tryst Road terrace on the west side of the ground was covered in 2003 and is mainly used by away supporters. Before the match I popped into the Ochilview Bar for a quick pint which is in the far corner of the terrace and is owned by the Club.
The old "Doll's House" on the north side was demolished in April 1999 after being refused a safety certificate. This side of the ground accommodates the team dugouts with a TV gantry in between and a row of small floodlights and a clear view of the Ochil Hills in the background.
The far side of the ground behind the goal is again unused for spectators. The stadium has a synthetic playing surface which was installed in 2006 and the overall capacity currently stands at 3,776.
Goals from new signings John Gemmill and Darren Smith saw Stenny comfortably book their place in the second round of the League Cup.

The hosts got off the a dream start with a fabulous 25 yard strike from John Gemmell with only 20 seconds on the clock, which was the fastest goal* I’ve seen scored in Scotland and one of the quickest of my football watching career.
The Warriors had to wait until the 76th minute for their second goal, substitute Darren Smith with a nice side foot volley from a left wing cross, then the other sub Stewart Keen slotted home the third from the spot. Sean Dickson was nudged out of the way by Gerard McLauchlan and the big defender received a straight red card. Smith claimed his second of the day in injury time running through on goal before producing a cool finish the round off a great afternoon’s work for Stenny.
* For the record 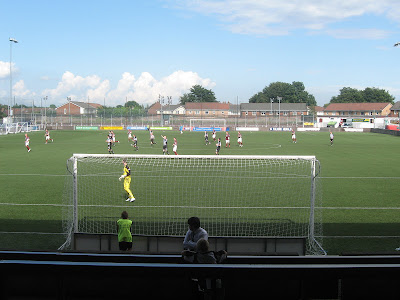 I enjoy my visit the Ochilview and on the whole I found Stenhousemuir FC a very hospitable club and I'd like to wish them all the best over the coming season and good luck in the next round of the Cup.

Afterwards I caught the 1715 back to Edinburgh and as my train back to Newcastle wasn’t until 7pm, this gave me time for a couple of bevvy’s with Squad#155 James Little in the Half Way House, who had just seen Hearts set the early pace in the SPL by going top of the league on goal difference.
The biggest surprise of the day though was the weather, the forecast predicted showers but it was glorious and remaining boiling hot all day which is a total one off and an occurrence which I doubt will be repeated again this season when I again catch the 1144 to Edinburgh.