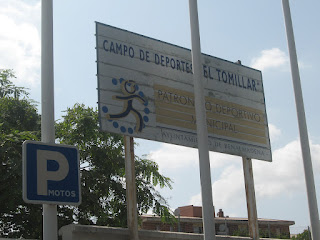 This year’s summer holiday was spent on the Costa del Sol in the small Spanish town of Arroyo de la Miel. The town is situated between the resorts of Fuengirola and Torremolinos, and is a ten-minute walk from the coastal resort of Benalmadena.
As luck would have it, there was a football ground just a five minute stroll from our holiday home and I was blessed with even more good fortune, as the town’s local club Atletico Benamiel had a home fixture on the second night of my holidays.

The club formed in  June 1975, taking their name from the connecting communities of  Benalmadena and Arroyo de la Miel, enrolling in the Andalusian Federation of Football. They currently play in the Primera Andaluza, which is the 5th level of competition in the Spanish League Football in the Community of Andalusia. The league consists of 4 groups of 18 teams, The Yellows contest in Group 3 - the Málaga and Jaén division. 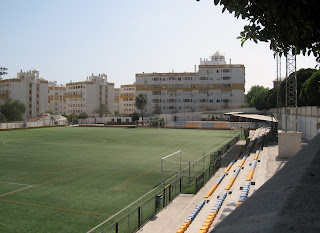 Home matches  are played at El Tomillar, which is discreetly hidden and tucked in between neighbouring apartment blocks and is shared with local side CD Benalmadena FC. The ground has a partly covered main stand with  yellow and light blue bucket seats with an additional similar style seats bolted onto the terrace behind the far side goal. We watched the first half of the game from the stand and the second from the terrace bar in the far corner of the ground, where you can enjoy refreshments while watching the game.
At the main entrance there’s two buildings which accommodates the team changing rooms and club offices. Opposite the stand are the team dugouts with a pair of floodlight pylons at each side which run parallel with the main side. El Tomillar also had an artificial surface and the overall capacity is around about 1000 with 268 seats. 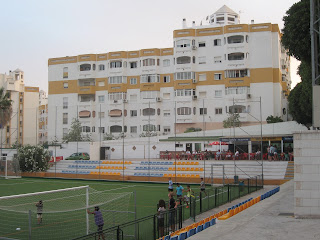 Benamiel faced CD El Palo in a pre-season fixture, the visitors play at a higher level than the hosts in  the Tercera División The gap in class was apparent from the off as the visitors recorded a comfortable three goal victory, breaking the deadlock on 34 minutes in an otherwise uneventful first half before a better second period, adding two late goals to give the final score a more genuine reflection on the overall ninety minutes play. 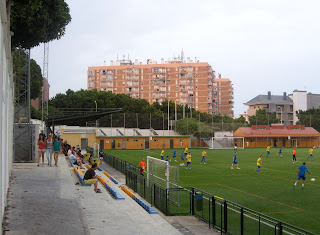 If your holidaying in the Costa del Sol and looking to take in a match then your spoilt for choice in Andalusia, with plenty of clubs to choose from in the Tercera and  the Divisiones Regionales. Whilst away I did manage to take a break from the San Miguel to bag another ground, going to see the second best team in Spain(if you take away Barca and Real) and the premier club in the this part of the autonomous community of Andalusia - Málaga C.F. 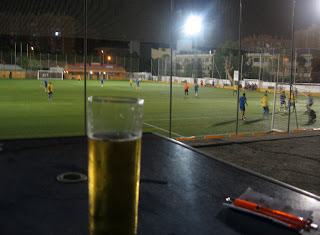