As the new season approaches, football pitches should be in prime condition at this time of year, but our traditional wet summer has played havoc with the regions grounds, resulting in clubs looking at alternative venues to host pre-season matches.

The most reliable surface to guarantee watching football are 3G pitches, two of which can be found in South Tyneside with both venues hosting games on the same day with convenient staggered kick off times. The question is though, can you count these grounds as a tick? My personal view is if two clubs in the non-league pyramid play a game in an enclosed pitch then that’s good enough for me, so a definite YES. 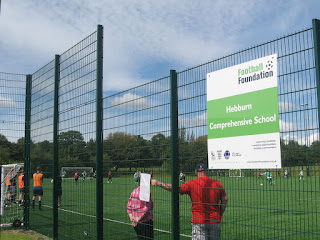 Hebburn Town hosted West Allotment Celtic at the Clegwell Community Association 3G pitch which is the home base of Hebburn Juniors, found around a mile from the Hebburn Sports & Social Ground.

The match was an entertaining encounter with Hebburn playing some great passing football on the carpetesque surface, however it was Celtic, who themselves are traditionally a good footballing side, that took the lead with a two goal blast from Dean Lee and Liam Hudson before half time.
McBryde was introduced at the start of the second half and temporary halved the arrears before a mistake from the ’keeper allowed Hudson to make it 3-1 on the hour.
Hebburn finished the game strongly and McBryde was twice on hand to complete his hat-trick with a late brace to earn his side a well deserved share of the spoils.

I met up with Squad#121 Paul Johnson at the game and also have a bit craic with Squad#173 and Hebburn Town wordsmith Andy Hudson during the match.
The 1.15pm kick off meant there was enough time for me and Paul to jump in the car and take the 15 minute drive(probably quicker if you know the way) to the Mortimer 3G pitch in South Shields for our second match of the afternoon which was due to start at 3pm. 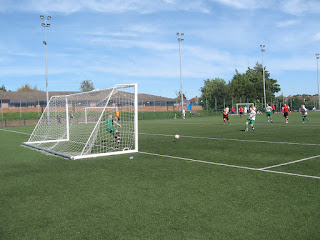 Mortimer Comprehensive has already hosted a few pre-season friendlies so far this season and today it played host to Birtley Town against Wearside League outfit Sunderland West End, which meant both today's game saw a team in green and white hoops playing a team in red shirts and black shorts.


On route to the ground I somehow missed the coining for the A194 so we arrived just after the start to learn that the game had kicked off a few minutes early and West End had already taking the lead with a goal from McQuillan.
However the teams made up for us missing that early strike with a goalfest as Birtley overturned the deficit with goals from Stafford and a 25 yard free kick from Allsopp to lead 2-1 at half time.
West End then conceded two penalties, the first one a bit harsh, but Marron confidently stepped up to strike both his penalties in the same spot, before Telford made it 5-1 on 67 minutes.
Fryatt got one back for the Wearsiders before Allsop made it six with the best goal I’ve seen so far(I know its only 5 games) this season, picking the ball up on the half way line he strolled past each defender as if they weren’t there before a cheeky chip over the advanced keepers body.
There was still enough time for another consolation goal by Fryatt before the final whistle and when I added it all up it came to a 6-3 win for Birtley Town.
The game appeared to be a bit of a rout on Birtley’s behalf but West End didn’t play too badly and they were handicapped by the fact their goalkeeper was on his honeymoon and didn't have a replacement, the position between the sticks occupied by the teams right-back!
So overall an enjoyable afternoon with two competitive and very entertaining matches with a total of 15 goals scored and best of all it cost us nowt!