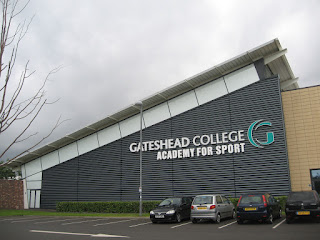 Over the last two months we’ve witnessed the most horrendous conditions, which must surely rank weather wise, as the worst summer of my life (so far). When the footy season closes I look forward to the football free weeks but as each Saturday has been a wash out, I would have been better off at a match in its traditional winter setting, as days at the coast and sunny afternoons in the beer garden never materialised. 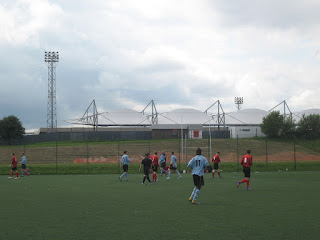 So after a shit summer I’ve been dying to get out and about watching the beautiful game again and after a couple of false starts over this past week my new football season finally got under way with a non-league Anglo-Scottish affair between Whickham from the Northern League and South of Scotland League outfit Dalbeattie Star.


Whickham’s Glebe Ground is also used for cricket so pre-season “home” games are usually played at an alternative venue. You may remember the lads from NE16 kicked off my season a few years back when I saw them play at Farnacres and this time, as they were hosting a club from outside the north-east, the club played it postponement safe by booking the 3G surface behind Gateshead International Stadium.

The pitches were installed in 2007, found behind the East Stand by the grounds of the Gateshead College Academy for Sport. To show the exact location of the ground I hired a helicopter on the morning of the game and took a photograph from above. As you can see from the picture below the fully enclosed pitches with floodlights are found just outside the “Heed Camp”

The two clubs met on this corresponding Saturday last season with Star hosting the game which they won 2-0, however they were unable to complete the double as Whickham revenging last year’s defeat at Islecroft Stadium.
Wearing a change strip of sky blue the hosts took the lead on 39 minutes when a corner kick was met with a flicked header at the near post by Craig Rook, which was likened to Wynn Davies and Andy Carroll by the Whickham staff on the sidelines. The advantage was doubled a few minutes later when Atkinson was on hand to fire a shot low and hard past the ‘keeper before The Star halved the deficit with the last kick of the half, with a neat close range volley from Milligan. 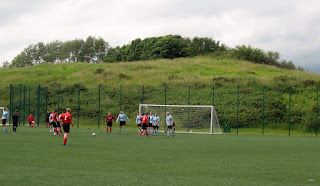 There were no addition goals in the second half but a couple of none sending offs. The referee requested the substitution of the Dalbeattie number nine for his constant dissent and in the closing stages a late tackle by a Whickham player saw a similar outcome.

I’m pleased that the new football season is here and watching a game at what I would class for myself as a “cheeky” new ground. Overall it was a decent game and a good work out for each side with the biggest surprise being apart from it spitting in the closing stages, the rain somehow just managed to hold off till after the full time whistle. 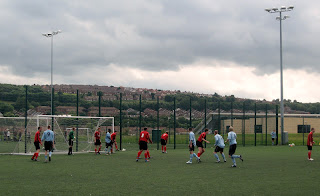