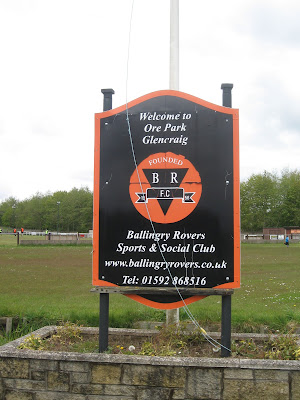 For my traditional last match of the season, I booked trains well in advance to Edinburgh, and as is usually the case, my final game and destination was unknown until a few weeks before matchday. Over the last few years I’ve usually met up with my Edinburgh based 100FgC members (Squad #81 and #155) but both lads headed west today for the Scottish Cup Final (not together and in separate ends) As this seasons cup final was an Edinburgh derby, matches in the area were limited so over the last few weeks I’ve been scratched around looking for a game and found an East Junior Premier League at Ballingry Rovers, over the water in the Kingdom of Fife, kicking off at  1pm.


I arrived in the Scottish capital at 1110 which gave me plenty of time to catch my connecting train to Glenrothes, alighting at Lochgelly (the stop after Cowdenbeath) and onward to Ore Park, which is in the wee former mining village of Glencraig in the Benarty area of Fife. The ground is around a one mile walk from the station to the village along the B920 road, with Ballingry itself situated a further 2 miles north. 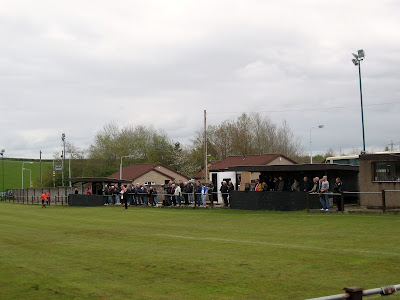 The club were founded in 1956, originally playing at the King George VI Park in Crosshill. Rovers were a successful amateur side for many years, winning the Fife Amateur Cup four times, the Kingdom Cup and championship titles in the Kingdom League and Kirkcaldy & District League.
The club returned to the Junior ranks from the Fife League in 2004, having originally playing in the Scottish Junior set up in their primary years. The SJFA restructured prior to the 2006–07 season placed Rovers in the East Region Central Division, finishing third in their first season and winning the league title the following year. 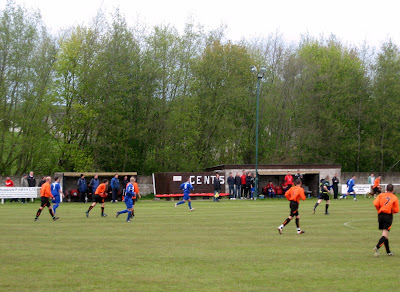 Ballingry Rovers are a community based football club with a municipal plan "to promote and encourage the involvement of the whole community in a structured development of amateur and senior football at all age levels"
Rovers have made a major investment in the developments at Ore Park. The clubhouse and changing rooms are situated in the car park, so players walk into the ground and emerge from the top corner of the sloped pitch. The paying entrance is on Clune Terrace which is the street off the main road and also has two covered enclosures with a snack bar cabin. On the opposite side are the dugouts and at the top end of ground is more cover but with 24 red plastic bucket seats bolted onto the terrace, with added lighting system at both sides.


There is also a small hut in the top corner which houses the PA system. I was shocked that the sound system was blasting out one of those awful rave type tunes that the young’uns are in to nowadays with the repetitive lyric of “That’s the way we like to fuck” which seemed out of place in such a tranquil setting, especially with the MC being an auld fella in his 70’s. 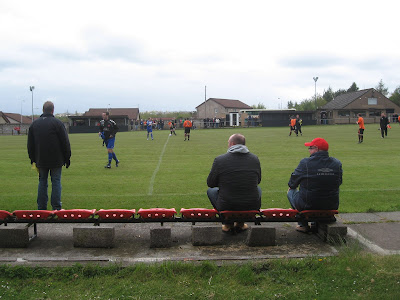 The match with Sauchie Juniors got off to a cracking start with three goals in the first eleven minutes. Cummins headed the visitors into the lead after six minutes but Gilfillan equalised after ten, heading in a free kick from a right wing cross. Sauchie immediately restored the lead when a shot from the edge of the box was parried by the keeper to allow Bell to slide in and  poke the ball under his body, getting injured in the process.


The promotion winners pressed to extend their lead and were fortunate to gain a two goal cushion before the break when a hoof from the goalie bounced awkwardly between defence and attack, with defender Bell nodded the ball back to his keeper which unfortunately sailed over his head into an empty net.
Rovers got back into the game early in the second period with another header from Gilfillan, the right wing cross hung up in the wind, giving him time and space to nod home. The match was an entertaining encounter but was littered with late challenges and yellow cards instead of goal mouth incident throughout the second half. Sauchie held onto their one goal advantage and overall deserved the win, just shading it over the full 90 minutes. 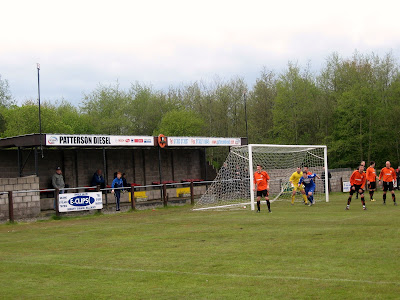 After the game I went into the clubhouse for a pint and watched the first half an hour of the Scottish Cup Final before catching the 1546 back to Edinburgh, making a beeline to Vinyl Villians record store on Leith Walk. I saw lots of peed off Hibs fans coming out of the pubs and arriving back from Glasgow looking suicidal, which was understandable after a humiliation 5-1 defeat at the hands of their nearest rivals. I stayed around this area for drinks in the Cask & Barrell, Conan Doyle and The Playfair before heading back to Waverley for the 1830 back to Newcastle.


Overall a really enjoyable day and a very good trip to finish off my sixth season of ground blogging on 100FgC, which in terms of personal achievement, has been my greatest season so far. 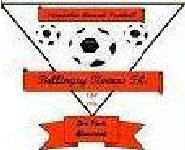