FA Vase Final 2012
Dunston UTS 2v0 West Auckland Town
Sunday 13th May 2012﻿﻿﻿﻿﻿﻿﻿﻿
This report is all about my matchday, so Googlewallers looking for the beef on Wembley will have to search elsewhere for the tedious stuff like how construction was four years behind schedule, with an eventual cost of almost £800m, making it one of the most expensive stadiums in the world.
What I can say is the new Wembley is a 90,000 capacity all seated bowl with its distinct feature being the big eff off arch which spans 440 feet across the stadium. One gripe I do have about the arena is that it looks as if the FA got a good deal on a job lot of red seats, they could have been a bit more creative instead of wall to wall red with WEMBLEY picked out in dark blue seats behind each goal, maybe spice it up with white seats with the red cross of St. George behind each goal as this IS supposed to be the home of England.

When the new Wembley was finally completed there was much debate whether to class the stadium as a new ground. The Empire Stadium was fully demolished and the new version rebuilt from scratch with the pitch moved 40 yards north from its original spot away from the railway line, towards Wembley Park tube station. I did an online survey on 100FgC at the time and the result was a 72% YES vote meaning as far as myself and the 100FgC squad is concerned, this counts as another new “tick”. 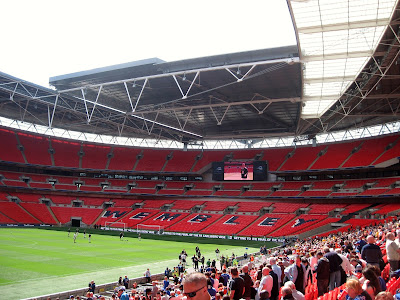 The 2012 FA Vase Final had an extra special ingredient, an all Northern League final as little Dunston, the birthplace of Gazza (Newcastle, Spurs, Rangers) Brian Johnson (Geordie, AC/DC) and the Metrocentre (M&S, House of Ally Fraser, Primark) coming up against the original World Cup winners West Auckland Town(Sir Thomas Lipton Trophy 1909, 1911) This was only the third occasion that two north-eastern clubs have met at the national stadium, the last such occasion coming in the 1954 Amateur Cup final between Bishop Auckland and Crook and also the first time two clubs from the same league have met in the FA Vase final.
West Auckland’s path to Wembley began in the qualifying rounds, despatching both Cleator Moor Celtic and Marske United before meeting Shildon in the first round, when an own goal in the last minute of extra time booked a home tie against Bacup Borough. West progress the hard way, drawn away four times on route to the semi-finals, winning at Askern Villa, Bitton, Whitley Bay and Bournemouth, the highlight of course was beating the current hat-trick Vase holders 2-1 at Hillheads.

Dunston came into the competition at the 2nd Round stage with aplomb giving a 12-1 smacked arse to Blackwell MW followed by another home success over Parkgate. I travelled to Wisbech for the 4th round clash, the game finished all square after 120 minutes before the Fed completed the job with 3-1 home win in the replay. After a routine victory over Bethnal Green United the highlight of this Vase run and a match which I was gutted to have missed (I was in Aberdeen) came against Peterborough North Star. A fantastic seven goal thriller with five of the goals coming in a thrilling extra period concluded with a last minute winner from Bulford to win the tie 4-3.

I was shocked when the semi-final draw kept Dunston and West Auckland apart, instead we were handed the best possible draw out of the remaining teams in the competition against Northern East Counties side Staveley MW. A tight first leg encounter on Tyneside was settled with Bully’s 12th Vase goal of the season to take a narrow lead to Derbyshire. The following week Dunston fans went through the emotional mill as a topsy-turvy game was settled by a late Stephen Goddard strike to win the tie 3-2 on aggregate.
Meanwhile West were handed a tricky tie and a long trek to Kent to take on Herne Bay but with the advantage of the return leg at Darlington Road. An incident packed game finished all square as Herne Bay came back from two goals down to level the tie, then back in County Durham a Michael Rae first half brace seemed to have set West on their way. However it wasn’t all plain sailing as the visitors reduced the arrears before half time and Andrew Green’s dismissal in the 47th minute saw a nervous racking second half, but West Auckland held on to book their place in the final. 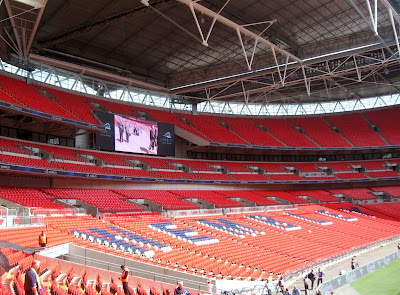 I’ve been looking forward to this game since the semi-final win at Staveley six weeks ago, although due to my past history at the twin towers I was expecting another frustrating ninety minutes and a Dunston defeat. For this special day I decided to take my son James with me, as you never know if we’ll ever get another chance to go to a Wembley cup final together.
I woke up on a bright sunny Sunday morning in a confident mood, my Wembley pessimism diminished as I looked forward to a day out with the bairn(Howay, he’s 13 now…Eddy) and meeting up with friends pre-match and now fully expecting Dunston to come home with the Vase.

We boarded to 0755 from Central Station, the train half full with Dunston fans before being invaded by the West Auckland mob at Durham and Darlington. We arrived just before 11am and headed to a previous uncharted Wetherspoons; The Metropolitan next to Baker Street station for a couple of drinks and some blotting paper(food which absorbs alcohol)before heading up to Wembley.

I arranged to meet everybody at The Green Man, but it seemed that the whole population of the small village of West Auckland had invaded this Wembley pub. Amongst the sea of black and yellow colours I spotted a few Dunston fans that I know, but I decided to just have the one pint and nick off elsewhere, as there was another Wetherspoons to be had on Wembley High Road. It was a good job I left when I did because five minutes later it all kicked off between both sets of fans. I saw my mate (who I spoke to before I left) outside the stadium and he told me what happened as well as showing me his injured balloon hand! 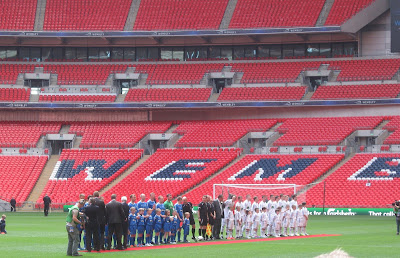 Both sets of supporters created a great atmosphere when you consider the small attendance (Only 85,000 empty seats…Eddy) The first half was evenly matched, West had more possession but the front two of Moffatt and Rae failed to fully test Liam Connell in the Dunston goal. Andrew Bulford always looked most likely to break the deadlock, twice he did well to stay onside but failed to get in a decent effort to test the keeper until the 32nd minute, when he again timed his run to perfection before lobbing Bell from the edge of the box with a tremendous finish to give the Fed the lead, which they took into the break.
I was expecting a better performance from West Auckland in the second half and they looked to have grabbed an early equaliser, but Moffatt’s close range effort was ruled off for offside, to equal a chalked off header by Chris Swailes in the first half. Dunston comfortably soaked up the West wave of attacks before growing in confidence and stamping their authority on the game. In the 70th minute Bulford hit the crossbar with a 25 yard screamer then minutes later Goddard was denied as the woodwork again came to West’s rescue. Bulford had another good effort and Swailes went close with a header until that man Bully did it again with his 15th goal in the Vase this season. Connell’s long kick was flicked on by Goddard and the Dunston number 10 nipped in between the two defenders to poke the ball home which killed off any lingering hopes of the Vase heading to County Durham.

The final whistle was greeting with mass celebrations in the Dunston end as the Wembley PA blasted out Lindisfarne’s ‘Run For Home’ with the amusing sight of the suited and booted club officials singing their hearts out in the royal box. All that was left was for Dunston’s skipper and local lad Ben Cattannach to lead the winning side up the Wembley stairs to lift the Vase, followed by the traditional popping of champagne corks on the hallowed turf. The Vase remains on Tyneside, but now it’s heading from the north side of the Tyne by the coast, to the south side of the river, right next to the Metty.
Well done Dunston UTS, a smashing club and well deserved and a personal thank you from yours truly for giving me the experience of seeing a team I support winning at the home of football, so hopefully this is just the first of many and the start of a beautiful friendship with the new Wembley Stadium. 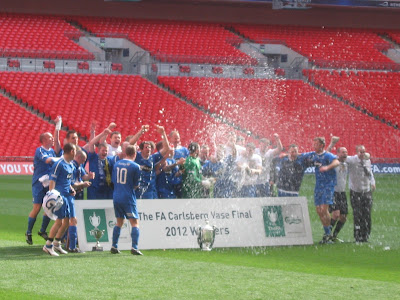