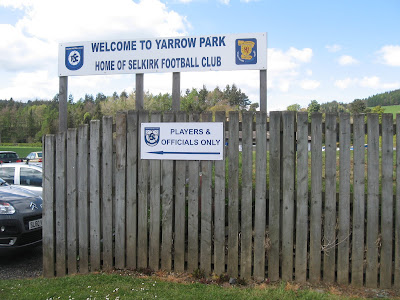 Selkirk is one of the oldest Royal Burghs in Scotland and the site of the earliest settlements in what is now the Scottish Borders. The town was formerly the county town of Selkirkshire and lies on the Ettrick Water, an offshoot of the River Tweed
The town's name originates from the Anglian word; “Seleschirche” meaning 'Kirk in the Forest' and came to prominence through its woollen industry, although nowadays it is well known for bannocks, a dry fruit flat cake.
Selkirk has associations with the explorer Mungo Park and poet James Hogg ("The Ettrick Shepherd") and Romantic author Walter Scott, both writers from the late eighteenth and early nineteenth century. Selkirk also has connections with Bonnie Prince Charlie, the Marquess of Montrose and the Outlaw Murray and is home to Scotland's oldest horse racing track, the Gala Rig, on the outskirts of the town


Although its only 60 miles from the 100FgC HQ to the border crossing on the A68 at Carter Bar, the drive to Selkirk took longer than I thought, at just over 2 hours. I met up with Squad #81 Jamie McQueen who was there watching his non-league team and produces the Whitehill Welfare programme, churning out an impressive 27 issues this season. 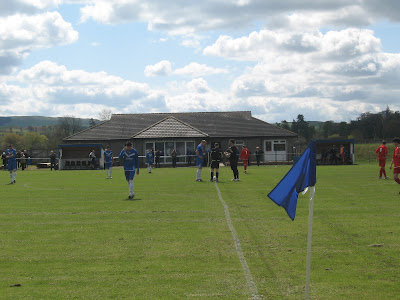 Selkirk FC are the oldest club in the Borders, formed in 1880 and nicknamed The Souters, which means cobblers (shoe repairers) and is also the name giving to the townsfolk.
The club has produced four Scottish international players, notably Bob Mercer, who played for Heart of Midlothian and sadly collapsed and died aged only 36, while playing in a friendly match at Selkirk, and also Selkirk-born Bobby Johnstone, who was a member of Hibernian's Famous Five and later played for Manchester City. In 2003 the clubroom at Yarrow Park was named in his honour and City provided the opposition to mark the occasion.
The club have regularly appeared in the Scottish Cup with their most infamous appearance in 1984–85 when they were beaten 20–0 by Stirling Albion, which gave the club the unwanted record of the heaviest defeat in British senior football during the 20th century. Apparently the first team had temporarily dropped out of the East of Scotland League and to maintain their future participation in the Scottish Cup, the' club’s feeder side Selkirk Victoria took to the field under the Selkirk FC name and were well and truly gubbed by their professional opponents.
The Souters feeder team ’The Vics’ play in the Border Amateur League and the club have a full range of youth teams from under 8s to under 17s. 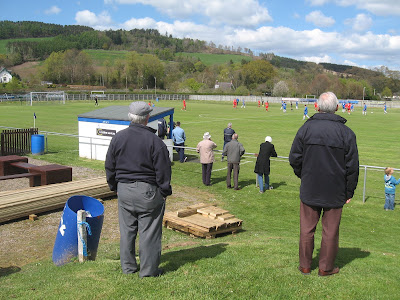 The club previously played down river at Ettrick Park, before moving into a new pavilion and playing field at Yarrow Park in Philiphaugh in February 2000, opening with a glamour friendly against Manchester United.


The ground was difficult to find, found at the bottom of Ettrickhaugh Road, past the rugby ground and hidden behind the cricket pitch. When I arrived there was a big crowd gathering for the rugby plus there was also a cricket match in progress, so all three sports were taking place at the same time. At one point some of the cricketers peeped over the fence to watch the fitba instead of their own cricket match.
The pitch is fully fenced off with the dugouts in front of the pavilion, which houses the changing rooms and clubhouse, where alcohol, hot food and drinks are available and there’s also a larger TV screen showing Sky Sports. The main vantage point for spectators is the banking on each side of the pavilion which has a few wooden benches. 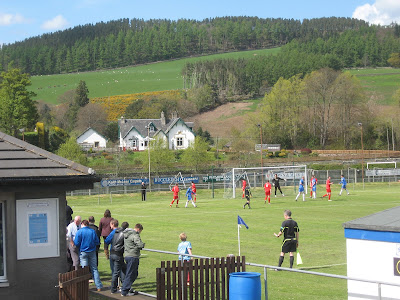 Selkirk won promotion to the East of Scotland Premier League in 2005–06 but next season the club will return to the First Division, relegation already confirmed with the team rooted at the foot of the table, but they finished the season on a high with a rather fortunate but nonetheless an entertaining finale to their season.
The hosts kitted out in a change strip of all red (apparently Whitehill’s away kit was still in the wash from Wednesday) fell behind inside five minutes when McCulloch latched on to a through ball before producing a calm finish.
Whitehill had numerous chances to kill the game off before half time but went into the interval a goal behind. Burdett levelled on 42 minutes with a sweet free kick from 20 yards then with the last kick of the half, Holness was left unmarked to produce a tidy volley from close range.
The visitors levelled ten minutes after the break when good wing play from Brown laid the ball on a plate for Somerville to fire home, before the striker looked to have grabbed his second on 65 minutes, his piledriver from the edge of the box rattled the underside of the crossbar and bounced either over or on the line.
The locals amongst those in attendance saw the ball bounce on the line while the travelling contingent insisted it was a good foot over. The only four neutrals in the crowd, that’s me and the officials agreed that it wasn’t a goal, so yet another case for goal line technology!!!
Selkirk grabbed the winner in the 83rd minute when a shot from Watt struck Young in the elbow. The referee had no hesitation in awarding a penalty and Watt stepped up to convert the spot kick to round off an entertaining and enjoyable afternoon at Yarrow Park. 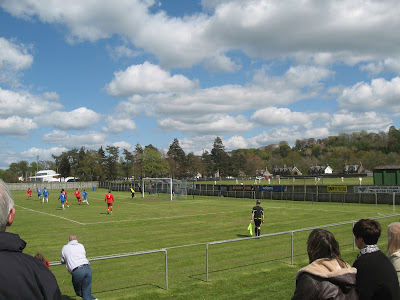 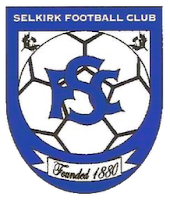 That was Whitehill's away kit. It was the home kit that was in the wash.
Definitely over the line;-)