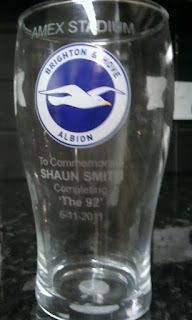 In the future I will look back on the 2011-12 season with great fondness as this was the season I finally completed ‘The 92.’ Followers of the 100FgC blog will know that this was something I'd became obsesssed with over the last few years, so it was great to have this complete with only a third of the season gone. I also wanted to finish the Conference grounds as well, but was unable to make it to Newport County in March, which meant I just fell one shy of finishing the top 116 clubs in the same season. As well as this I rattled off a few in Scotland so I’ve now bagged over half of the Scottish 42, although completing this set will proof more of a challenge.

This season was also a success on the field, with Newcastle finishing 5th which means a return to Europe for me and the Toon Army. Gateshead also had a cracking season, in and around the play offs finishing 8th and to top it all off I saw Dunston lift the FA Vase at Wembley, so overall a fabulous 10 months.

As usual an excellent blog of an excellent season
My only highlight was the trip with you to Brighton
The Mariners had an up and down season like a bunch of wankers at times - scored sixes and sevens and fives in and out - that first away game at Braintree losing five nil to a bunch of plumbers tested my resolve greatly. The season promised much (York did what I expected us to) but fizzled out inthe end - both of your teams did better than mine - even Trinity lost the POF at home to a team they'd done the double over!
That's football for yer - beautiful game? My arse!
But we'll be back next season - more conference grounds plus those I've missed and looking forward to Rotherham - and seeing you again!!!