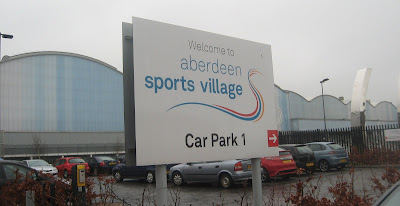 After the match at Aberdeen my original plan was for myself and Squad#173 Andy Hudson to travel down to Arbroath with Squad#68 Jonathan Elton who was hiring a car from Edinburgh Airport. Unfortunately Jonathan was stuck in the America, his flight to London was cancelled meaning he was unable to catch his planned flight to Scotland the following day.
On receiving the news I scanned the internet looking for Scottish Junior fixtures with hopefully a 2pm kick off. It didn’t take me long to find a game, as Aberdeen based Lewis United were at home in the North Region Superleague. I looked on Google Maps to find the distance between the two grounds and you can imagine my upmost delight on finding that it’s 0.3miles and a 6 minute walk, basically just around the corner. 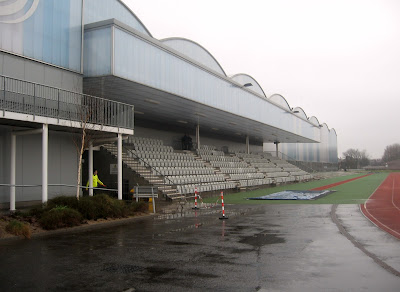 The Chris Anderson Stadium (formerly the Linksfield Stadium) is part of the Aberdeen Sports Village. The complex includes an indoor football pitch and athletics area, hockey pitch, squash courts and also includes a seminar and office centre. The stadium was rebuild between 2007 and 2009 and during this period Lewis United played all their games away for one season before ground sharing with neighbours East End F.C.

From 2009 Lewis United agreed a ten year lease to use the main outdoor pitch which is surrounded by an 8 lane running track. There’s a neat looking 500 seated stand which backs onto the main building at the village, which is fitted with silver plastic flip seats and a flat Perspex aided roof. The stand is the only spectator point in the ground, there’s also standing room on the balcony which leads out to the exit. Refreshments are found in the Village Centre, with a café area in reception and there are also hot drinks machines.
Over the far side next to the hockey pitch is New Advocates Park, the home of East End, where you can see the action in one half of the pitch. If I was the kind of groundhopper who briefly visits grounds and still counts them, then I could have done a treble today, watching the first half at Lewis and the second at East End. The Richard Donald Stand at Pittodrie can also be clearly seen, in fact if both clubs were at home at the same time you would probably viddy both games from the stand’s top tier. 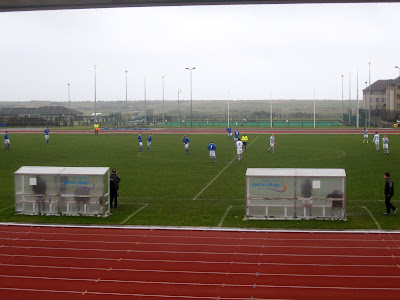 Lewis United formed as a Juvenile side out of John Lewis & Sons shipbuilders in Aberdeen in 1942, becoming a Junior outfit in 1947 and nicknamed “The Hoops” because of their Celtic style green and white shirts. The club are very much a cup winning team gaining many honours between the 1950s and 1970s in most notably the Archibald Cup, McLeman Cup, North East League Cup and lifting the Duthie Cup seven times.
The Hoops won the North East Division One League title in 1996-97 and the Morrison Trophy three times, the last of which came in 2002-03. Despite being homeless at the time, promotion was achieved to the Northern Region Superleague in 2008.

The (deep breathe) North Region Junior FA PMAC Group Superleague clash with Banchory St Ternon produced ten goals and amongst them one of the best strikes I’ve seen this season. Instead of a proper full detailed match report, which would take up at least 1000 words I’ll just make do with a summary of proceedings.
The Hoops took the lead on nine minutes through centre-forward Law, before the visitors got a foothold on the game and eventually equalising on 33 minutes. A corner kick was cleared out of the danger zone and picked up by right back Burke who unleashed a raker of a shot from at least 35 yards which flew into the top corner of the net. An absolutely stunning goal, it’s a pity that a crowd of only 24 and the players and managers were the only fortunate ones to witness such a strike.

McRae headed the visitors into a half time lead, then two goals early in the second half by Watt and Carroll put Banchory 4-1 ahead, but Lewis wouldn’t lie down, hitting back through Bescott and McCormack to make it 3-4 with only an hour played. But any hope of snatching a draw were diminished as the Saints added a further two goals to their tally and a consolation from United resulted in a final score of four goals to six.

Instead of watching this ten goal thriller I could have still have made it to Arbroath, but this meant leaving Pittodrie early and rushing to catch the 1404 train. Then once arriving in Arbroath I would have missed the kick off and also the end of the match, having to leave early to head south. However I’m not too bothered as there’ll be other opportunities to visit Gayfield, plus I would have missed out on an entertaining encounter and going to a ground that I otherwise wouldn’t have thought of visiting. So yet again, I have to announce that I enjoyed another cracking day out whilst travelling north and the furthest point that I’ve hit the north so far. 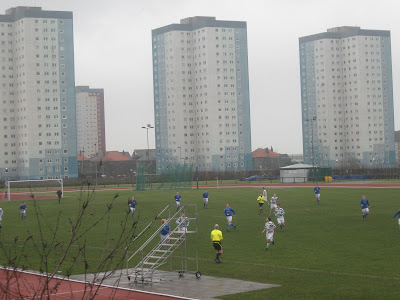