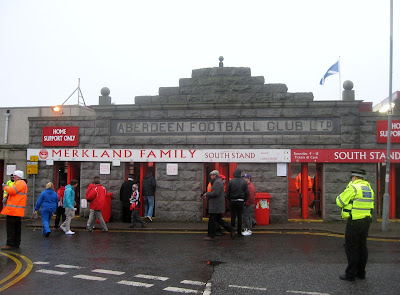 For a second successive Saturday, Aberdeen were giving the noon TV slot, this week entertaining champions elect Celtic at Pittodrie. Last week I saw the Dons in action at St Mirren as part of a Scottish groundhopping double and again I was back in northern Britain to take advantage of another early kick-off to bag another two new grounds.

Aberdeen is the third most populous city in Scotland, situated between the rivers Dee and Don on the North Sea coast line. Aberdeen is traditionally home to fishing, textile mills, shipbuilding and paper making. The city is nicknamed the “Granite City” in relation to the grey granite which was quarried at Rubislaw for over 300 years until production ceased in 1971. The stone was used for paving setts, kerb and building stones, and also monumental and ornamental pieces, seen at the likes of the terraces at the Houses of Parliament and at Waterloo Bridge in London. Aberdeen is also known as the Silver City with Golden Sands and also the Oil Capital of Europe since the discovery of North Sea oil in the 1970s. 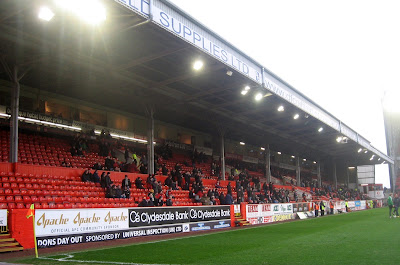 Pittodrie was opened in 1899, the original tenants being the first Aberdeen club, which amalgamated with Victoria United and Orion to form Aberdeen FC on the 18th April 1903. The land, situated only 500 metres from the North Sea, was leased from Mr Knight Erskine of Pittodrie(a village 20 miles north-west of Aberdeen) although the origin of the name may well stem from the Celtic interpretation meaning ‘ a place of manure’ as the ground was built upon a former dung mound for police horses.

The first game at Pittodrie Park took place on the 2nd September 1899, when the original club hammered Dumbarton 7-1, with the integrated club drawing 1-1 with Stenhousemuir on 15th August 1903 in front of 8000 spectators. The ground also held a Scottish international in its early days, with a match against Wales in February 1900.
Pittodrie came to prominence once the club purchased the ground outright in December 1920. The Main Stand including club offices, dressing rooms and trophy room was built in 1925 and the land opposite on Pittodrie Street was purchased in 1928.The ground became a football pioneer in this decade with the first ever dugouts introduced by club coach Donald Coleman, built to study the players footwork from a lower level to the pitch.
During the 1950’s a record attendance of 45,061 was set in March ‘54 for a Scottish Cup tie against Hearts, cover was added at the Beach End and then in October 1959 Luton Town provided the opposition in a friendly match as floodlights were switched on for the first time.


The Main Stand became all seated prior to the 1968-69 season with seats installed in the paddock as part of £100,000 worth of ground improvements, which coincided with the renaming from a Park to a Stadium. In February 1971 part of the Main Stand was destroyed by fire which also gutted the dressing rooms and club offices, this mini-disaster was the catalyst for the eventual conversion to an all-seated stadium. The restoration work on the stand cost £140,000, and then as a cost cutting exercise, expensive crash barriers with replaced with bench seats, so by 1973 both the Merkland Road End and Beach End became seated stands. The final stand to be transformed was the uncovered South Side making Pittodrie Britain’s first all seated stadium in 1978. 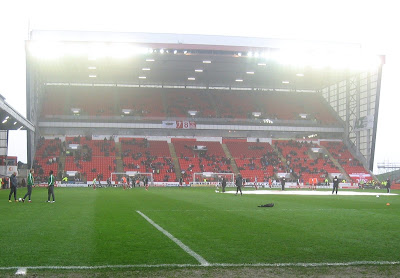 The Main stand still looks in good shape for a structure which is approaching its 90th birthday. The stand has a number of supporting pillars which has restricted views amongst the 3,655 red seats. You’ll notice where the roof was extended after the fire, now covering the former paddock. At the rear of the stand are 24 executive boxes installed in 1985 and at the front are the historic dugouts at each side of the tunnel.
The south side became the South Stand in 1980, following the construction of a cantilever roof covering the majority of the stand, with the benches replaced by individual seats the following year. The stand has 8,400 seats with the east part of the stand housing the away fans and just over half the stand put by for matches with the Old Firm. The television gantry is suspended centrally and the stand is filled with both red and amber seats.
Named after the club’s former player, manager and long serving chairman, the £4.5m Richard Donald Stand is the stadium’s most recent development replacing the Beach End stand in 1992-93. The two tier structure towers over the rest of the ground, almost twice the size of its three mates with 6,064 red seats split by a row of 12 executive boxes, which brings the overall ground capacity to 22,199.

Behind the west goal is the Merkland Stand which is now the club’s family stand and also has a section for disabled supporters near the pitch. The stand entrance façade constructed from local granite stone has stood since 1928 when the club bought the land on Pittodrie Street.  The stand has 3,545 red flip seats and a new low roof was built in 1985. In between this stand and the South Stand is the only section of uncovered seating in the corner. 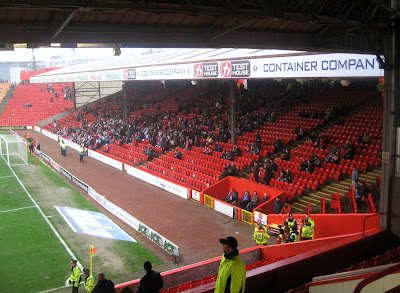 My day started early on the 0630 from Newcastle to Edinburgh, from where I caught the 0828 Scotrail service to Aberdeen, where on-board  I met squad#173 Andy Hudson for the first time, who introduced himself to me via a tweet!  We arrived in the Granite City just before 11am and marched straight to the nearest ‘Spoons for a swift pint before jumping a taxi to the stadium. Our approach to the ground was accompanied by rowdy Celtic fans, who also provided a good atmosphere within the stadium.
The match itself took a while to get going, what the game desired was Aberdeen to take lead to give the match more of an edge, but it was Celtic who broke the deadlock on 28 minutes. A Kris Commons through ball was played into Anthony Stokes who showed good control to round the keeper before slotting home from a tight angle.
Celtic looked set to boss the game and extend their lead, but just before the interval the Dons equalised. Scott Vernon’s pass found Rae whose effort took a wicked deflection off Andre Blackman to give Foster no chance.


Aberdeen played much better in the second period and had chances to win it, going close with a Rory Fallon effort, before Vernon headed narrowly wide and a golden opportunity was wasted by Mitchel Megginson. The Dons battled well in the closing stages as Celtic pushed for a winner, but on the whole the draw was a fair result. The hosts can be satisfied with ending Celtic’s 17 game winning streak and both clubs remain unbeaten in 2012.
Andy made a sharp exit from the press box to catch the train to Arbroath, missing the closing stages but thankfully no winning goal. Gayfield was also part of my original plan for the double, until a text message on Friday night meant a plan B was required. So for my second new ground of the day I left Pittodrie and took a leisurely stroll up Ardarroch Road to Aberdeen Sports Village, arriving with time to spare for a 2pm kick off at Lewis United. 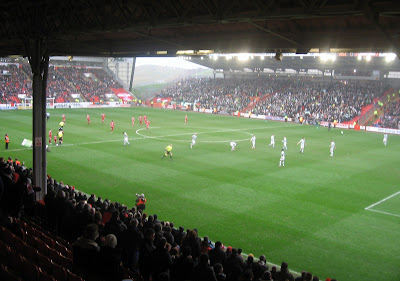