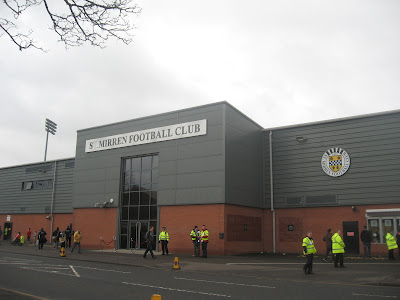 It’s four years since I made my last visit to Paisley to tick off Love Street, a year before retail giants Tesco got their greedy hands on St Mirren’s home for the previous 115 years. The noon kick off meant the possibility of bagged two grounds, so I set off on the 0738 to Glasgow Central for the first train journey out of a series of six in pursuit of a Scottish double.
As I’ve already featured St Mirren on 100FgC, any Googlewallers that have arrived at this page looking for information on the Saints, their ground history and the town of Paisley should check out my previous post - My Matchday – 157 Love Street.
I have a bit of a soft spot for St Mirren, the principal logic being that I have an affinity for clubs that wear vertical black and white stripes, well apart from Juventus of course, and Grimsby as well, and come to think of it I’m not too chewed on Notts County either, but apart from them I always cheer on the black ‘n’ whites. 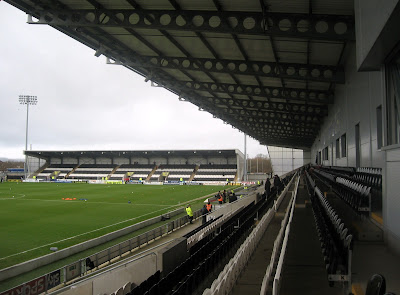 St Mirren completed their move from one St Mirren Park to another in January 2009, or to use their more common names - from Love Street to Greenhill Road. The new stadium was officially opened by club chairman Stewart Gilmour and First Minister Alex Salmond, prior to the first match against Kilmarnock. The game finished 1-1, with the stadium’s first goal scored by Kilmarnock striker and former mackem lummox Kevin Kyle ,with Dennis Wyness grabbing the first goal for the Buddies.
St Mirren Park was built on a former housing estate site in Ferguslie Park by Barr Construction at a cost of around £8m. The ground is pretty basic affair containing four separate stands with an overall capacity of 8,023.
There are single tiered stands on three sides, similar in size with large windshields at each side. The North and South Stands have a capacity of 1,600, decked out in black with two horizontal white bands of seats.
The 2,200 Main Stand is taller than the others due to the large panel wall which rises up to the roof. This area contains office space, hospitality, press room as well as having the team dugouts at the front.
Opposite is the 2,216 capacity East Stand, which is similar to the stands behind the goals except it has SMFC in white seats in front of the TV gantry.
Outside of the stadium there’s plenty of car park space around three sides and next to the main reception is the club shop with a supporter’s wall of fame. There are also outdoor 5-a-side pitches behind the North Stand. 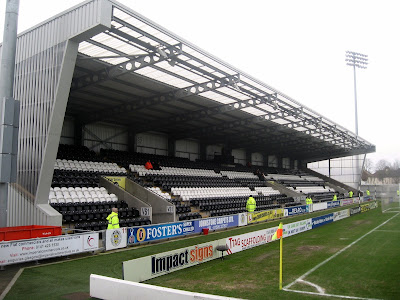 I arrived at Paisley St James just before 11am, then after doing a lap of the interior of the ground I picked up my press pass and got prepared for the noon SPL clash with Aberdeen.

I don’t know if it was the early kick off or maybe the cold breeze and rain showers but the match produced an uneventful first half. Aberdeen were the better side with Icelandic playmaker Kari Arnason going close with a header and shooting just wide from the edge of the box.
I welcomed the half time interval as I was pleased to get out of the wind tunnel stand and get stuck into the hot drinks, scotch pies and biscuits in the press room. The lads covering the game for ESPN struggled to find anything to discuss, focusing on the disallowed goal in injury time from Ryan Jack who was marginally offside, the linesman getting the decision spot on. 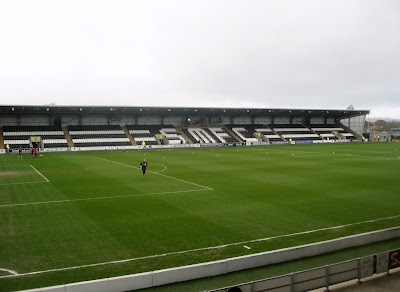 The game sprang into life with two goals in the space of a few minutes just before the hour mark. Danger man Nigel Hasselbaink (before you ask it’s Jimmy’s nephew…Eddy) got on the end of a Steven Thompson flick to race into the box and place his shot inside the far post. However the Dons reply was instant, a long ball from Mawene found Megginson in the box who calmly laid the ball into the path of Vernon, who rifled the ball high into the net.

The match improved as both sides looked for a winner and it was the visitors who went closest with substitute Pawlett going close and then Teale had a last minute strike which Brown dealt with comfortably.
After the match I legged it across the road to catch the Gourock train, the 30 minute journey gave me time to defrost before alighting at Cartsdyke for the second leg of today’s double at Greenock Morton. 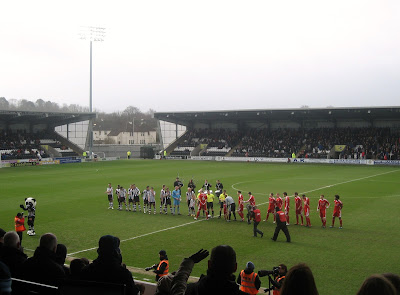 Check your compass settings bud, the stand housing the away support at the 5-a-sides pitches is actually the north stand. You should be able work out the rest from there :)