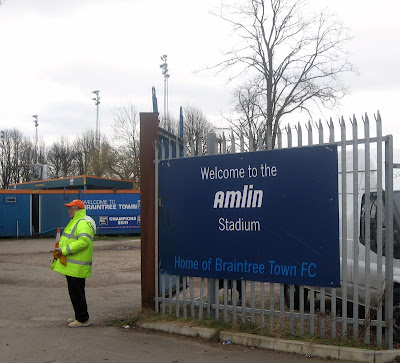 After a couple of weeks travelling north and catching two games in one day there was only one destination this week, as the only way was Essex to watch my beloved Gateshead in action at Braintree Town.

The town was first recorded in the 1085 Domesday Book as Brantry and Branchetreu, when originally consisted of 30 acres of land owned by Richard, the son of Count Gilbert. From the 17th century the town prospered as Flemish immigrants made the town famous for its wool trade, until the vocation died out in the early 19th century. Braintree then became a centre for silk manufacturing and by the mid-19th century thrived in agricultural and textile, benefitting by the rail connection to London.
Braintree is 40 miles from London in the north of the county and has contiguous grown with several surrounding settlements. The town is referred to as Braintree and Broking, with the main part of Braintree to the south of Stane Street and Broking to the north. 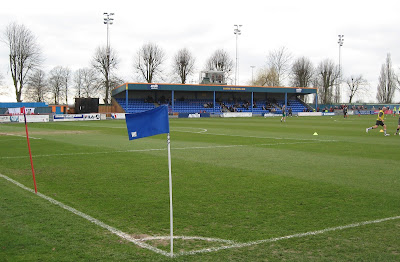 Manor Works FC formed out of the Crittall Window Company works team in 1898, giving the nickname of “The Iron” The new club replaced the defunct Braintree F.C side in the North Essex League, going on to win the title on three occasions in 1905–06, 1910–11 and 1911–12.

The club were renamed Crittall Athletic in 1921, progressing to the Spartan League in 1928 and founder members of the Eastern Counties League in 1935. They won the league in its second season, but left to join the new Essex County League which folded after a single season and so they made a quick return to the ECL.

After the Second World War they played in the Eastern Division London League. They rejected the chance the return to the ECL in 1947 until eventually returning in 1952, the same year as a record attendance of over 4,000 for a testimonial against Tottenham Hotspur. They turned professional two years later but financial problems forced a U-turn, dropping down into the Border League at the end of the 1954–55 season.

The sixties was an eventful decade winning a league and cup double, before twice switching divisions to the Greater London League in 1964, and then to the Metropolitan League in 1966. They were renamed Braintree & Crittall Athletic in 1968 and at the turn of the 1970s they again returned to the Eastern Counties.

The club became Braintree FC in 1981 and two years later added the Town suffix. They won back-to-back ECL titles from 1984 before stepped up to the Southern League in 1991. Due to Geographical reasons they switched the Isthmian League in 1996 and over the next ten years progressed through the three divisions to reach the Conference South in 2006. After twice losing out in the play-offs they won the title last season to earn a place in the top division of the Non-League pyramid. 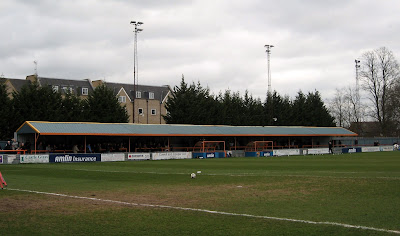 The Manor Works originally played at the Fair Field, before a move to Spaldings Meadow in 1903. The club moved to Cressing Road in 1923, built by the Window Company to provide recreation facilities for its workforce with a 400 seated covered stand and three sides of banking. In 1926 a new clubhouse and changing rooms were built, then in the 1930s a second stand was built opposite the original structure known as No.2 Stand. After the War the second stand was cut in half and attached onto each side of No.1 stand, meaning the Cressing Road end was fully covered but the opposite side was desolate.

In 1967 floodlights were installed before the ground fell into decline, with one side of the attached stand demolished due to a state of disrepair, then the other side was destroyed in a severe gale in 1974. The rest of the stand was taken down in 1975 and a lack of funds saw the ground closed for two years.
The ground began to take shape again from 1990 with a new seated stand, followed by an enclosure supplied from Bedworth’s ground. New terracing was laid and cover was added at the Quag End. Cressing Road has seen numerous changes in almost 80 years of existence and improvements and changes have continued this season with just a few finishing touches left to complete its reconstruction.
The ground is quite homely decked out in blue with orange crash barriers and trimmings. The Main Stand contains 553 blue seats and stands centrally, running half pitch length with terracing at each side and six supporting pillars. The TV gantry is positioned on top of the roof. Opposite is the Cressing Road Terrace which is two thirds covered and has a 1300 capacity with the team dugouts at the front.

The changing rooms, Iron Bar clubhouse and club shop are behind the nearside goal. The terrace has recently seen improvements with a new section recently added and can accommodate approximately 800 fans. Behind the far goal is the open Quag End terrace which also been restored with improvements almost complete. The ground has a set of eight floodlight pylons, four at each side and for sponsorship purposes is known as the Amlin Stadium with an overall capacity of 4,151. 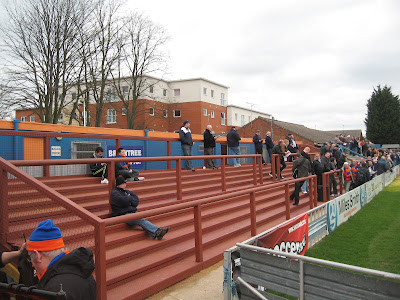 This was the fourth meeting between Braintree Town and Gateshead this season, the previous three games have finished all square but a win result was never in doubt this time as The Iron outmuscled, out battled and outplayed a team which again looked out of sorts and disjointed, producing another poor performance.

The host took a two goal lead with two goals in the opening six minutes. Britt Assombalonga struck first in the 5th minute, giving time and space to curl a right foot shot from the edge of the box, then a minute later a similar goal, this time the defence stood off Ben Wright, allowing him to fire a low hard shot past Farman.

Gateshead had plenty of possession but posed little threat and the second half began in a similar ilk to the first as Assombalonga added his second on 55 minutes. The big striker got on the end of a through ball, left totally unmarked, the slack defending gave him plenty of time to tee up his shot and volley home to make it 3-0.

Braintree looked dangerous with every venture forward while the Heed didn’t muster a single shot on target until the 90th minute, when a corner kick was cleared out to Jamie Chandler who chested and volleyed the ball high into the net from 25 yards. It was a shame that such a wonderful goal was nothing but a token consolation.
Overall a good home performance from The Iron while Gateshead’s chances of reaching the play-offs become more remote as the weeks and fixtures go by. 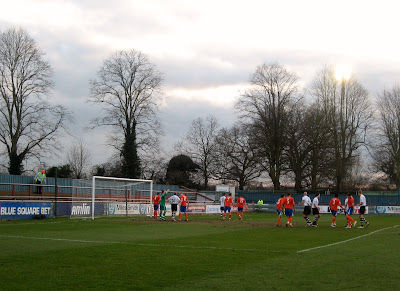 No public transport required for yours truly this week, with much appreciation to Andrew Gelder (aka “Adolf Travel”) for the door-to-door lift to Essex, with the other car spaces taking up by young Mark Thompson and Squad#185 Simon Grobari. After a false start we finally hit the A1 at 9.25am arriving in the home town of Louis Spence and The Prodigy just after 1.30pm
According to the gateman at the ground it was a half an hour walk to the town centre, which put everyone off following me to Wetherspoons. The stroll only took just over ten minutes (That’s at Postman’s pace…Eddy) giving me plenty of time to enjoy a couple of local ales from the Brentwood Brewery in The Picture Palace. This particular branch of ‘Spoons is very impressive, in its previous life the building was the Embassy Cinema and maintains its original features, with the old cinema screen still in use to beam live football.
I had a quick look around the town and the market place, avoiding the temptation to buy a cheap electric guitar before heading back to Cressing Road for the game.
The Heed backing was giving a boost with a few Toon fans making use of their pre-booked train tickets for the Arsenal match, which has been moved to Monday night for live broadcast. I also seen a few faces I hadn’t seen for a while, as well as Squad#194 Keith Arthur who had travelled down from York.
This was one of those days when a good day out was spoilt by 90 minutes of football, but at least I’m pleased to tick off another ground amongst the top 116 clubs. However trips away aren’t just about the football, as some of the Geordies in the crowd only visited Essex for one reason, with claims on the terraces and chants of “We only come for the vajazzle” 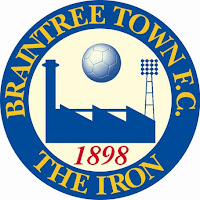 Thanks for the info and good luck!

Great blog, thanks for your contributions.