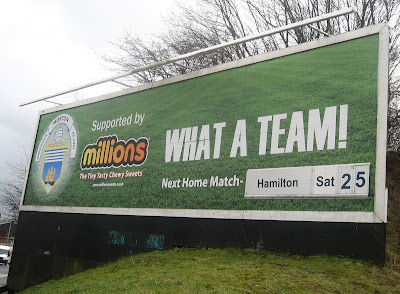 As part of my Scottish double, I left behind a typical modern identikit stadium at St Mirren and headed to Cappielow Park, a classic old fashioned football ground and the home of Greenock Morton.
Established in 1874, Morton Football Club became founder members of the old Scottish Second Division in 1893. The reason behind the innovative name remains uncertain, although it’s believed the name derives from a row of houses named 'Morton Terrace' next to the original pitch where some of the players lived. The town’s name was finally added 120 years later, becoming Greenock Morton FC in 1994.

Greenock is a town in Inverclyde and a former burgh within the historic county of Renfrewshire. The town lies on the south bank of the Clyde at the "Tail of the Bank" where the River Clyde expands into the Firth of Clyde and forms part of a contiguous urban area with Gourock to the west and Port Glasgow to the east.

Historically the town was established through shipbuilding, the first harbour was built in 1710 with the Scotts Shipbuilding and Engineering Co. commenced work the following year. Sugar refining and wool manufacturing has also been major sources of employment, although none of these industries are today part of Greenock's economy. 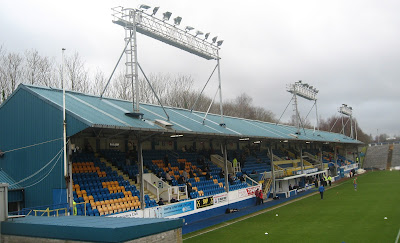 Cappielow Park has been home to Morton F.C. since 1879 and in its early years hosted public lectures, athletics, cycling and the novelty of women’s football (it’ll never catch on…Eddy) as well as hosting a Scotland v Wales clash in the 1902 Home International Championship.

The record attendance of 23,500 was set in 1922 for a league-decider against Celtic, which kicked off both on and off the pitch, as the match ended in a riot causing damage to the ground and surrounding area.

The existing main stand was built in 1931, initially installed with bench seats until the late 1990s, when replaced with blue flip seats with GMFC picked out in amber. The stand has a blue roof and frame with three distinctive floodlights perched on the roof which were first used for a league match against Third Lanark in 1958. The stand is quite picturesque and is nicely completed with the club name and crest above the player’s tunnel.

Opposite at the north end is the Cowshed which once fully terraced until bucket seats were added at the front section instead of the traditional reverse style, probably because of the thick supporting pillars. The stand also has a set of three floodlights akin to those opposite and is three-quarters covered with open terracing at each side.

Behind the eastern goal is the open Sinclair Street Terrace and opposite is the Wee Dublin end, named after the Irish immigrant population of Greenock, that once lived behind the west side of Cappielow Park. Bench seats were bolted onto the terrace in 1978 after the club won promotion to the SPL, which takes the number of seats up to 5,741 in an overall capacity of 11,100. The stand is currently not used but that may change if plans go ahead to cover the seats with the Kerr Reid Stand from local rivals St Mirren’s old Love Street ground. 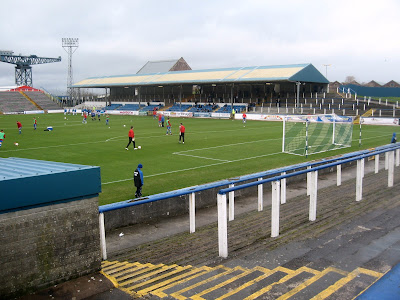 I arrived at Cartsdyke rail station at 2.20pm. The ground is only a five minute stroll away so I had time to have a good look around before heading onto the terraces early, to take my photographs before the Scottish Division One match with Hamilton Accademicals.

The home side had a nightmare first half; lucky to be only two goals behind at the break as the Accies constantly tore through the home defence like a spoon through jelly. After a spell of early pressure the opening goal arrived in the 10th minute, a cross from the left fell to McShane to fire the ball home from just inside the box.

The visitors were wearing a replica Brazil strip as their away kit and the second goal had a touch of the Brazilians about it, as Andy Ryan unleashed a 35 yard daisy cutter of a shot which totally caught Stewart by surprise, as the keeper’s desperate dive was made just as the ball hit the back of the net.

Morton improved in the second half but never seriously troubled the Hamilton defence, until grabbing a late consolation goal through David O‘Brien on 85 minutes, latching on to a flicked header to run through on goal before poking the ball under the ‘keepers body.

The home fans were naturally unhappy with their teams display and booed their side off at the end of each half and I don’t blame them, they made Hamilton look like world beaters in the first 45, it actually was just like watching Brazil. 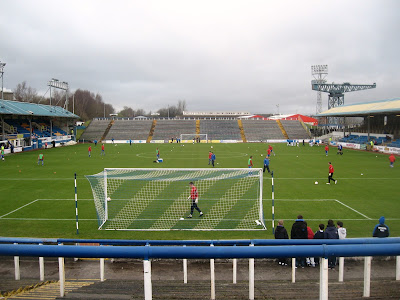 After the game I headed straight back to Glasgow, having an hour to kill before catching train number 5 in a series of 6. I spent the time look around music stores, naturally going to ‘Spoons for a drink and calling to a takeaway for a fish supper(that’s fish & chips to you Sassenachs)

I caught the 1840 Virgin train to Carlisle, hoping it would reach my destination early as it was due to arrive at 1946 and there’s a Newcastle train at 1941, with the next one not until 2120. I was hoping one train would arrive early and one would depart late, however they were both late, I arrived in Carlisle at 1948 but the Toon train was still at the platform running 9 minutes late so luckily I caught it with seconds to spare, meaning I was back home at Gallowgate View earlier than expected.

I had an excellent day when everything ran like clockwork, the six different train journeys knitted nicely together which made the whole day more enjoyable and hassle free. The only spoiler was the typical west of Scotland weather; damp, breezy and very cold, but I’ll not be making that mistake again as I’ll be fitted up in thermals and scarf when I head further north for another Scottish one-two next week. 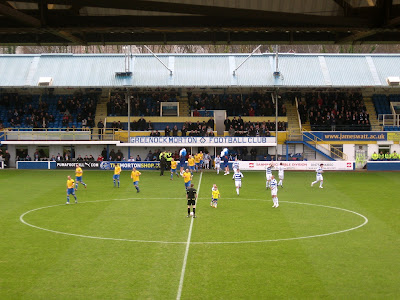