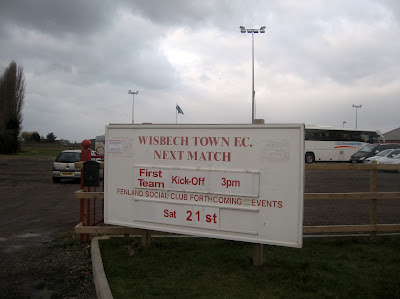 Away trips with Dunston in the FA Vase are amongst the highlights of my season, and I once again I enjoyed a good day out with the Fed Lads for the 4th Round clash at Wisbech Town.

We departed the UTS Stadium at 9am and after two (one would have been sufficient) stops we arrived in the Cambridgeshire town at 1.30pm. There was much debate over what today’s destination was actually called. I’ve always thought the town was pronounces as Wiz-beck, however my travel companion Lee Robbo declared it’s Wiz-beach, which was later confirmed by the locals. However if it is Wiz-beach then where is the A and where’s the Sea? (Did you C what I did there?)


Wisbech is a market town and inland port on the River Nene in the Fens of Cambridgeshire. The town’s main feature is Wisbech Castle built in 1071 by William I, which in the late 16th century became a notorious prison. Amongst those inmates were political Catholic priests and bishops, many of which died due to the jails unhygienic conditions. The Norman castle was destroyed in a devastating flood in 1236 and has been rebuilt several times throughout the centuries. 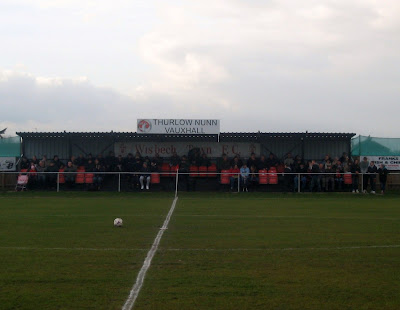 On arrival the club stewards pointed us in the direction of the nearest boozer. The ‘Black Bear’ was just a short walk away, so we also had time for pint in ‘The Locomotive’(Should be renamed “The Filthy Looks Saloon”…Eddy) before heading back to the clubhouse. As I waited to get served at the bar, I overheard one of the home supporters making an disparaging remark about people who live in the top end of the country, which quite frankly annoyed me. After travelling for over 4 hours and 200 miles this isn’t the kind of welcome I’m used to, and that I would expect at a respectable non-league club. I made the culprit aware that I was unhappy about the incident then disregarded it - determined to see a Dunston win which would wipe the smile of his smug face.

Wisbech Town formed in 1920 after the merger of three local clubs, originally joining the Peterborough & District League which they won on five occasions during the 1920’s and early ‘30s. The club formed a Limited Company and turned semi-professional in 1935, progressing to the United Counties League, becoming champions three times after the Second World War. In 1950 The Fenmen switched to the Eastern Counties League before joining the Midland League two years later.


In 1957-58 they reached the second round of the FA Cup, beating Colchester United 1-0 in the first Round, coupled with achieving promotion to the Southern League after finishing league runners-up. The club played within the Southern League set up for twelve seasons until returning to the Eastern Counties League in 1970.
Wisbech finished runners-up and won the League Cup in their first season back in the ECL and won the double the following season and lifted the league title again in 1976-77 and 1990-91.


In 1995-96 the club reached the first round of the FA Cup for the first time since 1966 and also finished second in the league winning promotion to the Midland Division of the Southern League. The club continued to produce good performances in the FA Cup reaching the first round again in 1996-97 and the following season they reached Round Two, losing 2-0 at home to Bristol Rovers.
Town had a second spell in the Southern League for five seasons until returning to the Eastern Counties League in 2002. 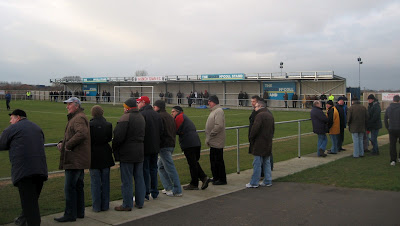 Fenland Stadium is a relatively new ground, opened in August 2010. The club previously played on several different grounds until moving from Harecroft Road in 1947 to Fenland Park, a former orchard in Walsoken. The record attendance at their former home was 8,044 against local rivals Peterborough United in August 1957.

Wisbech played there final game at Fenland Park in September 2008 and secured a temporary move to Outwell Swift's Nest ground after installing a seated stand, floodlights and terracing.
Construction began on the new 9-acre site ground in January 2010, with the first match on August 14th for an FA Cup extra-preliminary round tie against St Andrews which The Fenmen won 5-0.
The 118-seater stand which relocated from its brief home at Outwell is a basic structure filled with red seats. The stand is situated at the far side and is flanked by open hard standing. Behind each goal are fully covered single step terraces, named the Spicer McColl Stand and the Fenland Fire Stand.
Next to the turnstile entrance is the main building block which provides a large clubhouse, changing rooms and refreshment bar. The near side also provides more terrace space and the team dugouts. There’s also a club shop in one corner(£4.50 for a pin badge!) and the ground is finished off by a set of thin six lamped corner floodlights. 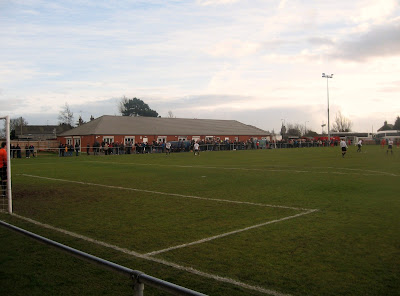 The Fenmen’s best performances in the FA Vase came in the mid-80s reaching the semi-final stage two years running. In 1984-85 they lost to Halesowen Town in a semi-final replay after a draw over the original two legs, and then the following year they again missed out on Wembley losing out to Southall. If The Fenmen are to progress towards the later stages in this year s competition they’ll have do it the hard way after this 4th round tie finished all square after 120 minutes.

Wisbech deservingly lead at the break after a disappointing first half performance from the visitors. The goal arriving on 25 minutes when a low cross from the right was sliced home by Nick Davey finding the roof of the net.
The Geordies produced a more positive performance in the second half, as they turned the match around courtesy of two scrappy goals. A free kick from 25 yards was crossed to the far post where Young nodded back across goal, where Bulford was on hand to get a faint touch that wrong footed the ‘keeper. Then on 76 minutes a free kick from the left from McAndrew, missed everyone and found the far corner of the net, although initially I though Swailes got his head on the cross.
Dunston looked set for a place in the fifth round but on 81 minutes it was all square, Matt Lunn picked up the ball on the right and darted into the box, then from a tight angle his cross shot found the top corner, if he did mean to shoot (I couldn’t tell from behind the opposite goal) it was a great goal to take the match into extra time.


The hosts almost took the lead after the restart hitting the foot of the post, but extra time was dominated by a monsoon which swept across the pitch which limited any clear cut chances and a crucial winner for either side. On 110 minutes a game which was littered with yellow cards produced a second booking for Michael Dixon, but Dunston’s ten men comfortably held on, which means The Fenmen will have to do the reverse journey to Tyneside next Saturday.

Unfortunately I’ll not be in attendance next week, but I can guarantee that followers of Wisbech Town can look forward to an enjoyable and hospitable afternoon at the UTS Stadium, because that’s just the way we are, as we understand how to treat visitors to our part of the world. 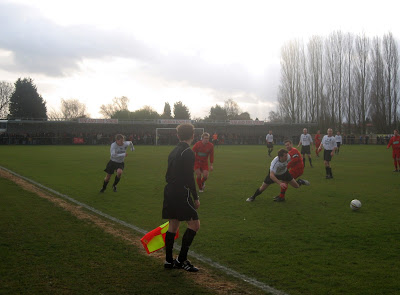 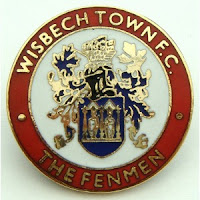 Sorry you were made to feel unwelcome shaun. Sounds like you bumped into the 'Town Idiot'.
There should be quite a few of us coming north next Saturday and looking forward to putting a few quid across your bar and sampling a North East Welcome

Cheers Steve.
Enjoy your vist to Tyneside, I'm sure you will. All the best!

I thought the club and stewards were great and very helpful but the Wisbech supporters behind the away goal were a disgrace and you'd think the club would do something about it, most horrible bunch of ignorant foulmouthed supporters i've ever come across in 21 years of following non league football.

I actually think there was the right mixture of patisan rivalry and friendly banter down there, though some of the locals seemed to have trouble understanding English! I really enjoyed the atmosphere. The mob behind the goal were rather tame I thought, compared to Spennymoor, Bishop Auckland etc in our league. Looking forward to a better performance on saturday...

I think your being very harsh on our fans ... after all this is football and you get a lot worse fans up and down the country just look at the trouble down the road from us in the semi finals last year. We are a passionate set of supporters who got behind our team and tried to put the other team off(which is what happens). Your fans came down our end and we welcomed them and had some good banter with no hint of trouble so I do think you are over reacting somewhat.

As one of those disgraceful Wisbech fans behind the goal i resent the fact that anyone should infer that my foul mouth was even attempting English. I only communicate in FEN.......furthermore I shall be at Dunston on Saturday abusing your goalkeeper in foulmouthed Fen.(The Lad had a good game and I must say remained pretty much unflappable despite the abuse poured on him. Welldone son !)That is providing is mother is not present in which case i will do my best to controll myself and my foulmouthed neanderthals.

I recieved this email from one of the 100FgC based in CAMBRIDGE.

I have just read about the latest ground you went to at Wisbech, the sort of treatment you experienced from the locals is nothing out of the ordinary they seem to think unless you come from Wisbech you are unworthy. I come from Cambridge only a few miles away and have been there(the Old Ground) on a couple of occasions and each time I haven't had a very friendly welcome, the sort you get at most Non League grounds.

As a Wisbech lad now living in Longbenton I'm really looking forward to the game on Saturday as I don't get to see us play very often and it's great the game being on my doorstep.

Couple of things, Shaun. Firstly, it's a shame you had a bad experience in the pub, I'm afraid there are individuals in the town (as indeed is the case in any town up and down the country) that live in the dark ages in terms of attitudes. Secondly, I think Wisbech dropped it's 'a' a couple of centuries ago, possibly when the Dutch engineers came over and drained the Fens (as a result Wisbech is now actually quite some distance further from the sea that is used to be). This is what I remember from school anyway, so don't quote me on it!

Brian, as for the supporters, as far as I remember Wisbech fans have always tried to make it 'hostile' for the away 'keeper and this can sometimes be an advantage for us. I'm not condoning the language but rivalry and chanting has always been a part of football and adds to the atmosphere in my opinion. Our goal highlight video for the home game picked up some choice langauge from one of the Dunston fans (or could have been the manager) so it works both ways.

Here's hoping to a cracking game on Saturday, looking forward to it.

As Shaun from Cambridge said, some grounds make you feel very unwelcome. I'm sure that wouldn't happen if you were a Newcastle fan visiting Sunderlands ground? No-one condones foul language and despite a small group who kept shouting "Dunston agro", the day was a friendly affair, or at least, it was around the ground, if not behind goal. There's a fine line between passion and over-exuberance. As for the 'welcome' at the pub, locals get the same unless you are a 'regular'!