﻿On this very day in 1988 as a bright eyed and bushy tailed shy young lad, I made my seventh attempt at permanent employment, crossing the office threshold for the very first time. I marked this 24 year anniversary and the fact my working career has stagnated with a day on the lash in one of my favourite drinking cities – York, incorporating of course another new ground visit at nearby Selby Town. 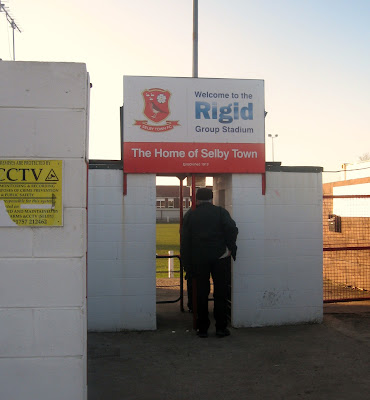 Historically a part of the West Riding of Yorkshire, Selby is a town and civil parish in North Yorkshire, situated 12 miles south of the city of York, along the course of the River Ouse. Historically the river was part of the town’s large shipbuilding industry and a thriving port due to the Selby Canal, which brought trade from the city of Leeds.


The main feature of the town is Selby Abbey, founded by Benedict of Auxerre in 1069 and one of few surviving abbey churches of the medieval period. Its main feature is the 14th century Washington Window which shows the heraldic arms of the ancestors of America’s first president George Washington. 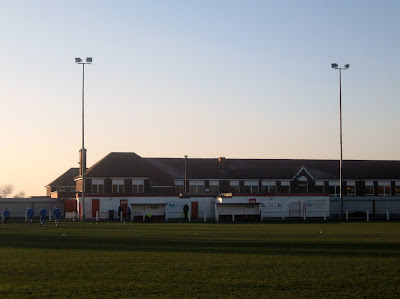 Selby Town formed in 1919 and the following year entered the Yorkshire Football League as founder members. The club were ever present throughout the history of the Yorkshire League before it became part of the Northern Counties East League in 1982. During the league’s 62 year history ‘The Robins’ were champions on five occasions, three times in the 1930s and successive seasons between 1952 and ’54.
They also progressed in the FA Cup during this decade, reaching the 1st Round in 1953-54 when a club record crowd of 7,000 witnessed the clash with Bradford Park Avenue, and the following season were knocked out at the Second Round stage by Hastings United, the longest cup run in their history.
Selby won their first honour in the Northern Counties East League in 1995-96, lifting the Division One title and have remained in the league’s Premier Division since,with there best performance as runners-up in 2004-05. 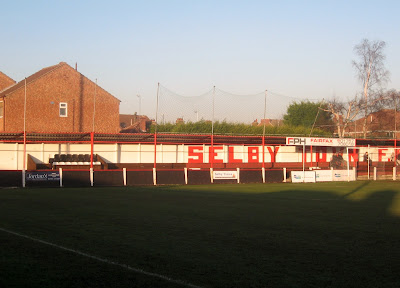 The Robins originally played at the James Street Recreation Ground, known as The Bowling Green, which had also been home to both Selby Mizpah and Selby FC at the turn of the century. The club moved across town to the Flaxley Road Ground in 1951, opening in August with a local derby clash with Goole Town in front of a crowd of over 4,000.

The ground is open terracing on three sides with a covered seated stand behind the north goal. The stand has the club name in large red letters on the white back wall and has three rows of wooden block seats with a cordoned off section of 16 seats set aside for club officials and guests.
There is a small covered stand added directly behind the opposite goal, with the team dugouts and changing rooms at the far side. Next to the turnstile entrance is the clubhouse which was opened in the late ‘60s and is quite spacious with a selection of hot food and drinks.
There's a set of tall floodlights on each side which were installed in 1994 and as part of a three-year sponsorship deal, Flaxley Road was renamed the Rigid Group Stadium from August 2010. There’s plans afoot to move to a brand new Conference-standard stadium on East Common Lane next to Selby College. 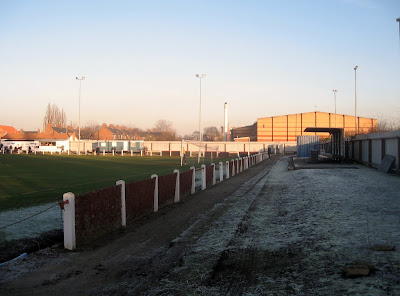 The Robins stretched their current run of successive defeats to eight games and remain rooted at the bottom of the NCEL Premier Division, as a goal either side of half time secured a comfortable win for Staveley who strengthened their position at the top end of the table.
The visitors were awarded a penalty five minutes before the break when keeper Barford brought down Barraclough with Ryan Damms making no mistake with the spot-kick. The points were assured on 54 minutes, when a nice exchange of passing was finished off with a neat chip over the keeper from Simon Barraclough, to move The Welfare into second spot in the promotion race. 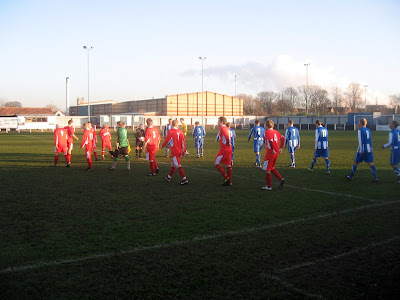 ﻿To break up my journey to Selby I enjoyed a canny pub crawl in York, a city where your spoilt for choice as far as a decent pint is concerned. I started off with breakfast and a pint in the Punch Bowl, then called into Brigantes, Last Drop Inn, Three-Legged Mare and the cities oldest pub Ye Olde Starre Inne.


I arrived in Selby at 2.10 and the Flaxley Road Ground is a 10 minute walk to the station, so I headed straight to the clubhouse for a pint and a read of the match day programme, which had an interesting feature inside titled ’On this day… 14th January.
The many landmarks on this particular day include Zsa Zsa Gabor getting her leg chopped off(2011) The Simpsons premiered on Fox-TV(1989) Roy Castle breaking a tap dancing record on the Beeb(1973) and the Sex Pistols final concert in 1978. Another personal milestone which could go on that list is in 1988 when I began working for one of the world’s biggest communications businesses, an occasion I marked by not actually being in the f***ing place but instead spending a great day doing the things I like i.e. enjoying my football ground hobby and a day on the lash.