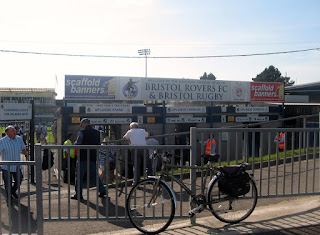 For the second week running I ventured across to the opposite side of the country, heading from the north-east to south-west for my first ever visit to Bristol Rovers. 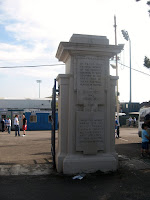 Over the years I’ve seen The Pirates in action on numerous occasions, but I’ve never seen them play as hosts. I did intend to visit Eastville in 1980, but at the time the club were sharing at the home of their City rivals after the South Stand was destroyed by a fire.
Newcastle played at Ashton Gate in successive away matches early in the season and we decided we would rather make the 600 mile round trip to Bristol to see the landlords rather than the tenants play at Ashton Gate.

I also missed out on watching Rovers play at Twerton Park in 1992, as I was on a beer, sex and souvlaki holiday on the Greek island of Rhodes. The Magpies made a blistering start to the 1992-93 season, and a 2-1 win gave United their fifth in a sequence of eleven consecutive wins at the start of that season. On that sunny afternoon the Toon were led out by a 5 year old mascot, who at the time was visiting his 13th ground and some 15 years later became Squad#79 in the 100FgC. 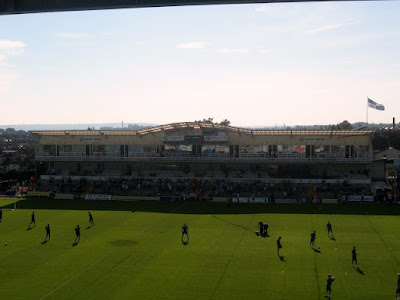 The customary early start for your truly, which meant getting up in the middle of the night and walking across to the town via the High Level Bridge to Central Station. I boarded the 0645 Cross Country service to Plymouth, arriving at Bristol Temple Meads station at 1145.
Bristol is the sixth most populated city in England, built around the River Avon with a short coastline on the Severn Estuary, which flows into the Bristol Channel.
Historically the city was an important port, handling trading goods to the likes of Ireland, Iceland and Gascony and became a centre for shipbuilding and manufacturing. Bristol’s chief sea port has a long history in trade, where deals were personally struck in the former trading area around The Exchange in Corn Street over bronze trading tables, known as "The Nails". It’s said that maybe this is where the expression "cash on the nail", meaning immediate payment, may have originated from.
Bristol Rovers FC originally formed in September 1883 as Black Arabs, in association with the Arabs rugby club, initially playing friendly matches on a pitch at Purdown in Stapelton.

The following year the club were renamed Eastville Rovers playing at Ashley Hill, Horsfield Downs and also the Ridgeway in Upper Eastville. In 1897 the club joined the Birmingham & District League and finally found a settled base at the former ground of Bristol Harlequins RC in Eastville.

The renamed Bristol Eastville Rovers became a professional outfit in the 1897-98 season, dropping the middle name in February 1899, before joining the newly formed Southern League where they played until 1920, when they were accepted into the Football League.

Eastville Football & Athletic Ground was purchased for a measly sum of £150 and remained Rovers’ home for the next 89 years until 1986, when financial problems resulted in the club being forced into a temporary ground share at Twerton Park in Bath. 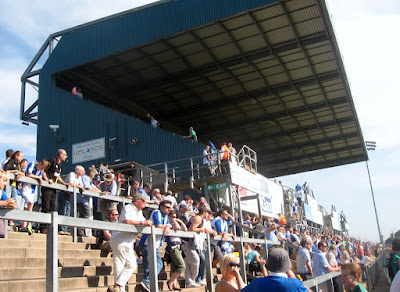 Bristol Rovers were tenants at Bath City for 10 years until taking up another tenancy with Bristol Rugby Club in 1996 at the Memorial Ground in the Horsley area of Bristol.The stadium was opened in September 1921 on an area of land named Buffalo Bill's Field that was previously occupied by allotments. The ground is named in honour of the Rugby Union players from the city that died during World War One.
Bristol RFC redeveloped the ground, replacing the old Shed with the Centenary Stand to mark the club's 100th anniversary in 1988 and the West Stand, which had stood since the ground was built, was demolished and replaced in 1995. The Memorial Ground was also renamed with the Stadium suffix around this time.
The rugby club suffered major financial difficulties after relegation from the Premiership in 1998, resulting in Bristol Rovers taking over the ground ownership. The roles reversed with the rugby club becoming tenants in their original home.
On one side is the striking looking West Stand, which has a unique look to it, split into three sections with 10 hospitality boxes at the top, terracing at the bottom and 710 white seats in between. There’s also a TV gantry at the top with an electric scoreboard on the gantry’s facade. Next to the stand on the other side of the players’ tunnel is the South West Stand which is a small covered terrace, which is used as the family enclosure with space for 720 spectators.
At the opposite side is the Uplands Stand which has covered seating to its rear and terracing at the front. The stand is quite high in height with a good view over Bristol, one of my colleagues in the press box mentioned it’s the coldest stand in the country, my reply being that he mustn’t have been to Gateshead Stadium! The stand is prominently blue with staircase access to the seats at the sides and the front. There is open terracing at each side and the dug outs are located in front, which means that team staff have to trail across the pitch to the changing rooms in the West Stand.
The South Stand was originally erected as a temporary stand, having just over 1,000 green seats with a gazebo type covering, decked out in blue and white patched squares. The stand runs for just over half the width of the pitch and is shared with the away supporters.
Behind the opposite goal is the Blackthorn North Terrace, which is a covered terrace for home supporters with a capacity of 3,710, which brings the overall stadium capacity for football purposes to 11,750. 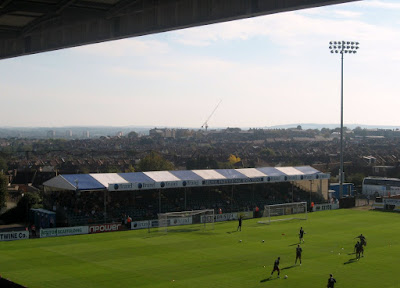 The Carrot Crunchers Derby or better still; The Cider Swiggers Derby was won by the club from 40 odd miles up the road, who produced a solid and confident away performance, giving the Gashead fans a frustrating afternoon.
In the opening half Cheltenham looked dangerous when pushing forward while Rovers struggled to string two passes together, the only threat coming from Zebroski, who created a couple of half chances for himself but failed to hit the target.
Town took the lead on 34 minutes. Kaid Mohamed ran half the length of the pitch before poking the ball home, then within ten minutes the lead was doubled when Luke Summerfield thumped the ball home from the edge of the box from a corner kick.
The three points were guaranteed just after the restart. The Cheltenham players must have worked hard in training on corner kick routines this week, this time the corner was
played to the near post where James Spencer flicked the ball home for another clever goal.
Rovers pulled a goal back on 64 minutes. The ball was cleared from a corner kick, which fell nicely for Lee Brown, his first time shot from 25 yards taking a slight deflection, giving the keeper no chance.
The home side rallied to get back into the game but it never looked likely as Cheltenham had chances themselves to catch the Rovers defence on the break. Overall a good game after a slow start, maybe the injury to Danny Woodards, stretchered off in the opening minutes knocked the stuffing out of Rovers, but take nothing away from The Robins, a good performance so the cider will be flowing on the edge of the Cotswolds after this “derby” win tonight. 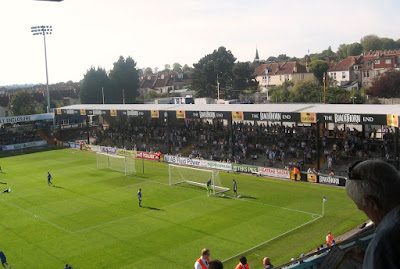 To be honest I wasn’t really looking forward to this trip. I’ve got nowt against Bristol, but a five hour each way journey didn’t give me a tingle in the loins or have me rubbing my hands with glee. I had problems booking decent trains with the only sensible journey home being the 1740 from Bristol Parkway, changing at Derby, so the time span from match to train station was tight.
On arriving I had time for a couple of pints in the city centre, ticking off a couple of ‘Spo
ons at The Knights Templar and Commercial Rooms, as well as the GBG listed Old Fishmarket.
I wanted to get to the ground early so I decided to head to Parkway station, then get a
taxi so I could book my return in advance, arranging to get picked up at the bus stop on the end of Filton Avenue at 5pm.
After the game the taxi arrived spot on time so I was safely back at the station for 5.15pm. Then as I waited for my train, I received a string of text messages from an irate taxi driver informing me he couldn't wait any longer and wondering why I hadn’t shown up, so his fare had been “bumped” by a rival taxi firm.
On the long journey back home I had half an hour to spare between connections in Derby, so I had time to visit the excellent Brunswick Inn on Railway Terrace. The pub has a huge choice with 16 handpulls with a selection from its own Brunswick Brewery, unfortunately I only had time for a quickie before catching the train back to Newcastle.
I’m delighted to get this ground ticked off and to finally see Bristol Rovers play a home game, I enjoyed my brief visit to Bristol and I’ll hopefully return one day for a much longer stay. I finally arrived back home at 11pm, my train crossing the Tyne via the High Level some 16 and a half hours since I walked over the same bridge in the early hours of the morning when this daytrip kicked-off.