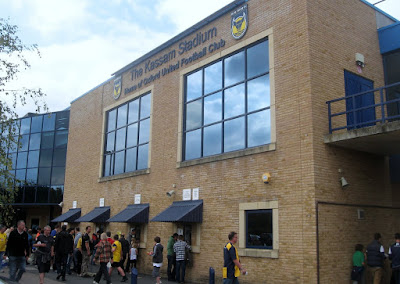 My main objective for this season is to finish off the current 92 before the arrival of our brutal winter which looks set to force an unwanted mid-season break. So for my latest solo train journey, I boarded the 0622 Cross Country train service to Reading, alighting in the picturesque city of Oxford.
The city is renowned for its famous university, the oldest in the English speaking world. There are two rivers flowing through the city, the Cherwell and the Thames which meets at the south, this stretch of the Thames is known as the Isis. The Oxford skyline demonstrates every English architectural period since the arrival of the Saxons, with its churches and university buildings as well as the mid-18th century Radcliffe Camera.
Oxford is known as the "city of dreaming spires", which is credited to poet Matthew Arnold, however the term I would use is “city of bloody good bands” with three of my favourite groups over the last 20 years, namely Radiohead, Ride and Supergrass, formed out of Oxford 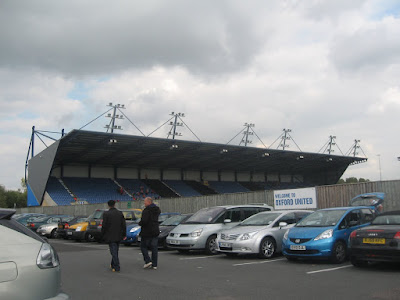 A vicar and a doctor met in a pub (no this isn’t the beginning of a joke) in 1893 and formed Headington FC, using players from the Headington Cricket Club. The club added the United bit to their name the following year and later joined the Spartan League.
In 1960 they were renamed Oxford United and within two years were in the Football League after winning the Southern League title for a third time.
The golden era for the U’s was during the 1980’s, winning consecutive league titles and promotion to win a place in the top tier of English football in 1985, then lifting the ’86 League Cup with a 3-0 win over QPR in the final at Wembley.
The club were relegated to Division Two in 1988, which started an 18 year downward spiral that ended with relegation from the Football League in 2006. This was the first time in the history of English football that a team which had won a major trophy were relegated to the Conference.
After a four years gap the club regained their League spot through the play-offs, overcoming York City 3-1 in the final at New Wembley. 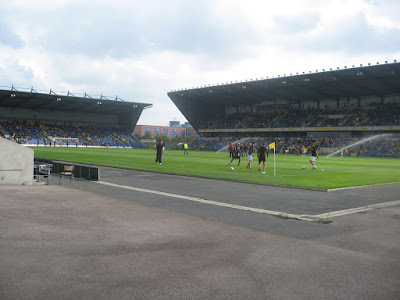 Headington United started life at the Quarry Recreation Ground, before moving to Wootten’s Field in 1898. During the early part of the 20th century the club led a nomadic existence, playing on various pitches in and around Manor Park including a return to the Quarry, before securing land on Matlock's Field in 1925 which became known as the Manor Ground.

The Club announce in 1995 that by the end of the decade they were moving to a purpose built stadium at Minchery Farm in the Blackbird Leys area of the city, leaving behind Manor Ground their home for the previous 76 years. 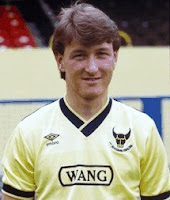 I visited the Manor Ground twice during the 1980’s with Newcastle United. Both matches played midweek under lights in the same competition; the League (Milk)Cup, both resulted in disappointing and inept displays from the Magpies, by and large two unforgettable nights of misery.
The first tie took place in 1983, goals from Neal Whatmore and Andy Thomas gave Oxford a two goal lead at half-time with a late consolation goal from Keegan not enough to give the U’s a 3-2 aggregate win.
I was back again two years later and yet another pretty shitty night. The only highlight being we had time for a couple of pints before kick-off, which lightened our moody slightly before a 3-1 hammering as Oxford were on route to Wembley. Trevor Hebberd scored and another two from Thomas, which must have prompted Newcastle to fork out £100,000 for his services the following summer.

The new stadium meant the club left behind their spiritual home in Headington for the first time. Building work began in the summer of 1996 by Taylor Woodrow, but due to financial constraints construction ceased in December 1997.
Following the arrival of Firoz Kassam as chairman in 1999 work on the stadium recommenced in February 2000 by Birse Construction. The new owner ironed out the on-going legal problems, cleared a large percentage of the debt and squared up financially with Taylor Woodrow.
The ground is owned by the Firoka Group Company and was designed by ACP Architects with the overall construction costing £15m. The first game took place on the 4th August 2001 with a friendly against Crystal Palace, with the first competitive match the following week against Rochdale in the Third Division. United lost the game 2-1 in front of a crowd of 7,842 with Jamie Brooks scoring the Oxford goal. 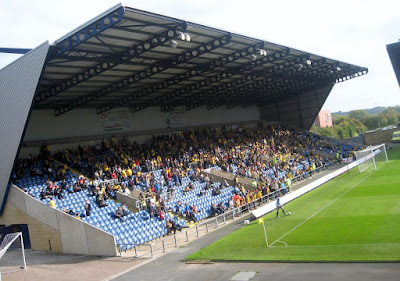 The stadium has three separate all-seated cantilever stands filled with blue seats with an open end on the west side onto the car park and Vue complex.

The main stand is the South Stand, which has a capacity of 4495 over the two tiers, which are split with 28 executive boxes in between. The central façade wall is decorated with significant dates in the clubs history, similar to what they’ve done at the Emirates, but done in a more discreet way and not an arrogant in your face way like the Gunners.

Opposite is the North Stand which is similar in size and design, with just a single tier of 5026 seats, which are shared with away supporters. The stand also has floodlights mounted on the roof.
Behind the east goal is the Oxford Mail Stand which is also has a parallel appearance, but with less capacity with room for 2879. There’s also a basic electric scoreboard behind the west goal.
I do have one gripe about the stadium, which is the appearance of the walls around the turnstile areas which looks an eyesore, covered with graffiti and desperately in need of a tidy up and a good lick of paint.

The current capacity is 12,500 with the biggest attendance being just short of a full house when 12,177 witnessed the 3-2 defeat against Leyton Orient in May 2006, which sealed the clubs fate and sent them crashing into the Conference.


The spoils were shared between Oxford United and Accrington Stanley in this League Two clash, a fair result with maybe the visitors just shading it. The despondent chorus of boos from the U’s supporters on full time tells the story of a frustrating 90 minutes.
Accrington could have been three goals up before McClaren gave Oxford the lead on 35 minutes; a free kick from 20 yards took a wicked deflection to totally wrong foot the ‘keeper to give the hosts a fluke lead.
Before then, Murphy had a goal chalked off for offside after netting the rebound from a Winnard header, which came back off the post. United keeper Ryan Clarke pulled off two great saves, tipping over an effort from Fletcher, and then denying Murphy with a point blank save.
The equaliser came just after the hour mark when the ball fell into the path of Peter Murphy on the edge of the box, hitting a first time shot which nestled in the bottom left corner of the goal.
Both sides huffed and puffed for a winner but it didn’t look likely as the match fizzled out into a draw, which pushes Oxford out of the play-off positions. 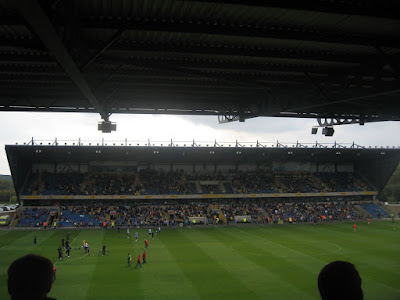 Needless to say my brief previous visits to Oxford weren’t enjoyable, so I made sure I made up for it this time, by arriving early so I could have a good toby around and a good pub crawl.
I arrived just after 1030 and headed straight to Wetherspoons for breakfast. This JDW pub is inspired by the famous Two Ronnies sketch, hence the name - Four Candles. I also frequented the Swan & Castle, Royal Blenheim, Bear Inn and Far From the Madding Crowd before catching the bus to the ground at around 2pm.
The bus fare was £2.90 return and the regular service meant I was back in the town centre in good time to catch the 1807 back to Newcastle.
As soccer Saturday’s go this one was just about perfect, not only did I have an enjoyable day in Oxford, but good news from elsewhere as both my teams in black and white had good wins courtesy of hat-trick heroes.
My target to finally finish off the 92 is getting closer with just three more to go, hopefully if my plans come together then the set can be achieved before winter calls, when my footy travels grind to a temporary and impetuous halt. 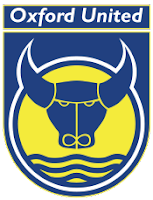