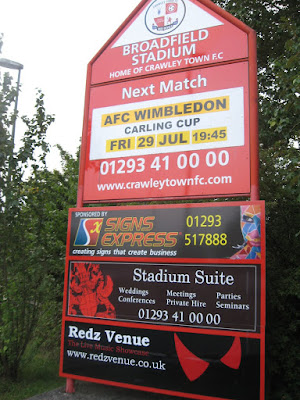 Five years after almost going out of business, Crawley Town kick off the 2011-12 season as a Football League club after winning the Conference title by a tatty field last season, 15 points ahead of fellow promotion winners AFC Wimbledon.
The two clubs renew rivalries straightaway in the preliminary round of the League Cup, the tie taking place due to relegated Birmingham City giving a bye in the competition because of their pending involvement in the Europa Cup, which also means I can quickly tick off Broadfield Stadium before the season gets into full swing.

The former market town of Crawley developed from the 13th century due to its location on the main road from London to Brighton. It served as a popular relocation for families moving out of over populated London, being designated as a new town in 1946.
Gatwick, the UK’s second busiest airport is located 3 miles north of the town, last year over 31.3 million passengers passed through Gatwick, making it the 9th largest in Europe for passenger traffic and the 12th busiest in terms of international users.
Apart from football my only previous knowledge of Crawley was being the location where The Cure, one of my favourite bands of all time were formed in 1976 by my long lost cousin Robert Smith, with Michael Dempsey and Lol Tolhurst when attending St Wilfrid's RC School. 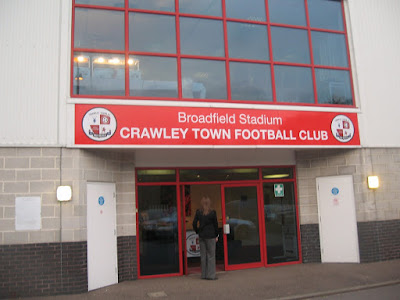 Crawley FC played in the West Sussex League after their formation in 1896 before moving to the Mid-Sussex League in 1901. They went on to the Sussex County League then the Metropolitan League in the 1950s, a decade when the Town suffix was added to their name.
In 1962 the Red Devils turned semi-professional, joining the Southern League First Division the following year. In 1969 the club had a brief stint in the Southern Premier League before eventually winning promotion again in 1983-84, where they played for 20 years until winning the title and promotion to the Conference.
Over the last few years the club have battled with financial problems, flirting with administration in the late 1990s, then in March 2006 the players and staff wages were halved with the entire squad put up for sale, going into administration in June of that year with debts totalling £1.4m, due to the financial plight of club benefactors the Majeed brothers.
The struggle continued with the Red Devils hours from liquidation in August 2006, but the club survived, confirmed clear of debt in May 2007. Another setback came in February 2010 as they faced a winding up order in the High Court due to money being owed to HMRC, however the case was later dismissed by the High Court as the club proved the debt had been paid. 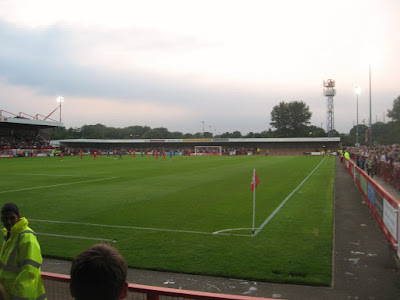 Last season saw a complete financial turnaround, totally transformed from a club living on the bones of its arse to being tagged the Man City of the Conference. Mysterious and anonymous financial clout saw big money signings and under the guidance of experienced manager Steve Evans the ambitious “Project Promotion” was achieved just as the supermarkets took stock of chocolate eggs and stuffed toy rabbits.
A memorable season will also be remembered for their giant killing exploits in the FA Cup, after knocking out League clubs Swindon Town, Derby County and Torquay United, they were a width of a post away from taking Manchester United back to Broadfield in the 5th round after a brave display in front of a near 75,000 crowd at Old Trafford.


Crawley Town moved a couple of miles across town to Broadfield Stadium, after 48 years at their previous home Town Mead which was sold to developers in 1997. Broadfield is the club’s sixth ground having previously played at Malthouse Farm, Victory Hall & Rectory Field, Yetmans Field and Ifield Recreation Ground.
The council owned stadium has a capacity of 4,996, dominated by the main West Stand which has a single tier capacity of 1,150 red seats. The stand looks more attractive by the triangular designed red tubing which supports the three floodlights on the roof. Spectator access is gained via staircases at the front and there’s also Perspex windshields at each side.
The North and South terraces’ are both fully covered with the roofs curving around in the corners to meet the main stand. At the far side the open East Terrace has a basic centrally positioned electric scoreboard and three floodlight pylons.
The record attendance is 4,522 against Weymouth in the club’s 2003-04 title winning season, witnessing a 2-1 victory against the eventual runners-up. 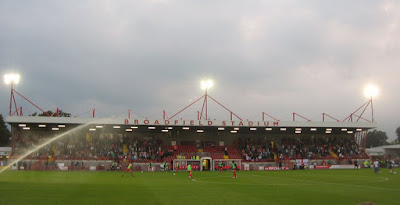 Crawley Town is now pushed into the same envelope as previous ground visits to Norwich City(19- 9-81) and Crystal Palace (29-11-97) as journeys from hell when circumstances beyond my control has meant I’ve missed the kick-off and a good chunk of the match.
This trip was split into the two parts. The first leg of the journey was with the breadknife and kids, as we were staying with family in Lincolnshire for the weekend, then Mariners fan, Squad#88 and fellow radio star from The Completists - Graham Precious picked me up in Grantham at 3.30pm.
The drive south takes around three hours, allowing plenty of time to negotiate the nightmare on tarmac; the M25, however Graham got caught up in heavy traffic in Lincoln so didn’t turn up until 415pm, but there was still sufficient time left to get to the match and maybe have a pre-match pint.
The journey was going swimmingly until we came to a sudden halt in the middle of the M25, roadwork’s stretching 10 miles on the north side of the Dartford Toll Crossing meant it took a good one and a half hours to do the last 13 mile before crossing the Thames.
When we finally got to the toll, the digital display clock at the cash point read 7:38 in bright red digits. It was as if the clock was taunting me, telling me we still had a good 40 miles left with only seven minutes until kick-off.

Full marks to Graham though, his bully-boy tactical driving meant he made up good time, reaching the stadium just as I heard a loud cheer and the match MC announcing that the scorer of AFC Wimbledon’s goal is Luke Moore.
We discovered we had just missed the first goal of the game, but after we finally settled on the South Terrace, I overheard a Crawley fan saying he wasn’t impressed with his team’s performance and also stating what a poor game it had been, maybe the players were waiting for our arrival because the match I watched was a cracking game with both teams hungry for a place in the First Round of the League Cup.
Crawley equalised on 38 minutes when a left wing cross found Akdan in the box unmarked with time to rifle in a right foot shot into the far corner, only for Dons new summer signing Jack Midson to restore the advantage straight from the restart.
It was nice to see a goal from Torres, but this was Sergio not Fernando, who again drew the home side level, seizing on a loose ball before placing his shot with precision past keeper Brown.
Both teams went all out for a winner and it was last seasons top scorer in the Conference, Matt Tubbs who grabbed it with a superb piece of skill, showing great control to bring the ball down on his chest and volley the ball home to book a date with Crystal Palace at Selhurst Park on the 9th August.
Broadfield Stadium will be a welcome addition to the Football League and I can see both clubs doing well this coming season and I wouldn't be surprised if Crawley Town manage to repeat the feat of Stevenage last term, by winning promotion in their first season in League Two. 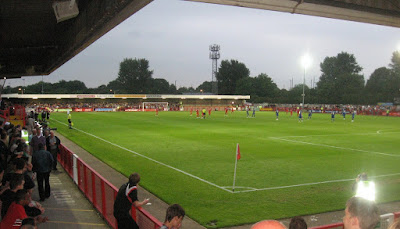 After the game we went to the club shop for a programme and after a bit of a wait, we were informed they had sold out, but they’ll most likely do a reprint. I also tried to get a pin badge but they had none of these either, reason being they had to send them back due to a spelling mistake.( Crowley Town or Red Evils perhaps?…Eddy)
The return journey went smoothly, back at my weekend headquarters at Ann and Malcolm’s for 1215am. Malc has built his very own pub at the top of his garden which is named(by yours truly) ‘The Man Cave’ I had a quick pint of Guinness before finally going to bed (which was inside the man made pub) pleased I’d quickly ticked off the newcomers to the 92 and I also having another match to look forward to at Gainsborough Trinity later in the day.

The M25 is a disgrace, got stuck on there for an hour on Saturday on my way to Godalming v AFC Wimbledon and then Havant and Waterlooville v Real Betis