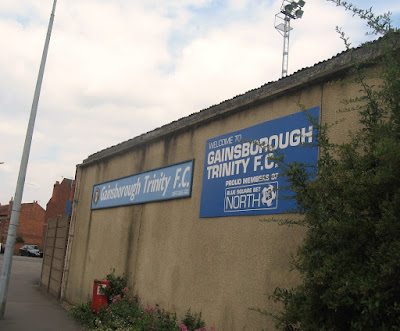 The Northolme has been high on my list of “T’do” grounds for quite a while now. The once former Football League ground has an uncertain future with talk of the club looking to relocate. The favourable location is said to be a community based facility on a 20 acre site on Corringham Road. This project seems on the backburner at the moment, the value of the property has rising since the initial interest from the club and could be earmarked for a housing development, although the club are still on the look out for suitable sites. 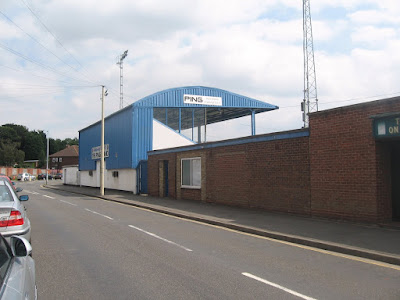 Gainsborough is a town on the River Trent within the West Lindsey district of Lincolnshire and historically one of the capital cities of Mercia during the Anglo-Saxon period before the Danish rule. In 868 Alfred The Great married Ealswitha, the daughter of Ethelred and chief of the Anglo-Saxon tribe the Gaini, and it’s from this that the town gets its name.

Gainsborough Trinity formed as Trinity Recreationalists in 1873 by Reverend George Langton Hodgkinson, the vicar of the town’s Holy Trinity Church. They became founder members of the Midlands League in 1889, finishing as champions in their second season, then twice as runners-up which gained election to the Football League 2nd Division in 1896.
The club spent 16 seasons in the Second Division, peaking with a sixth place finish in 1904-05 but after years of struggle returned to the Midland League after being voted out in favour of neighbours Lincoln City.
The Holy Blues joined the newly formed Northern Premier League in 1968 until the reconstruction of the non-league pyramid saw the club placed in the Conference North in 2004.
A couple of interesting facts about Trinity for you Google wallers. They were the first club to play the renamed Manchester United when they changed their name from Newton Heath and the club have never been relegated in their 138 year history(Unlike neighbours Lincoln City and Scunthorpe United last season…Eddy) 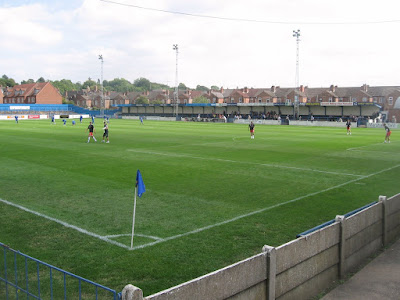 From the 1850’s the Northolme was originally a cricket ground becoming the oldest dual purpose venues in the country with several cricket clubs in the area taking up football during the winter months from the 1860’s.
A 200 seated stand was built at the turn of the 20th century on the south side, with a covered standing area added at the opposite side. The stand was replaced in 1911 and stood until the Second World War, when the ground was vandalised with both stands a victim of arson.
The ground developed during the 1930’s with the current grandstand erected after the war. The Victory Stand as it as it was originally named is now known as the Ping Stand. The stand has a capacity of 504 blue seats split into two section with a short peaked roof and three supporting pillars at the front. The teams dugouts are kept apart on each side of the stand to keep a clear spectator view. The changing rooms and Club On The Park Social Club is also on this side of the ground.
The turnstile entrance is in the corner, where there’s a covered terrace with a snack bar at one side and opposite is the club shop and MC cabin.
The far side goal is open terracing and there’s more covered standing pitch side. The cover runs nearly pitch length with four floodlight pylons, parallel with the pylons on the Ping Stand side.
The ground is nicknamed “The Chapel” and once had a capacity of 20,000 but now houses 4,304 with the record attendance of over 9,500 for a Midlands League clash with Scunthorpe United in 1948. 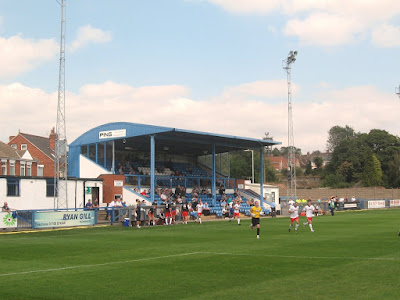 After enduring a stressful journey to Crawley Town the previous night it was nice to take a leisurely drive up from my sleepy village base near Grantham.
I again met up with my travel companion from the previous evening, Precious Grimsby (squad#88) who travelled 11 miles across from his home in Kirton Lindsey, meeting in the Blues Club, which is a really good supporters club bar, where they sell a couple of real ales. I sampled Grafters ’Over The Moon’ (4%) ***+hf
The match was a typical pre-season friendly played on a glorious summers afternoon. Grimsby took the lead after half an hour when Serge Makofo latched onto a through ball, using his pace before unleashing a left foot drive into the far corner of the net.
Trinity equalised early into the second half when a lob from half time substitute Darryn Stamp caught the Mariners keeper by surprise, before the visitors claimed victory on 66 minutes. Anthony Church netted with a brave diving header, following in on a fine save from the keeper. The goal came as a cost as the striker hobbled off injured, staggering away from the pitch as if he had just drunk 10 pints of ’Over The Moon!’ 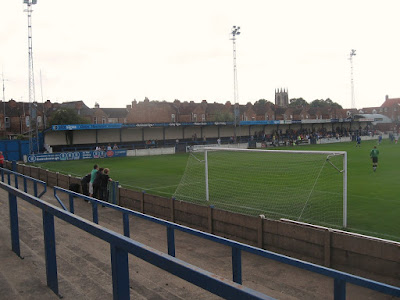 I really enjoyed my long awaited visit to Northolme. The ground is a classic and if I was a Gainsborough supporter I would be gutted to be leaving such a pleasant home. Any talk about where and when the club will relocate is all rumour at the moment and I hope that’s the way it stays, as it would be a sad day if this former League ground was to disappear for good. 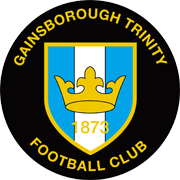 I want to do this ground, even if only to take pictures. In all likelyhood will visit on the way to Scunthorpe v Wycombe next year

Impressive ground. I can just play to the ground all day long.