Around The Alliance - part six 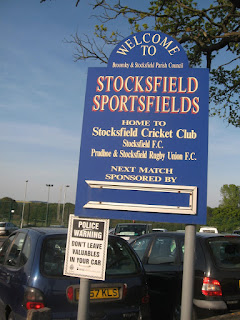 Stocksfield is a village situated on the south side of the River Tyne in south-west Northumberland, between Newcastle and Hexham.
Stocksfield Sports Ground is a large complex consisting of cricket, rugby, floodlit 5-a-side courts and three football pitches. The football club use the pitch at the far side in front of the Newcastle-Carlisle train line, which is fenced off on three sides with one side left open to accommodate a second cricket pitch, there’s also a pair of neat wooden dugouts in front of the Tyne Valley line banking.
The cricket pavilion is used for changing facilities and there’s a large car park at the entrance, although this was full due to both cricket and football taking place on the same evening.
The club formed in 2005,winning the Pin Point Personnel Amateur Cup the following year and made progress with two promotions in 2006-07 and 2008-09.
Their first season in the Northern Alliance Premier Division last term was played at the vacant Kimberley Park in Prudhoe, but the reformation of Prudhoe Town has meant a return to Stocksfield. 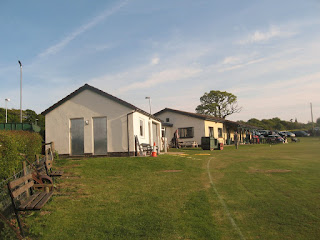 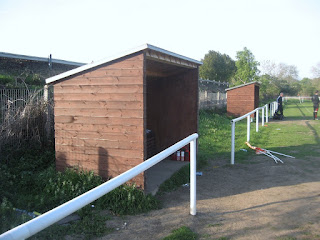 Shankhouse grabbed a well earned win with a goal in each half, with a cross-come-shot from Gustard on 13 minutes and sealing victory five minutes from time with a lovely goal from Dormand, the striker connecting with a corner kick to volley the ball home from inside the box.
Between the goals both sides created good chances, but the visitors deserved the three points, hitting the woodwork and missing a few one-on-ones which would have made the score line look more handsome. 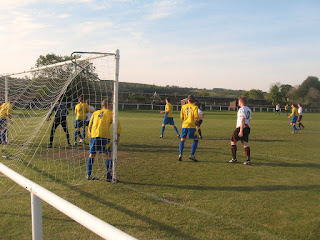 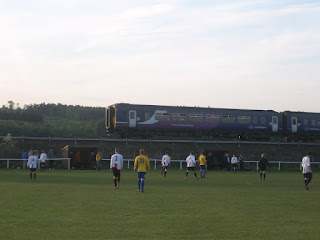 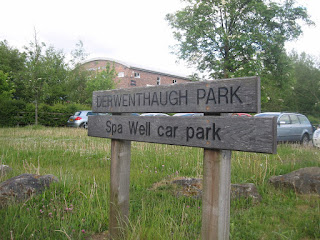 Derwenthaugh Park is found west of the Metropolitan Borough of Gateshead on At Well Road in Blaydon. The ground was built on wasteland on the former site of the Derwenthaugh Coke Works for Swalwell Juniors in 1998. The facility has two full size pitches both with dugouts, with the main pitch fully fenced with floodlights and some hard standing. There’s also a large function room with changing rooms and four floodlit astro turf 5 a side pitches.
Swalwell Juniors comprises 18 teams, made up from kids between the ages of 6 and 17. The senior side has played in the Northern Alliance Second Division since 2009 and the club also run a reserve team. 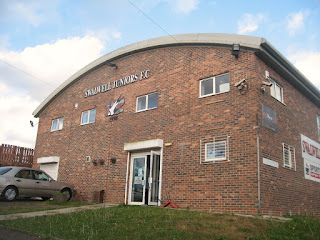 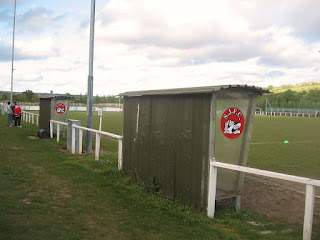 Swalwell FC played hosts to the Pin Point Recruitment Charity Cup Final, the competition gives financial support to good causes and charities in the north east.
The Charity Cup will be renamed the Bill Gardner Memorial Trophy from next season as a mark of respect to the league's long serving Press Officer who passed away in December 2010.
The final turned out to be a cracker and a proverbial game of two halves. Shields were the better side in the opening half, looking dangerous when breaking forward with their pacey strike force. They took the lead on 39 minutes when Aristote Guerin seized on a loose ball in the box then just prior to the half time whistle, a goal to grace any cup final. Tijan Kah picked up the ball wide right, outpaced the defender, pulled off a few lollipops before unleashing an unstoppable and precise drive into the top left hand corner - a tremendous goal!
So 2-0 at half time and the team in the Blyth Spartans reject strips looked set to lift the trophy, but a Glenn Caygill header on 56 minutes halved the deficit which began a great Stocksfield comeback.
Ten minutes later Scott Johnson’s hard work and persistence paid off, poking the ball home from close range before the fight back was completed five minutes from time, substitute Martin Graham finally smacking the ball into the net after an array of missed chances.
Stocksfield deservingly win the cup but it’s a shame that Shields United, having already tendered their resignation from the League couldn’t go out with a bang by lifting the trophy. 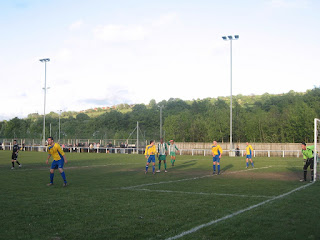 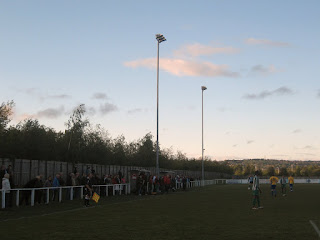 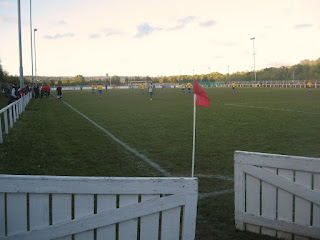 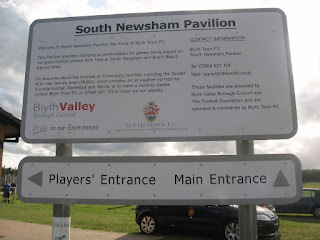 I featured Blyth Town in the third part of the Around The Alliance series in May 2008. At the time the club had problems with their pitch and were giving special dispensation from the League to fulfil their fixtures over on the South Beach pitches.
So after three years I’ve finally got around to revisiting the club at their home turf against Cumbrian based Harraby Catholic Club, the only club in the Alliance Premier who I’d previously never seen in action.
South Newsham Pavilion has two pitches, the main ground is fully railed off with a pair of Perspex dugouts. The pavilion has bar facilities and changing rooms, there’s also a 5-a-side court behind the nearside goal.
At one point I thought there was no football to be had. Harraby still hadn’t turned up by the designated kick-off time of 6.30. The team bus finally arrived at quarter-to-seven having been stuck in traffic, which meant the match was ok to k.o. at a later time of 7pm. 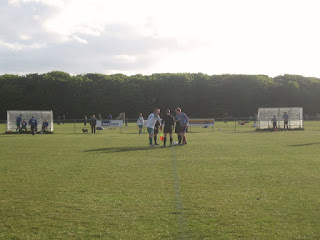 Blyth took an early lead through Hopwood with a header at the far post before an equaliser on 26 minutes, Wordsworth was left unmarked to nod home a left sided free kick.
The match was finely poised and could have gone either way but it was the home side that clinched it, Haig capitalised on a defensive mix-up to skilfully round the keeper and shoot past the covering defenders on the goal line.
Overall quite a good game, which is usually the case and it’s very rarely a disappointing affair when watching games around the Alliance. 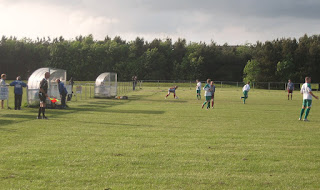 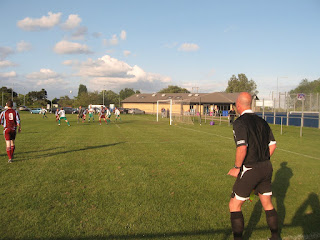 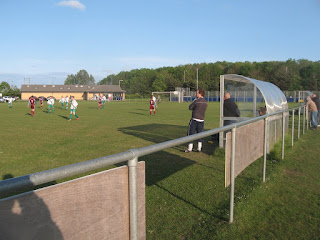