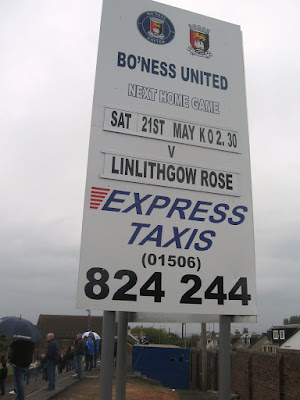 My final trip of the season was in Scotland for the big title six-pointer in the East Region Super League, probably the country’s biggest game of the day apart from that small matter taking place at Hampden Park.

I arrived in Edinburgh at 1pm where I was greeted by Squad#155 James Little who was taking me to Newtown Park, the home of Bo’ness United for the big local derby with Linlithgow Rose.
Bo'ness/Borrowstounness, is a coastal town in the Central Lowlands of Scotland on the south bank of the Firth of Forth, 17 miles north-west of Edinburgh and 6 miles east of Falkirk. Bo'ness is now chiefly a commuter town with residents travelling to work in Edinburgh, Glasgow and Falkirk, but historically was a centre of heavy industry, coal mining and a major port. 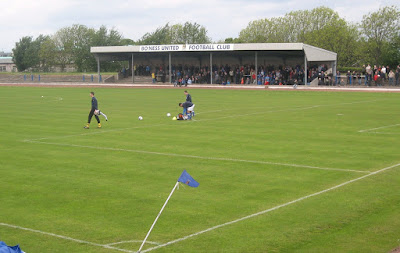 The B.U.'s were formed in 1945 when former Scottish League club Bo'ness merged with the junior club Bo'ness Cadora. The club joined the Edinburgh & District League, which they won three times in their early years as well as lifted the Scottish Junior Cup in 1948. Two further league titles in the 1950s and 1960s plus more success followed in the Junior Cup, lifting the trophy in 1976 and 1984, as well as adding four East of Scotland Cups to their list of honours.
Bo’ness were East Region Division 1 champions for a second time in 2007-08 winning promotion to the East Super League and are the current title holders. Last season the club went on to the win their first League Championship since 1969, leading the table from beginning to end, clinching the title in a thrilling final league match against their feisty rivals. 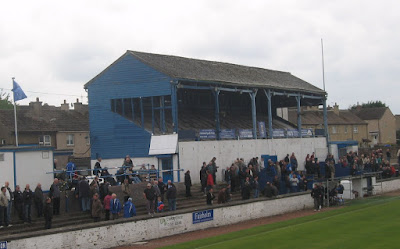 Newtown Park has always been home to Bo’ness United and has been a football ground since the 1880s. The ground has a capacity of 7,500 made up of terracing on three sides with one side of cover. The Main Stand is no longer used for spectators as it’s been declared derelict and is only used as the team changing rooms. The classic looking wooden structure had elevated seating with a standing paddock at the front with blue wooden supports and beams.
Opposite is the terrace enclosure which cost £80,000 and runs in length between the two 18 yard lines. The stand has a silver frame with the club name and crest on its fascia. The terracing behind the goal is made up of 15 gravel filled steps and at the far side is a grass bank with four crash barriers. There’s also floodlights behind each goal and the ground is finish off with a white brick perimeter wall 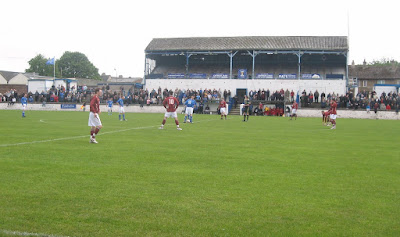 For the second successive year the two fierce rivals met with the title up for grabs, but this season it’s both clubs challenging for the league, locked on the same points with the BU's having a superior goal difference.
I must have caught Bo’ness on an off day because they didn’t look like a team at the top of the table, maybe the recent hectic schedule has taking its toll as they were comprehensively beaten by their old enemy’s from down the road.
Linlithgow took the lead half way through the first half when Nelson latched on to a deflected shot to fire home and they continued to press with some top class saves from the United keeper keeping the slender score line at the interval intact.
Two minutes after the restart Tommy Coyne capitalised on a goalmouth scramble to double the lead and from then on they were never in danger of letting the lead slip. Herd latched on to a free kick to nod home on 63 minutes and McLennan capped off a fine performance with a fine effort from a tight angle five minutes from time.
A Bo'ness victory would see them needing only a single point from their final two games to clinch the title, but this victory for Rose means that the BUs, assuming Linlithgow win their final match against Bonnyrigg, need maximum points from their remaining fixtures.

So the title race is still wide open but on the evidence of this display it’s Linlithgow Rose that look championship material. 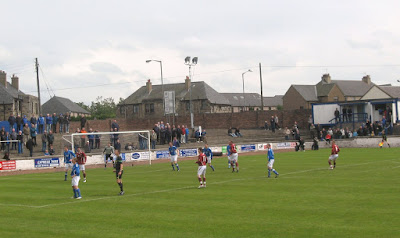 The drive from Edinburgh to Bo’ness and the return journey included a liquid stop at The Duddingston Arms in Newton. On arrival back in the Scottish capital James recommended the CAMRA award winning Halfway House where I enjoyed a lovely pint while waiting for my train. A special thanks to James for suggesting visiting Newtown Park and making it possible by chauffeuring me through the busy Edinburgh traffic.

Apparently the world was due to end on this day at 6pm, the same time as I boarding my train home meaning my demise could have happened on foreign soil! Of course this Camping balderdash was grade one bullshit, so alas this means I’ll be back next season to add to my grounds total and inform my dozen or so readers of where, why and how it was all done.
Update
The following weekend Bo'ness retained the East Super League title and will play in the Scottish Cup again next season.
They won their final game away at Forfar 2-0 whilst at the same time Linlithgow lost 2-4 at home Bonnyrigg in the Battle of the Roses, a match which my travel companion James attended.