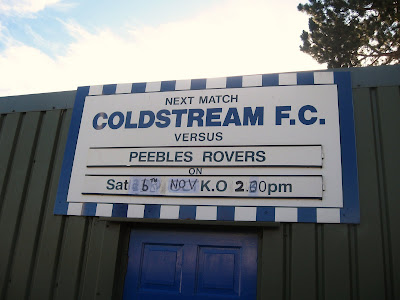 Work commitments meant I was unable to make the trip to Notts. for the big FA Cup tie, so as an alternative I decided to head north, nipping just over the border into the small town of Coldstream in Berwickshire.
Coldstream lies on the north banks of the River Tweed, the natural boundary between Scotland and England. Before the Coldstream Bridge was built in 1766, the river was forded at Coldstream and the name is a reference to the temperature of the river, which at the time was a large stream.
“The First True Border Toon” was once a rival to Gretna for quickie weddings, but is best known as the home of the Coldstream Guards, a regiment in the British Army, formed by General Monck in 1659 in support of the Stuart Restoration.

Coldstream Football Club are one of the oldest clubs in Scotland, formed in 1895. The
'Streamers' remain as one of the top sides in the Borders, having played in the East of Scotland League since its inception in 1923-24, becoming the first team to win the title and are the only club to remain as constant members of the league.
During their 115 year history the club’s main honours include lifted the Scottish Amateur Cup in 1924, the Kings Cup in 1967 and the Borders Cup on four separate occasions. Coldstream also qualify to play in the Scottish Cup from the preliminary rounds, with Home Park hosting several Scottish League clubs throughout their history. 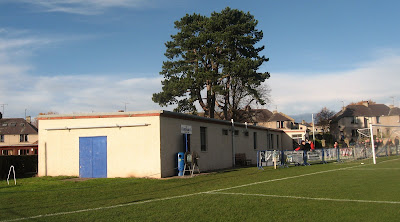 Home Park has a picturesque setting, found in the shadow of the town centre with the scenic Cheviot Hills forming a striking backdrop. The ground is close to the border which must make Coldstream’s football home either the first or last (depending on which directions your coming from) football ground in Scotland.
The clubhouse is found at the main entrance to the ground from the south west corner, off the residential Home Place, found behind the main High Street. The Jim Patterson Pavilion was opened in 1991 which incorporates the changing rooms, hospitality room, refreshment bar and lounge. The catering serves hot drinks in proper mugs as well as scotch pies which is always my favoured match day scran when heading north.
As well as funding for the clubhouse, the playing surface was also developed with newly laid turf and drainage system. The facilities were officially opened with a pre-season friendly against Newcastle United in July ‘91, the Magpies winning the match 1-0.
The nearside of the pitch has hard standing courtesy of a pathway with a few park benches for the elderly spectators. At the far side there’s another two pitches, one has floodlight facilities used for weekly training sessions.

I drove up the A697 to meet up with Jamie (squad#81) who was finally completing the set of East of Scotland League grounds. The EoSL programme has been badly hit by the heavy rainfall this week with half of today’s fixtures falling victim to the weather. Luckily the Borders has escaped the deluge, in fact it was quite glorious for November, making it a very pleasant and troublesome run through Northumberland. 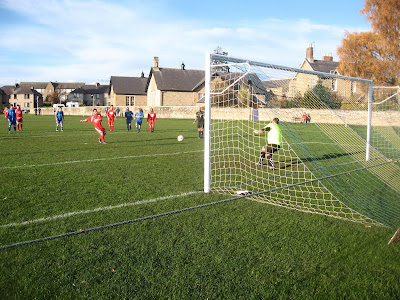 Coldstream were up against border neighbours Peebles Rovers, the match producing five goals which gave me a 5.5 goal average tally over the previous week. (Gateshead 2-3 Cambridge, Newcastle 5-1 5under1and, Billingham Town 2-4 Gateshead)
The game burst into life during a ten minute period in the first half. The visitors taking the lead after half an hour when a penalty decision harshly reduced the Streamers down to ten men. The push by the defender was a 50-50 decision that the referee got right but producing the red card was an awful erroneous verdict.
The home keeper made a fine save from the resulting spot kick, but Martin was able to make amends for his miss by netting the rebound. Within ten minutes the Peebles number six had completed his hat-trick, twice breaking through from midfield to produce splendid finishes, especially his third which was a delightful chip with the outside of his foot. The player was mobbed by his team mates, with one of his colleagues comparing him to Steven Gerrard, following his match winning hat-trick burst for Liverpool against Napoli in midweek .
Coldtream had halved the deficit in the 38th minute with a half volley from 12 yards from Lockhart, but found themselves two goals behind and down to ten men at the break. However they still made a decent fist of it in the second half, grabbing a late consolation goal courtesy of Guy, who was on fire with a fine individual effort, an aptly named scorer on the day after Bonna Night. 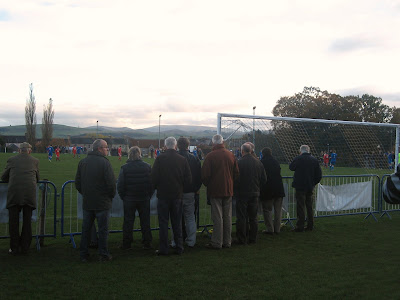