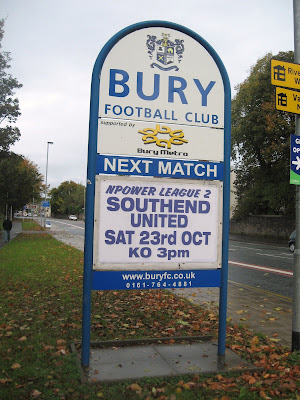 For the first time this season I found myself at a bit of a Saturday loose end. With the 23rd October being the 4th qualifying round of the FA Cup, I waited to see how the draw turned out before I made plans.
The cup draw paired the Heed away at Alty, and as I visited Moss Lane just last season, I wasn’t too bothered on making a quick return. All our local clubs in the north-east are out of the cup, so I scanned the fixtures and noticed Bury were at home, the only League club in the north of England which I’m still to visit, so I decided to sacrifice cup fever for another tick off the 92.

Bury is a former cotton mill town, located at the foothills of the western Pennines in Greater Manchester. The town lies on the River Irwell, situated in between the neighbouring towns of Bolton and Rochdale.
The town is locally renowned for its world famous open market, which has been on the same site for nearly 600 years, and amongst its many past famous residents is Sir Robert Peel.
The 19th century Prime Minister was born in Bury and introduced the modern police force (hence the terms "Bobbies") and formed the famous British Police division, 'Scotland Yard' in London.
There’s a memorial statue; Peel Tower which is situated nearly 1,000 feet above sea level, the monument which was originally built to provide work for local workers, can be widely recognised for miles around. (But I didn’t see it !?!)

The name Bury comes from an Old English word meaning "castle", "stronghold" or "fort", an early form of modern English borough. It’s pronounced differently depending on which part of the country your from, either called “ Berry” or “Burrey”
The one and only, Mark E. Smith, front man with the legendary The Fall grew up in Prestwich in Bury and at one time was a regular at Gigg Lane, he is more than qualified to tell it like it is and his own brusque way..

This year Bury FC celebrate their 125th birthday and over those many years they’ve played and remained at the same ground - Gigg Lane.
The club formed following a meeting in a local boozer between Bury Wesleyans and Bury Unitarians in April 1885. The newly merged club played their first match at the ground on the 12th September in a friendly against Wigan, which they won 4-3.
Competitive football arrived as founder members of the Lancashire League, with The Shakers winning their first trophy in the Lancashire Challenge Cup in 1892, before joining the Football League Second Division in 1894.
Neighbours Manchester City provided the opposition in the first ever League game at Gigg Lane in front of 7,070 who witnessed a 4-2 win to the hosts.
Bury are the third longest continuous members of the Football League after founders Preston North End and Notts County. The club played in the First Division until 1912 after winning promotion in their debut season and were twice FA Cup winners in 1900 and 1903.
The ground was originally part of the Earl of Derby estate, who later gave the ground as a gift in June 1922. The first structure was built on the south side in 1887 and the first ever floodlit game took place on the 5th November 1889, when a crowd of 7,000 saw Bury defeated 4-5 by Heywood Central, which took place under “Wells Patent Lights”

FA Cup success saw cover added at the Cemetery End and a new stand erected at the South side. Both end terraces were rebuilt in time for the club’s return to the top division in 1924. After promotion £12,000 was spent on a new Main Stand and seats added in the South Stand which raised the capacity up to 41,600, with further cover over the Boy’s Stand two years later.
In 1938 the Manchester Road stand was built at a cost of £3,440 which meant the ground was covered on all four sides, that was until gale force winds took the roof off the Cemetery End in 1952, which was eventually re-covered ten years later with funds raised by the Supporters Club.
In 1953 Bury became the first club in the region to have floodlights and followed Wolves example by hosting exhibition matches against top foreign clubs, as well as playing local clubs Man Yoo and Citeh. Wolves provided the opposition for the first floodlit game on the 6th October, just a week after their own lights were switched on at Molineux. It was during this era the record attendance was set, with 35,000 attending an F.A. Cup 3rd round tie with Bolton Wanderers on 9th January 1960. 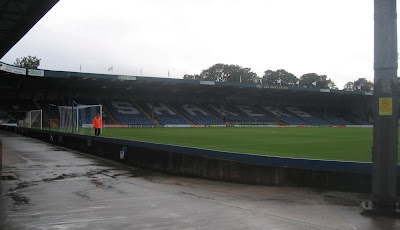 The ground gradually went into decline following the Bradford fire in 1985. The wooden Main Stand and Manchester Road end were reduced in capacity and the Boy’s Stand was removed which brought the capacity down to just 8,337.
The ground was brought back to life, being totally rebuilt between 1992 and 1999 with sufficient funds raised through the Football Trust, FA grants and the Shakers Incentive Scheme which gave Bury supporters an impressive 11,000 all seated ground.
As you walk towards the ground along Gigg Lane, the BFC Sports Bar, the Bury FC Community Trust office and the club shop are found on the approach to the stadium.
The Main Stand is through the club car park and it is from this part of the ground that access to all four stands is found.
Once through the turnstiles a walk up a flight of stairs takes you to the front of the tier. Below the seats there is some unused terracing which has brightly painted yellow exit stairs and centrally the executive club, which is a small window box structure in between the team dugouts. There’s some supporting pillars which can slightly restrict views in some areas and half the stand is used as a family section.
The other three stands are similar in design, opposite the Main Stand is the Les Hart Stand which houses the TV gantry and extends to meet the Cemetery End. The bridged corner section has a police control box suspended beneath the roof. The Cemetery End was completed in 1999 and has a large gangway at the front which means the seats are set back from the pitch.
The Manchester Road end is the away section and has an electric scoreboard, which was bought from Leicester's old Filbert Street ground.
The ground is decked out in blue flip seats with white lettering picked out at all four sides. The blue roof facades and supporting pillars all match which gives the ground an overall neat appearance. 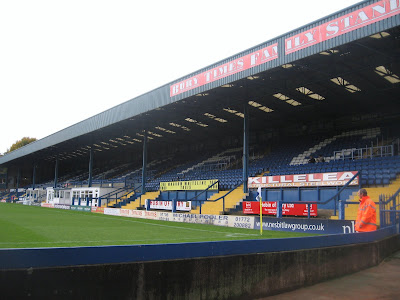 Bury’s recent run of good form continued with an effortless win over lowly Southend United.
The Shakers were gifted a dream start when Nicky Ajose was tripped in the box but Ryan Lowe failed to convert the penalty, keeper Glen Morris pulling off a fabulous save.
The Shrimpers keeper again produced another impressive save to deny Lowe, before Joe Skarz scored the games solitary goal in the 41st minute. The defender escaped his marker to neatly flick his header home from Schumacher's well-judged free-kick, which was only his second ever career goal.
The visitors didn’t offered much of an attacking threat, with their first and only serious effort arriving after 53 minutes, when Barry Corr headed over from close range when it was easier to score, then minutes later Josh Moore went close.
Bury comfortably held on to their slim advantage to take them up into third place in League Two and stretched their current unbeaten run to eight games. 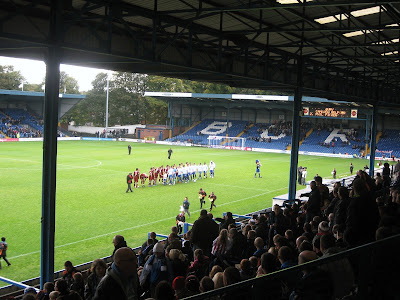 Without having much time to book cheap train tickets, the journey to Greater Manchester had to be made in the old jamjar.
After checking on google maps, I found that Gigg Lane is only 139 miles from door to door, which took me only 2 hours 20 minutes, which included the predictable hazardous wet driving conditions through the Pennines on the M62.
I arrived in Bury at 12.20pm and after heading to the ground to pick up my ticket, I had a wander around town and the famous market. As I’m a responsible driver, a pub crawl was out of the question, however I did manage the one pint, which was split in between the town’s two Wetherspoons pubs. The new Lloyds bar ‘ The Art Picture House’ is very nice having a rather striking interior.
The journey back north went smoothly, assisted by the good news on Radio Manchester that local club Altrincham had lost at home to Gateshead in the cup and also the live commentary on Real Radio of the Toon’s away win at Upton Park.
I arrived home at 7.10pm, so for a change, it was nice to be back in the house so early. The Bury trip must be my only one amongst the 92 which is quicker and cheaper to do by road than rail. However it wasn’t all good news, the prompt return meant I had to endure Saturday night TV. It wasn’t just that bliddy X-Factor I had to suffer, but also that Come Dancing carry on, where I had the misfortune to witness England’s most capped player acting like a complete and utter tool - mefinks the less said about this the better!
So overall a canny day out in Bury and the impressive Gigg Lane, even without the assistance of vast amounts of alcohol. 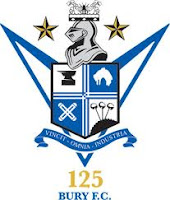 Admission complementary courtesy of our friends at Corals - Official Betting and Gaming Partners of the Football League.
(£17 ticket)

Very entertaining and informative report Shaun. I missed you by a day. I was at Gigg Lane for the FC United victory over Barrow on the Sunday: http://wherestheteahut.blogspot.com/

Thanks for the match-link to 'Wheres The Tea Hut' Shaun. I've added your excellent site to my Decent Football Stuff listings, hope you dont mind?