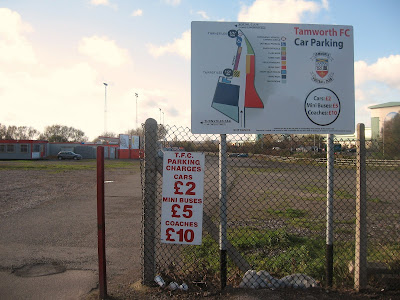 Another Conference ground and Heed away game, with a stress free trip courtesy of Cross Country Trains, which run trains directly from Newcastle to Tamworth.
Tamworth takes its name from the River Tame which flows through the Staffordshire town. Located 14 miles north east of Birmingham city centre, the town is home to the historic Tamworth Castle and Moat House, as well as The Snowdome, the UK's first full-sized real-snow indoor ski slope.
The town was the Ancient Capital of Mercia, Creoda the earliest king of Mercia came to power around 584, building a fortress at Tamworth which became the seat of the Mercia's kings.
Tamworth was once home to the Reliant Motor Company, producing the famous Robin model, which personally evokes memories of not Del Boy, but Coventry City’s Highfield Road, with the fleet of sky blue three-wheelers parked along the side of the pitch during the 1970’s 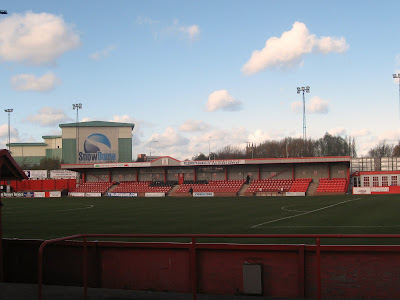 The town’s football club formed in 1933, filling the void left by the defunct Tamworth Castle F.C, who had played in the Birmingham League from 1921.
The new club started life in the Birmingham Combination, before enjoying success in the West Midlands League (former Birmingham League), winning the league title twice during the mid 1960’s, as well as further honours in the West Midlands League Cup, Birmingham Senior Cup and Staffordshire Senior Cup in the same decade.
A third championship title in 1971-72 saw promotion to the Southern League before a period in the Northern Premier League from 1979-80, where the club struggled both on the field and financially. After four seasons The Lambs returned to the Southern League, but were relegated back to where they originally started the following season.
In 1987–88 Tamworth won the West Midland League and promotion back to the Southern League, ending the decade with a trip to Wembley in the FA Vase. The final with Sudbury Town ended all square, but The Lamb won the replay 3-0 at Peterborough’s London Road.
Apart from two seasons in the Conference North between 2007 and 2009, Tamworth have played at Conference National level since 2003. The last decade saw an FA Trophy final appearance in 2003, losing out to Burscough 2-1 at Villa Park and twice reaching the FA Cup 3rd Round, playing both Stoke and Norwich City. 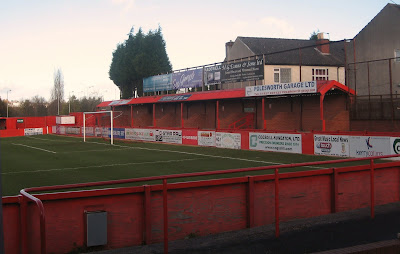 Tamworth spent their first season at the Jolly Sailor ground before making the short move across the river to The Lamb Ground, named after "The Lamb Inn", which stood for many years at the entrance to what is now the ground's car park.
In those early days, supporters created banking around the pitch with the players using the Lamb Inn as changing rooms. It wasn’t until after the war that the first significant work took place with a stand at the Cross Street side, changing rooms, clubhouse, as well as a seated stand with wooden sleeper terracing.
The record attendance was set in 1948, when 4,920 witnessed a Birmingham Combination League fixture with Atherstone Town.
In 1969 the ground acquired floodlights from Scarborough, which were switched on for a friendly fixture against Gillingham in recognition of the Gills being the club’s first Football League opposition in the FA Cup, having met in the First Round three years earlier.

Major improvements were made during the nineties. In 1993 the changing rooms were replaced and the club house extended, with a new covered terrace at the Meadow Street end. The terrace is basically a long wall, divided into seven brick partitions topped off with a small red peaked roof which gives cover towards the back of the terrace.
The Main Stand was opened in 1996 and holds 518 red flip seats divided into six rows. The stand straddles the half way line, flanked by terracing which continues behind each goal. The Castle End is an open terrace and opposite the Main Stand is The Shed, which is a small ‘cong-iron’ construction which runs nearly full pitch length. There is five thin floodlight at the rear with the TV gantry perched on the roof.
The changing rooms are found on this side in the far corner with the turnstiles at the other side. Access to this side of the ground is found further up Kettlebrook Road then a right hand turning through a residential area.

I had a walk down to the ground at around 1145am to take photographs but was unable to gain access, so I walked around the perimeter and found a perfect spot to take some pictures. So at this point, I would like to thank the tenants of 77 Cross Street. The house sits behind the Shed End and has a perfect view into The Lamb from their driveway. I did knock on their front door to ask permission and even though there was a car parked on the drive I didn’t get an answer. There was either no one home or they spotted me from behind the curtains, thinking that maybe I was a canvasser, Jehovah’s Witness or just some bogus official. Whatever the reason, if you were either in or out - thanks very much! I was delighted with the snaps. 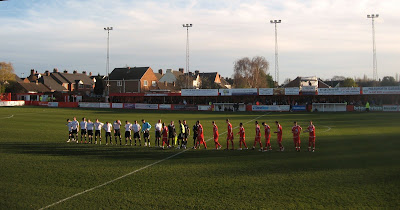 Gateshead came away from The Lamb with another well earned away point, following on from the midweek draw at Fleetwood Town.
An uneventful first half sprang into life just before half time with a Tamworth “Goal of the Season” contender (well according to the gentleman who was sitting in front of me) Jay Smith unleashing a 30 yard volley which swerved high into the net and out of the ‘keeper’s reach, as soon as the ball left his right boot you knew it was goalbound.
The introduction of striker Gary Mulligan after the break gave Gateshead a more attacking formation, which was rewarded with an equaliser in the 63rd minute. A Clark header was parried by keeper Atkins, before being scrambled home by the substitute from close range to level the score.
The game was evenly balanced and could have gone either way in the closing stages. McKenzie came closest to producing a winner, his shot was saved by Farman, who let the ball squirm from under his body towards goal, but he recovered in time to stop the ball just millimetres from the goal line.
Overall the draw was a fair result in a game of the proverbial two halves, the second period without doubt more entertaining than the first. 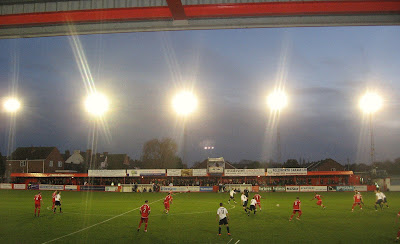 After a horrible week of gale force winds and heavy rain showers, it was nice to travel three hours south to Tamworth and be greeted by calm and glorious sunshine.
After a splendid breakfast at the West End Café on Marmion Street, I headed to the first of the five public houses I especially picked out to visit throughout the day. Those pubs being the two JDW pubs and three GBG listed; Sir Robert Peel, White Lion (which was where I met up with a raucous Heed Army) and The Albert Hotel which I kept back until later in the day, as it’s the closest pub to the station.
When I finally did call in on the Albert Hotel there was no beer left (must be closing down) so instead called in at the Tweeddale Arms, hoping for a nice quite pint and watch the live TV football before boarding the 1819, all was going to plan until the bar was invaded by the aforementioned boisterous Heed Army.

I enjoyed my day in Tamworth. The town is quite pleasant, with plenty of options for a nice pint, with the football ground nicely placed on the edge of the town centre.
The Lamb is a proper non-league ground with a few unique features which overall makes the club and town well worth a visit. 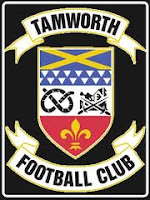 Ted Bagshaw told Tamworth Radio "If the bugger had knocked a bit louder I'd have heard him".

"I was doing the washing up in the kitchen"!

"They come round here in their rucksacks and cameras, they think they own the bloody place".