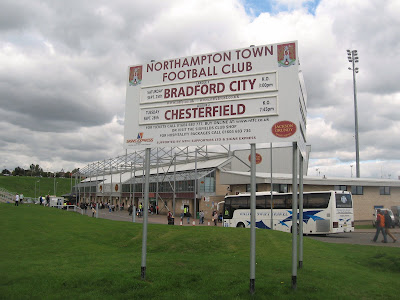 I made use of a weekend break, visiting relations in Lincolnshire to travel down to the large market town of Northampton in the East Midlands.
Northamptonshire’s county town lies on the River Nene and is well known as a major centre of shoemaking and leather industries. Many of the town’s old shoe factories remain, most of which have been converted into office space or accommodation, with some still surrounded by terraced houses which were built for the factory workers. 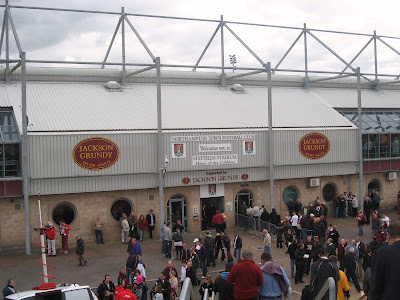 Northampton Town were founded in 1897. The county’s schools were keen on schoolboy football so meetings between schoolteachers and local solicitor A.J. Darnell took place with plans to form a town team instead of playing inter-school friendlies.
The club officially formed on 6th March 1897, at the Princess Royal Inn on Wellingborough Road, with the club agreeing to ground share with Northamptonshire County Cricket Club.
Before a ball was kicked the town’s rugby club objected to the club’s name of Northampton FC, so the Town suffix was added to their name and they began playing competitive football in the Northants League, becoming league champions in their second season.
The Cobblers played home matches at the County Ground for the next 97 years, joining the Midlands League in their third season and the Southern League in 1901-02 season, before becoming a Football League club after World War II.
The Cobblers football statto claim to fame is their record for the shortest time taken to be promoted from the bottom tier to the top tier and back down again in the space of nine years.
They played their only season in the top division in 1965-66, having been promoted from the Fourth Divison in the space of five seasons but were then relegated back to the Fourth Division by 1969–70. 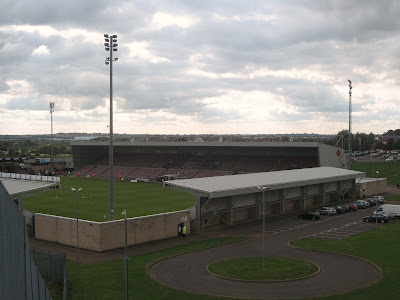 Sixfields Stadium was built and designed by Dutch contractors Bellast Nedham, with the aid of Tyneside based architects Taylor, Tulip and Hunter (I’m their postman..Morning!) and structural engineers Hutter Jennings and Titchmarsh.
After the 65 acre site was cleared, building work on the council owned facility started in January 1994. The 7,653 capacity all seated stadium on the outskirts of town was built at a cost of £5.25 million, made up from a £4.25m contribution from the council and a further £1m from the Football Trust.
The stadium had been scheduled to open for the start of the 1994-95 season, but due to delays the first game took place on 15th October. Barnet provided the opposition for a Division Three clash with the honour of the first goal going to Martin Aldridge in a 1-1 draw in front a near full house of 7,461.

The stadium is made up of four separate stands. Behind each goal are The David Bowen Stand which is named after the ex-Northampton Town player and manager, and opposite is the South Stand for away supporters which both have a capacity of approximately 900 seats.
The Alwyn Hargrave East Stand is of a similar height, but with a large gangway at the rear for disabled supporters. The stand runs pitch length and is also used as the Family Enclosure with a capacity of 1,800.
The West Stand is twice the size of the other stands with a capacity of 4,000. The stand also has the club offices and main reception, ticket office, changing rooms and supporters bar, as well as a club shop on the south west corner.
The stadium is decked out in claret seats with NTFC picked out in white lettering on the East Stand, there’s also a small scoreboard on the back of the building in the south-west corner.
The best feature of the ground is the view from the large hill which overlooks the stadium, which meant I could get some good pictures of the ground before I had even set foot in the place. During the first half there were a couple of passers by who stopped and watched the game for nowt through the opening in the north-west corner, but they weren’t lucky enough to see any goal action. 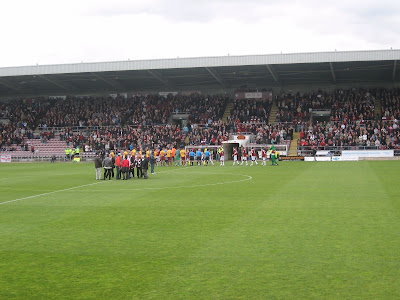 The atmosphere around Sixfields Stadium was buzzing after the midweek victory at Anfield in the League Cup. Their reward for knocking out Liverpool was a 4th round draw away to Ipswich Town, which was met with a shade of disappointment although I heard the phrase “We’ll DO them as well” mentioned by a few of the Town fans.
Because of this fantastic result, coupled with Newcastle’s equally astonishing win at Chelsea, meant I headed off from Lincolnshire to Northampton, not sure whether or not my final destination was Sixfields, just in case both clubs met in the next round.
The odds of Northampton drawing Newcastle were pretty remote, but I still got my mate Zippy to text me the outcome of the draw, as I’d rather tick off Northampton while watching United play there, than go as a neutral. I also had a Plan B lined up (Stewarts & Lloyds Corby in the FA Cup) just in case, but obviously the draw panned out as we all expected, the reward for beating Chelsea is - Arsenal. (and people wonder why NUFC haven’t won anything for a long time…Eddy) 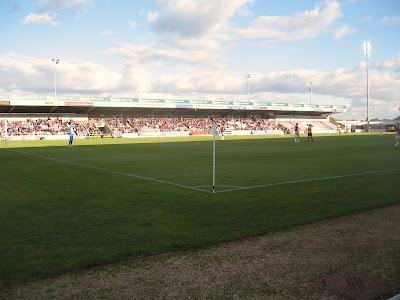 Northampton showed no cup hangover as they overcame a stubborn Bradford defence with two goals in the second half.
The opening period was a scrappy affair, the hosts best efforts coming directly from free-kicks from Kevin Thornton, while City came closest to scoring when a Moult effort produced a fine save from Dunn.
The Cobblers improved as the game progressed and were patient enough to break down Bradford’s resistance with a goal just after the hour. A Tozer free kick from the half way line was nodding over by Holt into the path of McKay, who turned the ball in from ten yards.
The win was guaranteed with just under ten minutes remaining, a deep cross was headed back into the centre by McKay for Newcastle loanee Ben Tozer to open his account on his Northampton league debut.
This win rounded off a fantastic week in the history of Northampton Town. I had this fixture picked out early in the season so it’s pleasing that my visit coincided with a great atmosphere around the club after such a fine achievement. The Cobblers could well reach the League Cup quarter-finals if they can DO! Ipswich that is, which will be better than my own (looks likely..Eddy) as well as a few other big Premier League clubs have managed to do this season. 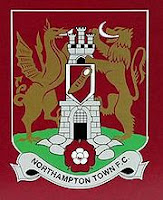