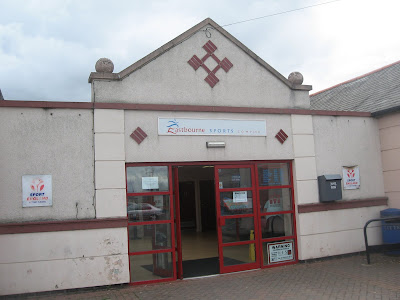 Three new clubs entered the Wearside League this season, two of which met on the opening day of the season at the Eastbourne Sports Complex.
This is the fifth season of the current Darlington Cleveland Bridge, having played two years in local leagues followed by two seasons in the Teesside League.
The original club formed in 1903 as a works team for employees only. They began playing at a higher level in 1981 when joining the Northern Alliance, which they won in 1982-83. The following season they stepped up to the Northern League, playing in the Second Division and changing their name to Darlington Cleveland Social in 1993-94. The club folded early in the 1996-97 season after losing all eight matches. The factory closed and their Neasham Road ground where they had played since their formation was sold off for housing. 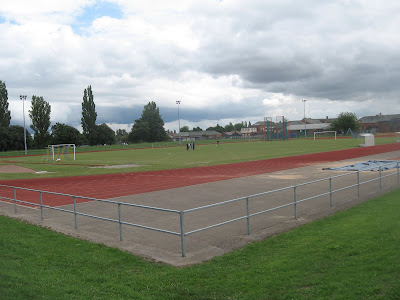 The Eastbourne Sports Complex is found on the edge of Darlington town centre just off Yarm Road. The players use the changing rooms in the complex building, which means a long walk through the car park to the pitch. The ground has full athletics provisions surrounded by a running track. There’s a storage block which has refreshment facilities and a slight overhanging roof which acts as the only spectator shelter.
At each side of the pitch there is raised grass banks, with the far side giving the best view being closer to the pitch. 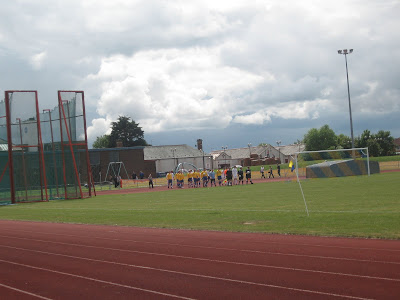 Cleveland Bridge entertained Prudhoe Town, who have returned to competitive action after a year out after resigning from the Northern League at the end of the 2008-09 season.
The home side only took 8 minutes to score their very first goal in the Wearside League, Ripley pounced with a close range volley after a mix up in the Prudhoe defence.
Further first half strikes from Richardson who finished well after beating the offside trap and a shot from the edge of the box from substitute Wilson but the hosts in a commanding position at the break.
During the first half I noticed a spectator sporting a Plymouth Argyle shirt, I surmised that this could only be one person, as there can’t be that many Pilgrims fans in County Durham. My inkling was correct when I was approached at half time by 100FgC squad#138 Lee Stewart who introduced himself and together we watched the second half. 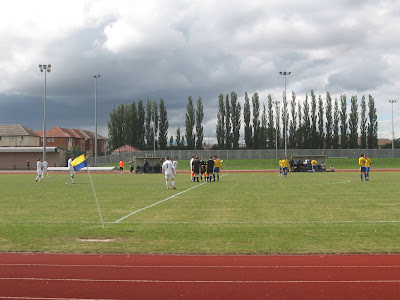 When Ripley added his second goal of the afternoon it was a case of just how many more Cleveland were going to add to the four goal bagged in the opening 48 minutes.
Prudhoe improved as the game progressed and Best reduced the deficit on 65 minutes, which looked no more than a consolation, but with five minutes remaining he added his second with a close range header after the initial shot came back off the crossbar.
In the last five minutes Town missed numerous chances, creating more in the dying embers of the game then they had in the opening 85 minutes. If the game had gone on for a further ten minutes you would have fancied Prudda to grab a point. Overall the game was quite entertaining and Cleveland Bridge can be pleased with their encouraging start. 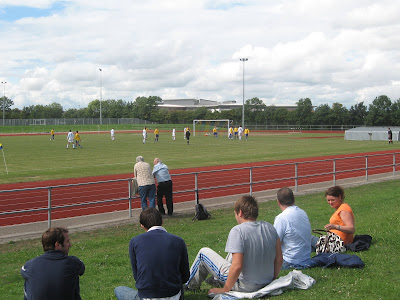 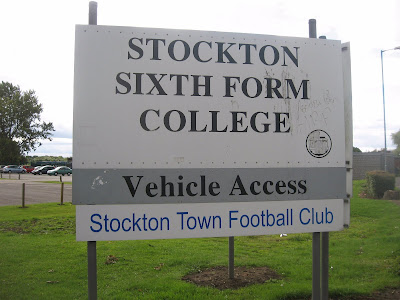 The other new Wearside League club this season are Stockton Town, this being only their second season in senior football after playing in the Teesside League last season.
The club originally formed in 1979 as Hartburn Juniors, fielding their first side in the Teesside Junior Football Alliance at Under-12 level. In 2003 they became Stockton Town having obtained the FA Charter Standard for Clubs the previous year.
The club now runs seventeen sides from boys under-7’s to under-18’s, along with the senior side, Reserves and three girls teams. 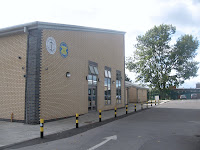 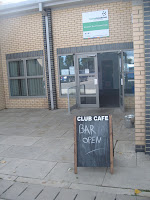 rm College and Our Lady & St Bedes School.
The entrance is shared with the college, at the far side of the car park is the clubhouse which has a fully licensed bar which has live big screen football (On them dodgy channels…Eddy) and also houses the changing room facilities.
The pitch is at the side of the clubhouse and behind the neighbouring school, which is quite a walk away over two other football pitches at the far end of the field. The pitch is fully fenced off, surrounded by hard standing with a pair of Perspex dugouts. 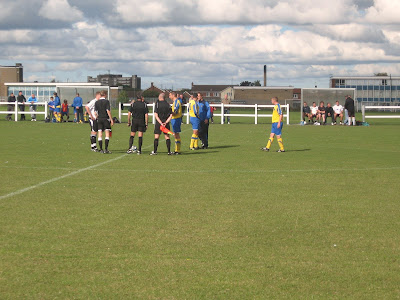 My second game in the Wearside League this season saw the same score line as my previous encounter, with the home side again coming out on top.
Stockton took an early lead with a header from Scott Hine from eight yards out which went in via both the goalkeeper and crossbar, as they comfortably held on to their one goal advantage until half time.
Boldon started the second half well and early pressure was rewarded with a penalty on the hour from Meak, who was brought down by ‘keeper Swann in a one-on-one situation, although the referee’s decision was very harsh indeed.
The goal was a wake up call for Stockton, within eight minutes they lead 3-1 with striker Hines completing his hat-trick. His second goal was a cool finish, going round the ‘keeper before slotting the ball home and his third was from the penalty spot, the referee levelled things up making it once each in bogus penalty decisions.
The visitors reduced the arrears in the last minute with a fine finish by Hudson, but never threatened in time added on, instead it was the hosts who clinched it with substitute Ballantyne capitalising on a defensive error, allowing him an easy finish to wrap up the three points. 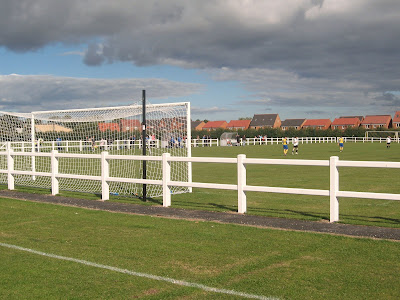 During the interval myself and my son James wandered into the clubhouse and after a spot of channel hopping the barman found the Everton v Newcastle game, which I was delighted to viddy during the half time break. The match finished at 4.15pm which gave us a good 35 minutes left of the match at Goodison to watch, so after racing back to the clubhouse imagine our disappointment when we found a blank screen on the wall, accompanied with the words ‘No signal’ (Dodgy channels indeed…Eddy) so we had no choice but to head back home, having to settling on listening in on tin-pot local radio. 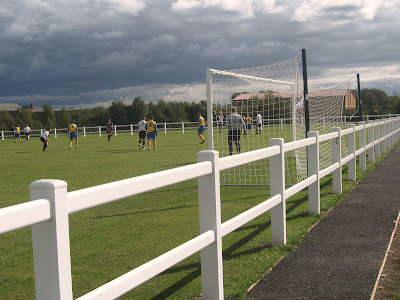