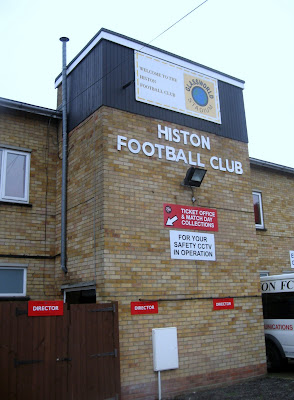 A midweek trip to Histon FC, who are based approximately 3 miles north of Cambridge in the twin villages of Histon and Impington. The journey down to Cambridgeshire was made courtesy of Torchey Travel’s executive car (est.2008) the most comfortable and reliable way to see the Heed Army on the road.

Histon Institute F.C. formed in 1904, originating from the Chivers jam company, the major employer in the area, whose Chairman John Chivers helped to form the Histon Institute in 1903. The company donated a rose covered field for the team to play on, which is commemorated in the rose on club’s crest. They played their formative years in the Cambridgeshire Football League, dropping the Institute tag from their name in 1952. 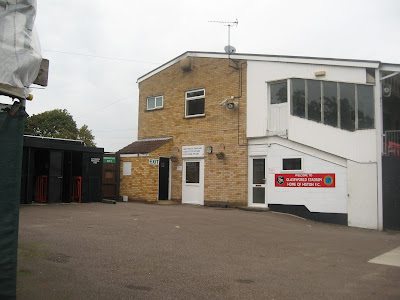 In 1960 the club joined the Delphian League for three years until the league disbanded with the affiliated clubs joined the Athenian League. A switch to the Eastern Counties League in 1965 saw “the Stutes” play in the ECL leagues for the next 35 years, as the competition switched to a two tier format in 1988.

The club have made rapid strides since the turn of the millennium, beginning with winning the ECL Premier Division title in1999–2000. Histon went on to win promotion from the Southern League East Division in their third season and followed up this achievement by becoming Southern League Premier Champions at the first attempt.
In their first Conference South season in 2005-06 they finished in 5th place, but missed out in the play-offs, losing the final 2-0 to St Albans City, however the following season the club were league champions, clinching their fourth promotion in 7 years.
The club finished off a remarkable decade by finishing 7th in their first Conference season, with the club’s biggest home attendance of 3,721 seeing Histon beat local rivals Cambridge United 1-0 on New Years Day.
They finished third in their second season, qualifying for the play-offs, where they were defeated 2–1 on aggregate by Football League bound Torquay United in the semi-final. However the highlight of that season was reaching the 3rd round of the FA Cup for the first time, after beating both Swindon Town and Leeds United 1–0 at home they succumbing to Swansea City, 2-1 at home in the 3rd round. The Leeds United cup tie saw a new record crowd of 4,103 as well as a national TV audience on the Beeb witnessing the most memorable day in the club’s history. 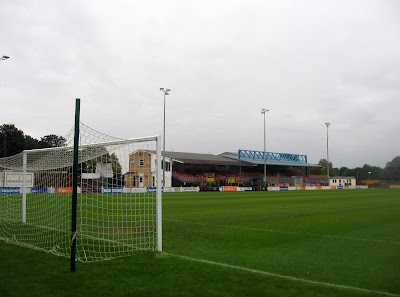 Bridge Road is now know as The Glassworld Stadium and has a capacity of 3,800 with approximately 1,700 covered seats
The original Recreation Ground was repositioned due to road works in early 1960’s,with the B1049 road built across the old ground. The pitch was re-laid and an elevated stand was built in 1964. Floodlights were added in December 1984 before a match with Arsenal.
The stadium has undergone major redevelopment in recent years, bringing the facilities up to the required standard to host Conference football and eligible to host League Two if the club should ever progress.
The Main Stand has a capacity of approximately 400. The clubhouse is at the top of the stand which looks directly out towards the pitch, with access gained via a staircase at the front, situated behind each dugout. The stand has been extended with an extra 500 seats added when the Cambridgeshire FA set up their headquarters at the ground in 2007.
The stand at the far side runs pitch length with five rows of red flip seats with a capacity of 800, which was completed in April 2008.
There has full cover behind each goal. The away supporters are giving the Bridge Road end, while opposite is the Rec End which was completed with extra cover added in 2008.
These three sides are similar in size and have been linked together by an advertising fascia board which runs around the top of the roof and finishes off the ground to give it a much smarter appearance.
The Glassworks Stadium is now owned by Histon Football Club Holdings trust, who guarantee the use of the facility for sports purposes, with the football club able to use the ground rent free. 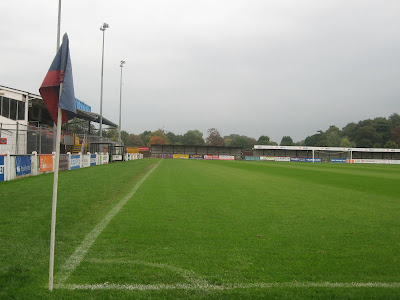 Craig “Nelly” Nelthorpe scored twice as Gateshead’s good run of form continued with a comfortable win in Cambridgeshire.
Gateshead took an early lead when Gary Mulligan got on the end of a Jon Shaw header to poke the ball home from close range.
The Tynesiders went close with headers by Curtis and Shaw, until Nelthorpe doubled the lead with a goal of the season contender.
The winger ran on to a flicked header from Shaw to unleash a 30-yard volley with the outside of his left foot, to leave home keeper Joe Welch clutching fresh air.
The hosts offered little threat in the second half, with boss David Livermore reluctant to make any changes, only making one substitution with just ten minutes remaining.
The Heed wrapped up victory in the dying minutes with a second goal from Nelthorpe, getting on the end of a good run and cross from Fisher to produce a tidy finish.
There was still time for Omar Riza to pull one back from the penalty spot in injury time, after a trip on substitute Adjei, which made the score line look a bit more respectable as overall Gateshead dominated the match throughout against a very poor Histon side. 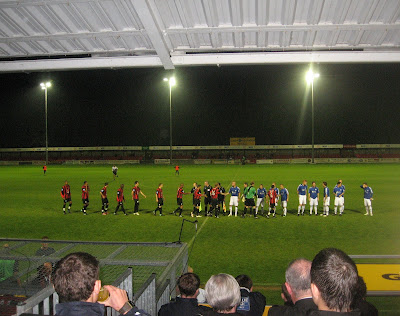 Torchey Travel departed Gateshead at 1.15pm, the journey went pretty smoothly, arriving in Histon by 5pm. The car was taking up by Squad#51 John Young (aka Torchey) Simon Heedgroundsman and co-driver Kav, who produced an impressive performance behind the wheel to get us there and back in good time.
Since my last trip with Mr Young he has developed a love of Gaelic Scottish Mouth Music, which myself and the other two passengers had to reluctantly listen to, meaning at times we felt like our ears were bleeding as he blasted it out through the car’s CD system.
On departure I requested if possible, to arrive at the ground while it was still light, so I could get some decent pictures before nightfall. Luckily on arrival there was an open door into the stadium, so I was free to walk the perimeter of the ground and get the photographs I wanted. (it was as if someone was expecting me and left the door off the latch)
We stopped off for drinks at the Rose and Crown and bait at the Railway View. It was here that Kav, who is well known within the Heed Army to be quite frugle with his money, mentioned that he should have came into the ground with me earlier and stayed there until kick-off, hence saving fourteen quid! The thought of a big lad like Kav trying to hide behind a seat for two hours to save some money would have been a sight to behold, and knowing him, he would have probably gotten away with it.
You may remember earlier in the season I came straight from my holidays and within hours I was off to see Gateshead play at Forest Green. Well John was doing the same thing but in reverse, as he was off to Magaluff when he got back home, having to be at Newcastle Airport for 4am, because of this we were back on the road straight after the full time whistle.
After disappointing away day Tuesday’s last season, how great it was to endure the long journey home with three points in the bag and a great performance from the lads. Having slept most of the way home I arrived back at 1.30am, content with not just the win, but the first class service provided by Torchey Travel, all for the value for money fare of just seventeen English pounds.